Guns and beer -- a potentially dangerous combination in the real world. But how about in your investment portfolio?

Today, we'll be taking a look at one of the world's largest beer makers -- Anheuser Busch (NYSE:BUD) -- and the gunmaker-turned-outdoorsy-specialist American Outdoor Brands (NASDAQ:SWBI), which is better known by its former name, Smith & Wesson. 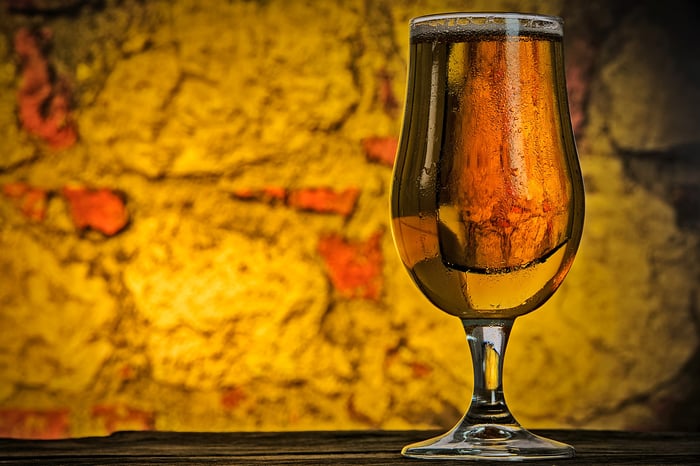 So which "sin stock" is the better buy today? It's impossible to answer this question with 100% certainty. But that doesn't mean we shouldn't try. By evaluating the companies through three critical lenses, we can get a better idea for what we're getting if we buy shares.

The most important thing for long-term investors to evaluate is the sustainable competitive advantage -- or "moat" -- of the companies they are investing in. In a nutshell, a moat is what keeps customers coming back for more, year after year, while the competition tries in vain to take a bite out of sales.

The key moats for Anheuser are its brand and scale. After acquiring SAB Miller last year, the company became by far the largest brewer in the world, giving it economies of scale that smaller competitors can't imagine benefiting from. At the same time, the company's brands -- Budweiser, Corona, Modelo, and Stella Artois, to name a few -- are some of the most recognizable in the world. While craft brewers are taking more and more market share from Anheuser, the company has responded by simply acquiring a number of them, like Wicked Weed, Karbach, and Devils Backbone.

American Outdoor Brands, on the other hand, counts on its signature Smith & Wesson guns for a large chunk of its sales. Realizing that it needed to diversify, the company changed its name and focus to include other outdoor activities such as hunting and camping last year. As with Budweiser, the strength of the company's brand is the key to survival. Unlike Budweiser, however, that brand is nowhere near as valuable.

Investors usually like to see extra cash on hand being used for two things: aggressive reinvestment in growth opportunities, or paybacks to shareholders -- either through share repurchases or dividends.

But there's something to be said for keeping a boring old pile of cash on hand. That's because every company, at one point or another, is going to face difficult economic times. Those that face such times with cash on hand have a chance to emerge stronger: by buying back their own shares, acquiring rivals, or -- most importantly -- outspending the competition to gain long-term market share. Those in heavy debt are extremely fragile in such environments.

Here's how the two stack up in terms of financial fortitude (keep in mind that Anheuser's valuation is 220 times the size of American Outdoor):

To be honest, I'm not a huge fan of either company's balance sheet. While both have more than enough cash flowing in to meet their obligations, their recent run of acquisitions -- SAB Miller for Anheuser, Taylor Brands and Ultimate Survival for American Outdoor -- have made the balance sheets fragile.

Of course, that's sometimes necessary to build up a long-term moat, but it can still make the companies vulnerable during an economic crisis.

And finally we have the can of worms that is valuation. There's no one metric that can indicate just how expensive a stock is. Instead, I like to use a number of data points to get a more holistic picture:

Currently, Anheuser looks more expensive than it really is because of its acquisition spree. That being said, even without the impact of acquisitions, it would still be nowhere near as cheap as American Outdoor. In an ironic twist, it turns out that when Republicans are in power, fear about guns being taken away evaporates -- which is actually bad for sales. With that party controlling the White House and Congress, sales have been depressed.

On the other hand, Anheuser offers a dividend that is hefty and -- after cash flow has normalized following the acquisitions flowing through -- sustainable.

In my opinion, this round a draw: American Outdoor is cheaper, but Anheuser gives you a very nice dividend.

So there you have it: Both companies have attractive value propositions, and not-so-great balance sheets. The key differentiator is the moat, and in that respect Anheuser Busch comes out ahead.