On Apple's (AAPL -4.91%) most recent earnings conference call, analyst Brian White observed that the overall smartphone market has seen a slowdown to a "low single digit percentage" -- down substantially from the kind of explosive double-digit growth seen in the heyday of the smartphone revolution.

He then went on to ask CEO Tim Cook the following question: "So, as we look forward maybe three to four years, do you think Apple can expand its unit market share? And, if so, what will the drivers be?" 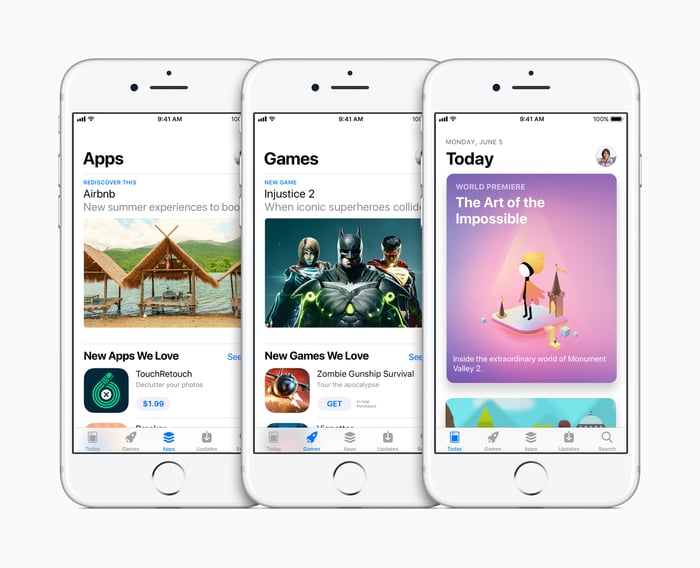 Installed base and switchers

Cook began by saying that he thinks that Apple can grow its smartphone shipments as well as its market share, though he made it clear that the company doesn't officially "predict those things" and that this was explicitly Cook's opinion and not officially Apple's.

He pointed to a growing installed base as a source of growth as something that will "generate more upgrades over time."

That's sensible considering that even if the percentage of iPhone users who upgrade to new devices stays flat or even comes down in a year, a larger overall installed base could lead to more overall iPhone shipments.

Cook also indicated confidence in Apple's ability to "convince people to switch" (presumably this is partially informed by Cook's visibility into Apple's product pipeline that investors don't necessarily have).

"It was a record for us, so we see a lot of opportunity in these markets," added Cook.

I think that Cook is right that Apple can convince more Android users to switch to iPhone, assuming, of course, that Apple delivers the right products to drive such switching activity.

The Android smartphone makers aren't going to go down without a fight, and you can be sure that they will continue to invest heavily in trying to defend themselves against Apple by trying to cram in every whiz-bang feature that they (or, more likely, their component vendors) develop.

Apple, of course, has advantages in brand power, sheer research and development might, and possibly more supply chain clout than any other single smartphone maker on the planet today.

It'll be critical for Apple to drive technology development -- both internally and among its independent suppliers -- as aggressively as possible.

On that point, given that third-party suppliers, quite reasonably, wish to diversify away from Apple to increase their revenue while reducing their risk (it's not pretty when a company bets it all on Apple and then Apple packs its things and goes).

And by the time competitors catch up to what Apple is doing, it could conceivably be on to the next big thing.

That's why it's critical for Apple to have chip development in-house, and that's why it's imperative for the company to increasingly take critical user experience-impacting technologies like displays into its own hands, too.

Good thing Apple continues to increase its investments in research and development to do exactly what I've described here.