User metrics are incredibly important for social media companies, since advertisers follow eyeballs. As such, slowing user growth was easily the first red flag that investors noticed when Snap (NYSE:SNAP) filed its S-1 Registration Statement with the SEC in February of this year ahead of its March IPO. As it turns out, larger rival Facebook (NASDAQ:FB) already knew that user growth on Snapchat was quickly decelerating.

The Wall Street Journal reports that Facebook had an inside track due to its acquisition of Onavo a few years back, a small mobile-analytics company that reportedly fetched $100 million to $200 million. Onavo had two main offerings: technology that helped optimize performance and battery life, as well as analytics that could help developers understand the marketplace. Facebook initially said the primary purpose for the acquisition was Onavo's data compression technology, which could help with its efforts to bring internet connectivity to emerging markets. 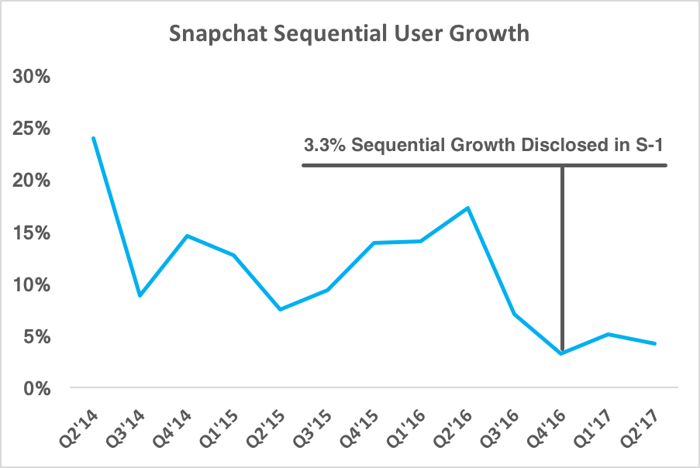 However, Onavo's analytics gave Facebook an early preview as to how Snapchat was performing, even when it was still a private company. Specifically, Facebook knew that Snapchat didn't add many users in Q4 2016.

Facebook knows what you've been doing (if you use Onavo Protect)

The Onavo Protect app that is available on iOS and Android is billed as a way for users to keep data secure and private by creating a virtual private network (VPN). This can be useful in protecting against malicious sites or phishing attempts.

The iOS App Store listing makes it clear: "To provide this layer of protection, Onavo establishes a secure connection used to direct all of your network communications through Onavo's servers. As part of this process, Onavo receives and analyzes information about your mobile data and app use." What's less clear upfront is that "Onavo's servers" really means "Facebook's servers."

It's this routing of traffic through Facebook's servers that gave it insight into how Snapchat was faring. The dominant social network is able to analyze the traffic data to see what apps people use, which Facebook reportedly then uses in planning its product roadmap and considering what services to develop. While 24 million downloads of Onavo Protect certainly doesn't cover the entire installed base, it's quite statistically significant, so Facebook could derive some meaningful competitive insights.

This report is one of a couple ironic (and somewhat shady) storylines recently. Facebook is reportedly interested in developing video chatting hardware, which might be able to monitor you at all times using artificial intelligence; Mark Zuckerberg tapes over his laptop's webcam and microphone due to privacy concerns.

Now, Facebook appears to be using a data security and encryption app to glean insights into user behavior. It wouldn't be a stretch to say that Onavo Protect is effectively a form of spyware (which some user reviews argue that it is), even if users blindly agree to the terms and conditions.