Please ensure Javascript is enabled for purposes of website accessibility
Log In Help Join The Motley Fool
Free Article Join Over 1 Million Premium Members And Get More In-Depth Stock Guidance and Research
By Brian Feroldi, Rich Duprey, and Demitri Kalogeropoulos – Aug 16, 2017 at 6:00AM

Looking for a few stocks that hold massive upside potential? JD.com, Take-Two Interactive, and Novocure could be for you.

Long-term investors in the Priceline Group (BKNG -2.13%) are sitting pretty. Anyone smart enough to pick up shares of the travel giant a decade ago is currently sitting on a gain of more than 2,310%. That's a big enough gain to create a life-changing amount of money.

So which stocks do we Fools think can deliver those kinds of returns for their shareholders from here? We asked a team of investors to answer that question and they picked JD.com (JD -1.85%), Take-Two Interactive (TTWO 0.39%), and Novocure (NVCR -1.39%). 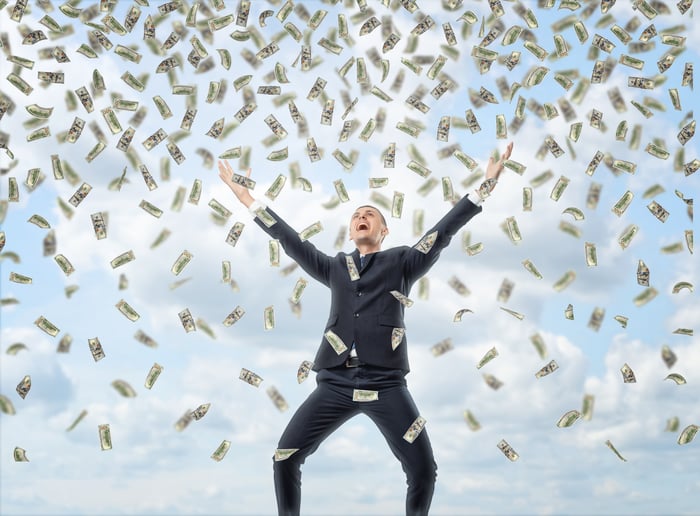 Selling into the world's biggest market

Rich Duprey (JD.com): Alibaba may dominate the Chinese e-commerce scene much in the way Amazon.com does in the U.S. markets, but don't discount the power and potential of JD.com, China's second-largest site and one that's diversifying into data, cloud, and artificial intelligence services like you see from Amazon Web Services.

JD.com has distinguished itself from its primary rival by developing a network of warehouses compared to the marketplace model of Alibaba that serves as more of a middleman between buyers and sellers. In many respects, JD is using the Amazon model instead of the one offered by its domestic competitor.

But it's not above stealing a page or two from Alibaba, either. The e-commerce giant's Singles Day sales event is the world's largest retail sales day that generated some $17 billion in revenue last year, but JD.com, in partnership with Wal-Mart, which has taken a 12% stake in the e-commerce site, is launching its own version.

Called 8.8 -- eight is apparently a very lucky number in Chinese culture -- JD and Wal-Mart started a massive promotional event for Aug. 8 that they hope comes to rival Singles Day, which falls on November 11 (11.11) each year.

Last quarter, JD said active customer counts surged 40% and revenue rose 41%, beating analysts expectations of a 36% rise. While the investments it is making in these ancillary businesses will provide something of a drag on earnings this year, JD.com is a stock that could continue soaring year after year and turn into a humongous multibagger.

Small fish in a huge pond

Demitri Kalogeropoulos (Take-Two Interactive): The video game industry is a great place to be doing business right now. Game engagement soaring, and digital content delivery is opening up new revenue streams while lengthening both the life cycle -- and the profitability -- of high-production value titles.

With its relatively small portfolio of franchises generating choppier profit results, Take-Two has been overshadowed recently by much larger rivals Activision Blizzard and Electronic Arts. Yet these companies show just what's possible for the Grand Theft Auto owner if it succeeds at bulking up its release pipeline. After all, Activision and EA are both enjoying surging profit margins and record cash generation right now.

Take-Two's latest results suggest it has plenty of room to expand in that direction. Revenue spiked higher by 34% last quarter thanks to solid contributions from its recent NBA 2K17 release and more spending within Grand Theft Auto V, which is now four years removed from its initial launch.

CEO Strauss Zelnick and his team raised their fiscal 2018 outlook in early August, but many investors are already looking ahead to the following year when it releases the next chapter in its massive hit, Red Dead Redemption. Take-Two hasn't detailed all the new properties it is currently working on, but even two successful franchises would go a long way toward filling out its portfolio and helping power years of increasing revenue and profitability.

Blazing new trails in the fight against cancer

Brian Feroldi (Novocure): Glioblastoma multiforme (GBM) is one of the most aggressive and deadly forms of brain cancer. More than 12,500 patients are diagnosed with this disease each year in the U.S., and even when patients are treated with surgery, radiation, and chemotherapy, the five-year survival rate is an abysmal 5%.

Novocure is on a mission to give cancer patients far better odds than current standard-of-care treatments allow. The company developed a product called Optune that administers a new type of therapy called Tumor Treating Fields (TTFields). TTFields use electric fields to inhibit cancerous cell from dividing. As a result, tumors have a much harder time growing inside a patient.

This technology might sound like voodoo (I was highly skeptical when I first heard of it), but NovoCure has the clinical data to prove that TTFields are the real deal. The company released data from a five-year study showing that using TTFields with standard-of-care therapy caused the survival rate of GBM patients to almost triple to 13%. What's more, TTFields therapy is noninvasive and is shown to produce almost no side effects. That stands in stark contrast to other types of cancer treatments.

Given the clinical advantages of TTFields, sales of Optune have been skyrocketing. Novocure's revenue grew by 137% last quarter to $73 million. While the company is still losing money, its fast-moving top line allowed its net loss to fall by nearly half.

Looking ahead, Novocure's growth runway looks massive since it has only captured a tiny fraction of the GBM population domestically and abroad. Management is also investing heavily to expand Optune's labeling to include lung cancer, ovarian cancer, pancreatic cancer, and mesothelioma. If they succeed, then Novocure's investors (like me) could be poised to capture market-thumping gains for years to come.