Amazon is doing great damage to tax paying retailers. Towns, cities and states throughout the U.S. are being hurt-many jobs being lost!

Just four hours later, this statement had been retweeted nearly 9,000 times, while also garnering more than 31,000 "likes" and 17,000 replies from other Twitter users. Trump clearly hit a nerve, here.

That's not always the same as hitting his mark, though. Let's run some numbers to fact-check Trump's inflammatory tweet. 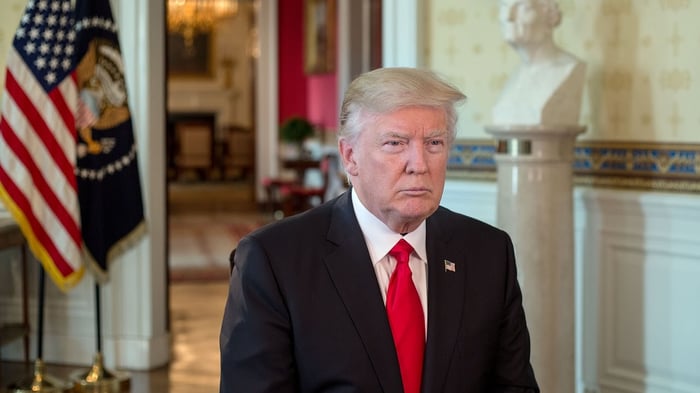 Let's start with the central argument of Trump's tweet. Is the American retail employee really a dying breed?

According to data from the Bureau of Labor Statistics, that's not really the case:

That's the total number of retail trade employees in the U.S. over the last decade, using seasonally adjusted data. The economic crash in 2008 brought the retail industry to its knees for a while, and employment in the sector dropped by 6% before hitting rock bottom in 2010. From there, retailers bounced back to increase their payrolls by nearly 8%. That growth has stalled over the last year, but we're hardly looking at a dead industry here.

Some retailers have fared better than others in the last 10 years. For example, Wal-Mart Stores (NYSE:WMT) increased its employee count by 9.5%, landing at 2 million full-time and part-time workers. Ross Stores (NASDAQ:ROST) doubled its payroll, to 78,600 employees. Sears Holdings (NASDAQ:SHLDQ), on the other hand, saw its Sears and K-Mart payrolls plunge 58% lower, stopping at 140,000.

The rising employee counts at Wal-Mart and Ross prove that a well-managed retailer can grow its business, even while Amazon is stealing market share from the bricks-and-mortar shopping sector as a whole. And the retail sector is keeping plenty of workers' feet on the store floor overall, as shown by the government's own data.

Sears is the poster child for failing retailers these days, but that's due more to gross mismanagement than to Amazon stepping in to attack that company in particular.

If Amazon is guilty of anything, it would be of making consumers expect lower retail prices in general. The retail chains that have held up well under this pressure tend to specialize in low-cost goods, leaving many upscale specialists withering as their profit margins dwindle. It is almost impossible to find a large old-school retailer whose operating margins haven't faded over the last five years.

Trump entered the White House based on a message of business-friendly policies and an understanding of what makes American businesses tick. However, this tweet only shows him to be out of touch with the retail industry's actual state of health and with the forces that are driving retailers into a new era. If you can compete with Amazon and its online peers based on price and convenience, you'll do fine. Ross is doing it without much of an e-commerce strategy, after all.

Killing Amazon's e-commerce business by hook, by crook, or by draconian policies would do nothing to revitalize the American mall -- other low-cost shopping solutions would quickly step in to keep the pressure on. Fresh thinking might, but I'd be a highly paid retail consultant if I knew exactly how.

Stay tuned, Donald. The retail industry will keep evolving whether you like it or not.