Virtual Reality (VR) is one of those technologies that's been promised for years, but has -- until recently -- failed to live up to the hype. There's plenty of evidence pointing to a bright future for VR, but investors need to know a few things first -- like how big the market will be, what the risks are, who the key players are, and why they should to play this strategy out over the long term. So, let's take a look at six things you should know before investing in VR.

1. Understand how big the market could be

Grand View Research estimates that that the global VR market will be worth $48.5 billion by 2025. That's the top-end of some estimates and others range from $7.5 billion and $22.5 billion. The VR market was worth just $1.8 billion last year, which means virtual reality is poised for huge growth no matter which estimate is more accurate. 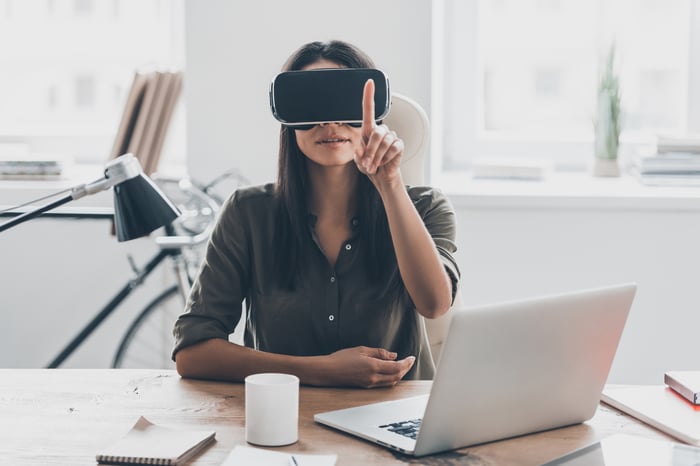 VR investors need to keep in mind that this technology will likely need more time to get off the ground, mainly because of virtual reality's expensive hardware costs. Consider that when Facebook's (NASDAQ:FB) Oculus launched its high-end Rift headset. It priced the device at $599 and its Touch controllers at $199. That's a hefty price tag for most consumers and Oculus ended up dropping the price of its VR package twice to its current $399 price tag for both the headset and controllers.

But most consumers still don't have an extra $400 to just spend on VR equipment, and these price points are going to keep mainstream consumers away from high-end VR tech for a while.

Additionally, high-end VR equipment requires lots of processing power to deliver high-quality graphics with low latency (so that the virtual world moves smoothly as a user looks around). NVIDIA Corporation (NASDAQ:NVDA) noted last year that less than 1% of PCs were capable of running high-end VR, and while that percentage has likely gone up this year, investors need to remember that most consumers won't be using high-end virtual reality for many years.

One of the great things about VR investing is that there are several avenues investors can take in order to benefit. If you're interested in chipmakers, then you can invest in NVIDIA, which makes graphics processing units (GPUs) that are the go-to high-end chips that PC makers choose for their graphics processing needs. NVIDIA makes about 53% of its total revenue from the gaming segment (chips for gaming processing), which makes the company a keyer in the VR space.

If you're looking for a solid hardware and software VR play, then there's Alphabet's (NASDAQ:GOOG) (NASDAQ:GOOGL) Google. The company has focused its attention on the mobile VR market, and it's already getting far out ahead of its competition. Google's Cardboard and Daydream View headsets are by the far the best selling mobile VR headsets on the market, accounting for 69% of mobile VR headsets sold last year.

Additionally, the company's Daydream platform -- where users can download more than 100 VR apps -- is one of the first, and only, of its kind. Google is quickly building its mobile VR dominance in the same way it did with Android and is already figuring out how to earn money from VR through advertising.

I've already mentioned Facebook, NVIDIA, and Google, but plenty of other technology companies are looking to virtual reality for more growth. Sony (NYSE:SNE) has an advantage in the console market after the company released its PlayStation VR headset that works on current versions of its PlayStation 4. The company has already sold 60.4 million PS4s to date and has already sold more than 1 million VR headsets since its launch last October.

The sheer number of PS4 consoles on the market make Sony an attractive VR hardware play, and considering that the company's Game and Network Services segment (which includes its console sales) accounts for the majority of its total revenue, then Sony could certainly benefit if headset sales continue to expand.

Intel (NASDAQ:INTC) has also made several moves indicating that the company wants to be a serious virtual reality player. Most recently, the company has started hiring engineers that can build high-end graphics processors. The company may still be a few years away from fully realizing those ambitions, but in the meantime Intel is working on a VR headset, called Project Alloy, that can has all the internal processing power built into it. This means that the headset doesn't need to be tethered to a PC in order to deliver a high-end VR experience.

One thing VR investors should remember is that many companies that are betting on VR are also making plays in the augmented reality (AR) space as well. Augmented reality is the digital overlay of information onto the real world and its so entwined with VR that investors may end up benefiting from both.

For example, I mentioned earlier that Google is doing quite a lot in VR, it also just relaunched its Google Glass device, which is being tested out by healthcare professionals, factory workers for General Electric, and package distribution for DHL. Because VR and AR share similar tech (like headsets, displays, 3D digital information, and graphics), there's lots of overlap between the two that could end up being a hidden benefit for VR investors. IDC expects the combined total spending for AR/VR products and services to skyrocket from $11.4 billion this year to $215 billion by 2021.

6. Remember to invest for the long-haul

Facebook CEO Mark Zuckerberg has said that VR could take at least five to 10 years to truly take off. It's worth remembering that this timeframe is coming from one of the most forward-thinking tech billionaires of our time. So if Zuckerberg is playing the long game with his company's VR investments, then you can expect that you'll probably have to do the same.

And as with any investment, picking a good VR stock starts with finding a solid business that you can stick with over the long-haul. All of the companies listed above have lots of potential in VR, but none of them are betting on it entirely or even earning significant profits from it right now. Rather, each company is creating a long-term strategy right now so that they can benefit from VR later -- and investors should take a similar approach.