It's been a rough week for Deere (NYSE:DE) investors -- and this morning's earnings beat isn't helping.

So far, from Monday's close to Friday's opening, Deere stock has sunk 10%, and lost about $4 billion in market cap. This was despite an above-average earnings report this morning, in which Deere beat expectations for both sales and profits -- and raised guidance, to boot. Regardless, Wall Street has been busily downgrading the stock, both before and after the earnings came out. 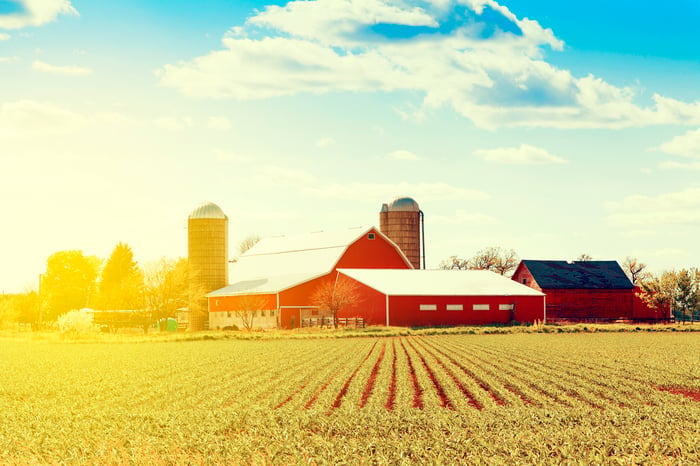 The bad news started arriving early -- three days before earnings in fact, when Merrill Lynch announced it was downgrading Deere stock to neutral and assigning a $145 price target to the stock. In a write-up on Tuesday, TheFly.com reported on Merrill's worries that "high horse power tractor demand fell 22% in July and Brazilian combine demand fell 27%." Absent "better grain fundamentals" in late 2018 into 2019, the analyst is worried that Deere's sales revival could short-circuit.

Although Deere has been beating earnings lately (in each of the past four quarters, in fact), the size of the beats has been shrinking, and Merrill warned that in its view, "outperformance relative to investor expectations may begin to subside."

Which is pretty much how things played out. After beating earnings expectations by 65% in its July quarter, and by 125% in the October quarter, Deere's earnings beats in Q1 and Q2 of this fiscal year were by only 11% and 48%, respectively. Then came this morning.

Deere reported profits per diluted share of $1.97 for its fiscal third quarter 2017. These earnings were up 27% year over year, which is undeniably good. Problem is, Wall Street had already been expecting Deere to report $1.95 per share. So while Deere beat expectations, it earned only 1% more than Wall Street had already predicted it would earn.

Or as Merrill might put it: Its outperformance relative to investor expectations subsided almost to zero.

3. After earnings: What Baird is saying now

Which brings us to today, when we see investment banker R.W. Baird announcing yet another downgrade of Deere stock (also to neutral, with a lower price target of $130).

As reported by StreetInsider.com (requires subscription), Baird acknowledges that Deere had a fine third fiscal quarter. Sales were up 16% year over year, and profits up 27%, indicating strong operating leverage (Deere has high fixed costs, such that revenue just insufficient to cover its costs will produce a loss, while revenue in excess of its costs yields profits that grow disproportionately as revenue grows). Baird also acknowledged that Deere raised guidance for the rest of the year, indicating that business is improving.

Equipment sales are expected to be up 24% year over year in Q4 2017, helping Deere to book a 10% gain in equipment revenue for the year, and an overall sales gain of 11%. Thus, Deere seems to be predicting its sales this year should be in the neighborhood of $29.5 billion -- far more than the $25.5 billion in sales that Wall Street is still expecting.

Deere furthermore predicted that its net income for the year will be about $2.075 billion, which divided among the company's 319.86 million shares outstanding should work out to $6.49 per share -- again superior to the $6.42 per share projected by Wall Street analysts.

So how are we to make sense of this? Deere beat on earnings last quarter, and beat even more soundly on sales. It benefits from strong operating leverage, such that big sales should yield even bigger profits -- and indeed, Deere's guidance for the final quarter of this year appears to foreshadow another big sales beat in Q4 (and a smaller beat on earnings).

This, though, I fear, is precisely the problem: Deere's sales are soaring, and its profits are growing. But Wall Street was already expecting this. Deere is promising 35% earnings growth for this full year, but because Wall Street was already looking for earnings to grow 33.5%, the analysts are becoming harder to impress -- and a 1.5% beat on earnings may not be big enough "relative to investor expectations" to make investors remain willing to pay more than 20 times earnings for what is, after all, a cyclical stock.

With worries about weakening tractor and combine demand looming, and "farm fundamentals remain[ing] weak" (as Baird laments), Deere is going to have to do even better in fiscal 2018 if it wants to turn these analyst downgrades into analyst upgrades again.