Interest rates are on the rise, but in historical terms, they are still near record lows. That's forcing investors to look to the stock market as a place to generate yield. However, plenty of high-yield stocks are simply too risky to touch. What's an investor to do?

To help you solve this conundrum, we asked a team of investors each to share a high-yield stock that they think is a smart buy today. Here's why they picked General Motors (NYSE:GM), Alliance Resource Partners (NASDAQ:ARLP), and QTS Realty Trust (NYSE:QTS). 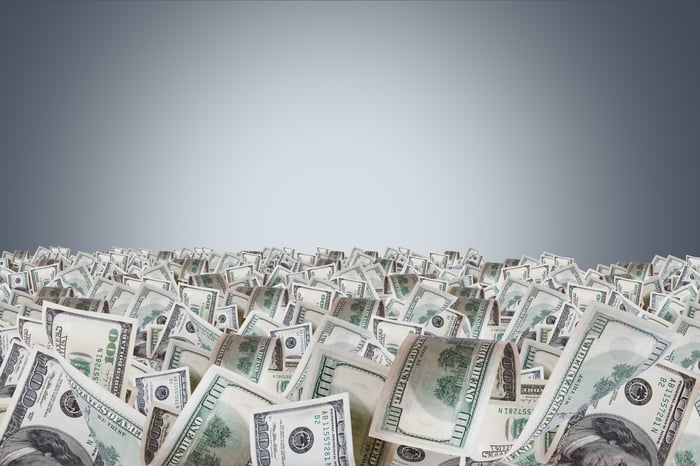 Not your father's GM

Daniel Miller (General Motors): It's no secret that new-vehicle sales in the U.S. market are currently peaking for this cycle. It's that reason that has Wall Street reluctant to buy into major automakers: Driving incremental revenue and profit gains will become increasingly difficult. However, smart investors who are looking for value stocks with a high-dividend yield should be all over General Motors.

Before we take a look at GM's dividend specifically, let's consider the factors that make it a smart income investment. General Motors has changed the way it operates, shifting its focus to generating better returns in the near term and exiting money pits like Europe. That's boosted the company's return on invested capital (ROIC) within a few short years: 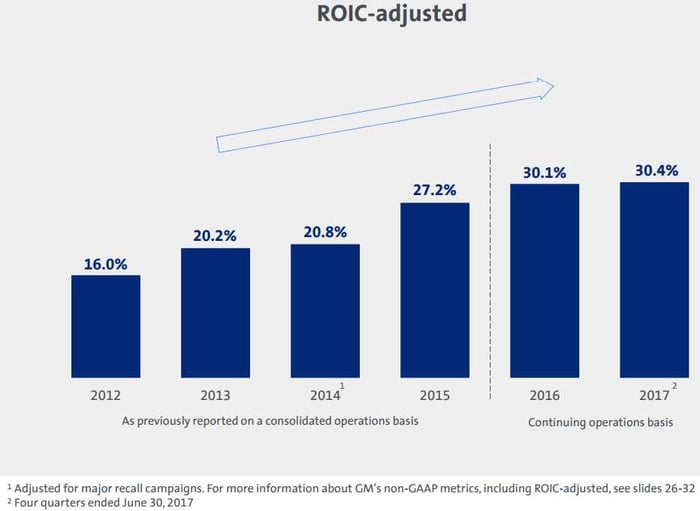 In addition to focusing on markets that can improve its top and bottom lines efficiently, GM has toned down its capital expenditures in recent years. GM spent about $9 billion in capital expenditures in 2016 and expects to drop that to $8 billion annually from 2017 to 2020, and then about $7 billion a year between 2021 and 2025. GM's increased focus on improving its ROIC and exiting less profitable markets has enabled it to return more value to shareholders. Consider that in 2014 GM returned $2.1 billion through share buybacks and dividends, and that amount will jump to an estimated $7 billion for the full year 2017.

Also worth considering for high-yield investors is that GM has prepared its business for a downturn. In fact, GM's done a better-than-expected job of generating cost efficiencies. Between 2015 and 2018 GM originally planned to find $5.5 billion in cost efficiencies that it would use to reinvest in engineering and technology, and it's met current objectives so easily it raised guidance to eventually generate $6.5 billion. Those cost efficiencies enable GM to better weather a potential downturn; management believes that if a 25% downturn took place, its adjusted EBIT (earnings before interest and taxes) during the first year would decline between $6 billion and $8 billion. While that's a far cry from its $12.8 billion adjusted EBIT in 2016, it's far from the devastation major automakers felt during the past recession.

Ultimately, General Motors is a healthy automaker with a cash-pile target of $18 billion, which will help the company survive downturns and continue to pay out its 4.36% dividend yield. That's one reason smart income investors are buying into the automaker as it sits at a (trailing-12-month) price-to-earnings ratio of less than 6.

A high-yield stock that smart investors can dig

On a macro scale, there's no sugarcoating that coal has lost some of its market share, in terms of electricity generation, to natural gas and renewables like wind and solar. Nevertheless, coal still accounts for nearly a third (30.4%) of all electricity generation in the United States as of 2016, and that's not going to disappear overnight. And coal can be shipped to overseas markets such as China or India, where electricity demands are exceptionally high, as a burgeoning middle class in both countries expands outward from major cities.

More specific to Alliance Resource Partners, there are two things that allow it to stand out from the pack. First, there's its focus on booking production far into the future. According to data from the company's latest quarter, it has 38 million tons of coal committed this year, along with 20.1 million tons for 2018, 11 million tons for 2019, and 6.9 million tons for 2020. These commitments reduce its chances of being exposed to wholesale coal prices, which also means very predictable revenue and cash flow, and few, if any, surprises.

Second, Alliance Resource Partners has a relatively pristine balance sheet compared to its peers. While some coal companies succumbed to their billions in debt and went bankrupt, Alliance Resource Partners has a debt-to-equity ratio below 50%, and net debt of around $521 million through the first half of 2017. While that may still sound like a lot, it's generated nearly the exact same amount ($524.1 million) in levered free cash flow over the trailing-12-month period. Translation: Financing and debt aren't a worry here.

Recently, the company also boosted its quarterly payout by 14% to $0.50. If it were to maintain this payout for a full year, investors would be taking home a nearly 11% dividend yield. Double-digit yields are usually unsustainable, but this limited partnership has the cash flow and business strategy to keep paying a superior yield to smart investors.

This REIT is built for growth

Brian Feroldi (QTS Realty Trust): The age of big data has arrived. The near-ubiquity of smartphones, tablets, and personal computers in our everyday lives is leading to an explosion in data creation. With cloud computing, the Internet of Things, and 4K video on the horizon, there is every reason to believe that this trend will continue.

However, all of this data creation and crazy growth in internet traffic is creating headaches for some companies. While it is important for them to be able to capture and manage all of their own data, it doesn't always make financial sense for them to invest in data centers of their own.

This is a market opportunity that data-center REITs (real estate investment trusts) such as QTS Realty Trust are trying to fill. QTS owns and operates 25 data centers that are strategically spread throughout in the U.S., Europe, and Asia. QTS provides its customers access to world-class facilities without needing to spend a lot to build and maintain their own. Furthermore, QTS's industry expertise allows it to provide customers with levels of security and performance that they would struggle to achieve on their own. These factors have enabled the company to rapidly attract more than 1,000 customers.

With the data explosion showing no signs of slowing down, QTS should have no problems continuing to attract new customers. That's great news for investors, because the company still has ample room to expand its current footprint. Management estimates that it can double its capacity using just the properties that it already owns. This means that QTS should be able to grow its revenue and profits without having to invest a ton in new real estate.

Since 2010 the company's top line has grown at an annualized rate of 23%, while its operating funds from operations (OFFO) -- a REIT proxy for earnings -- have grown in excess of 103%. While these growth rates will certainly slow in the years ahead, QTS still has plenty of tailwinds working in its favor that should enable double-digit growth. Add in a dividend yield of 2.8% -- which only consumes about 57% of expected 2017 OFFO -- and QTS is a stock that should appeal to growth and income investors alike.