It turns out that GM's CFO has a detailed answer -- and the news isn't as bad as you might think.

What happens to companies like General Motors (GM -4.37%) and Ford Motor Company (F -2.86%) when the economy goes south?

Given that the U.S. new-car sales cycle is probably past its peak, it's a question that investors should be asking. New-car sales are very sensitive to economic cycles. And because of the high fixed costs of auto manufacturing, even moderate declines in the level of new-car sales can have a dramatic impact on an automaker's profitability.

There are always buyers who need vehicles no matter how bad the economy gets, of course. Even during the worst of the 2008-2009 economic crisis, people were buying vehicles -- but at a much slower pace than they had been a year earlier: 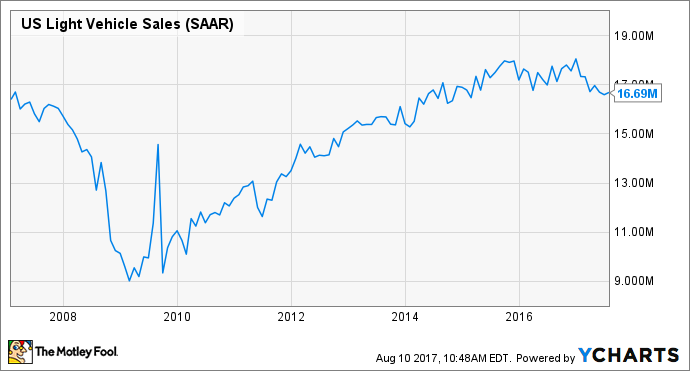 It makes sense that a lot of people (and businesses) would tend to postpone new-vehicle purchases during periods of economic uncertainty. And it's something that auto investors worry about, as historically many automakers have swung to losses during recessions.

But at least for some automakers, things might be different next time around. In a presentation to investors and analysts earlier this week, GM's chief financial officer, Chuck Stevens, gave an overview of how GM's finances would be affected by a 25% downturn in new-car sales in the United States. As you'll see, the impact on GM's profits would be dramatic -- but unlike some past downturns, it would be far from catastrophic. 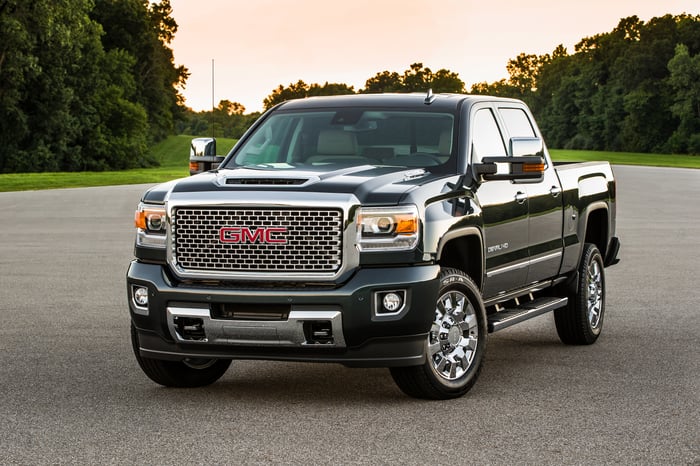 In a recession, buyers are likely to choose more lower-priced car models and fewer higher-end truck and SUV models. That will have an impact on GM's profit margin, its CFO said. Image source: General Motors.

How GM would perform through a moderate recession

Stevens began by noting that GM's "breakeven point," expressed in terms of the paces of U.S. auto sales, is now at a seasonally adjusted annualized rate of between 10 million and 11 million. As you can see from the chart above, the SAAR fell below 10 million for several months in late 2008 and 2009. But that was an exceptionally severe downturn, one that threw old GM into bankruptcy court.

GM, of course, has drastically overhauled its financial structure since then. Stevens emphasized that the company is well-prepared for the next downturn, with the ability to cut back its production quickly, a cash reserve of around $18 billion, and a big line of credit available should things get dire:

We have a much more flexible workforce here in the U.S. compared to the previous cycles, which will enable us to react much more aggressively and quickly to market dynamics. I already talked about our [commitment to maintain at least $18 billion in cash on hand]. That's to ensure that we can continue to invest through the cycle. We've taken these actions to ensure that we can outperform through the cycle and deliver better-than-peer results. And we believe we're positioned to do that.

Stevens said that after looking at the last six or seven U.S. downturns, his team determined that a 25% drop in the SAAR was a likely scenario. What would such a downturn -- a 25% dip in the annualized pace of auto sales from the current level, around 17 million --- mean for GM's finances?

Stevens said that the effects would include reductions in dealer inventories, a consumer shift away from higher-priced trucks and SUVs to lower-priced cars, and some pressure on GM's pricing. GM would offset those impacts to some extent by ratcheting down expenses that aren't related to future-product development, like manufacturing and marketing.

When it's all taken into account, GM's full-year pre-tax profit would likely dip by $6 billion to $8 billion in the first year of a downturn, Stevens said: 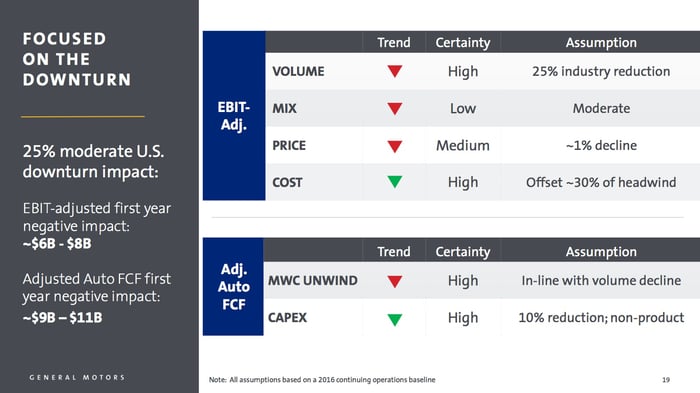 Given that GM earned $12.8 billion on an EBIT-adjusted basis in 2016 (minus the drag of its now-sold European operation), Stevens concluded that GM would continue to be solidly profitable during that downturn, albeit at a much lower level.

But GM's free cash flow would take a hit, Stevens said, and that would require it to draw on its cash reserve (emphasis added):

Versus [GM's current cash flow] run rate, we would expect the impact to be about $9 billion to $11 billion. So net-net, in the first year of downturn, we'd expect to burn about $5 billion, roughly, of free cash flow. Obviously, that risk is factored into our $18 billion target cash [reserve] to ensure that we can continue to invest through the downturn and maintain our current dividend.

Stevens has emphasized in the past that GM's dividend will remain a priority -- and will continue to get paid -- through a downturn, as long as GM hasn't exhausted its cash reserve.

Some comfort for GM (and Ford) investors in this example

Obviously, this is a hypothetical example. GM's performance during the next downturn won't follow this template exactly. Still, there's some comfort for GM investors here. (And to some extent, for Ford investors as well. This isn't Ford's model, but Ford has made similar changes to its business, has a similar cost basis and breakeven point, and maintains an even larger cash reserve than GM's hefty hoard.)

In this scenario, at least, GM would continue to post profits, would continue to pay its dividend, and would be comfortably able to continue new-product development so as to be in a competitive position with fresh new models when sales start to recover. But its profits would shrink, and its share price would probably shrink as well.

A downturn isn't likely to be an existential crisis for GM -- but it might be a good dollar-cost-averaging opportunity for its investors, particularly for those who reinvest dividends.