Please ensure Javascript is enabled for purposes of website accessibility
Log In Help Join The Motley Fool
Free Article Join Over 1 Million Premium Members And Get More In-Depth Stock Guidance and Research
By Scott Levine - Aug 19, 2017 at 10:31AM

Searching for a stock to invest in with an attractive yield? These companies may be able to wet your whistle.

When investors look to buy dividend-paying stocks -- especially those with high yields -- utilities are often one of the first considerations. Since utilities operate in regulated markets, they are afforded great clarity into their financial futures, which, in part, enables them to return ample cash to shareholders.

But with so many utility stocks offering dividends, the choices can be overwhelming. Gas and electric utilities certainly deserve attention, but that doesn't mean water utilities deserve short shrift. After all, demand for water isn't going to ebb anytime soon. Let's dive in and examine the best opportunities for investors. 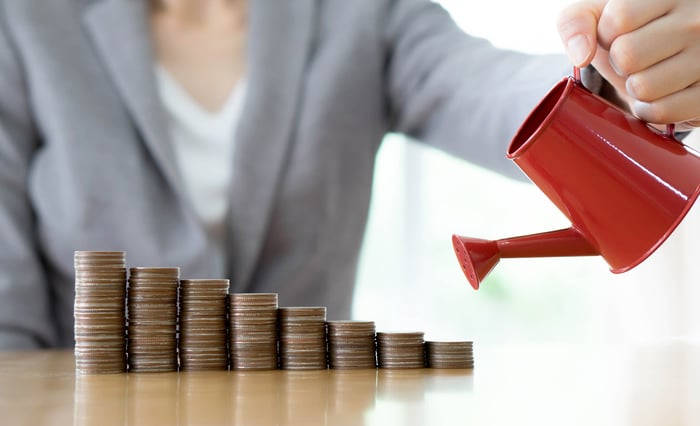 Providing regulated and market-based water and wastewater services to approximately 15 million customers in 47 states and Ontario, Canada, American Water Works (AWK 0.53%) is the largest publicly traded water utility by market cap. Celebrating 130 years in business this year, the company distinguishes itself as being the only water utility to be included in the S&P 500, Dow Jones Utility Index. Unlike many smaller water utilities, American Water Works mitigates the significant risk associated with adverse weather phenomenon thanks to its geographically diverse footprint.

Management foresees steady growth in the company's future. According to a recent investor presentation, American Water Works will achieve a 7% to 10% compound annual growth rate (CAGR) in earnings per share (EPS) from the $2.64 that it reported in fiscal 2015 through 2021. Adding to the stock's appeal is the fact that management intends to anchor the company's dividend growth to the top end of the EPS growth.

Far from wet behind the ears

In business since 1866, Aqua America provides water and wastewater services to 3 million customers located across eight states. The company also has a presence in the energy industry since forming a joint venture in 2012 with Penn Virginia Resource Partners, L.P.

Although Aqua America's revenue growth over the past three years seems unimpressive, investors can rest assured that their investments will be put to good use. The company reported a 13.10% return on equity (ROE) in fiscal 2016. No other company in this peer group, however, reported a ROE above 11%. 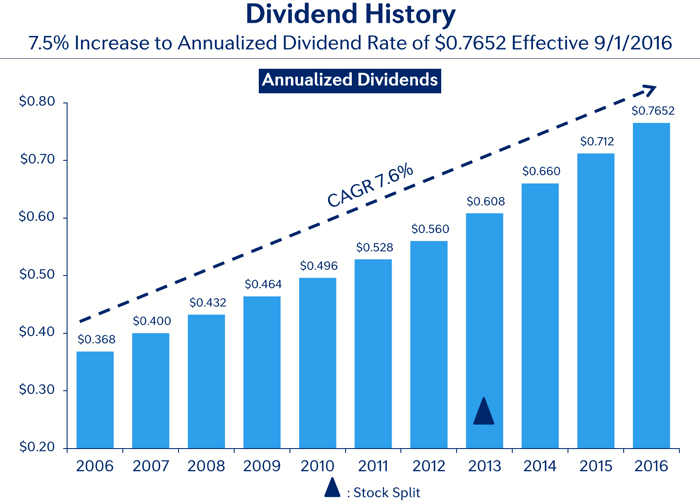 Having completed 84 acquisitions over the past five years -- and with four pending in 2017 -- Aqua America has a clear record of executing its growth-through-acquisition strategy -- a strategy that, presumably, will continue to be executed in the future and provide the means to continue putting cash in shareholders' pockets.

The top player in the First State

The oldest and largest water utility in Delaware, Artesian Resources also provides water and wastewater services in Maryland and Pennsylvania. Although it only has about 85,000 metered customers, Artesian Resources has grown revenue about 11% over the past five years. More impressive, though, is its success in improving its cash flow. According to Morningstar, over the same period, the company has increased its cash from operations a whopping 30%.

The company currently offers investors the highest dividend yield among businesses in this peer group. Investors must also recognize, however, that Artesian Resources also has the highest payout ratio among these peers: 67.7%. This, in addition to the limited geographic diversity of its customer base, suggests that this company is better suited for investors with a higher tolerance for risk. 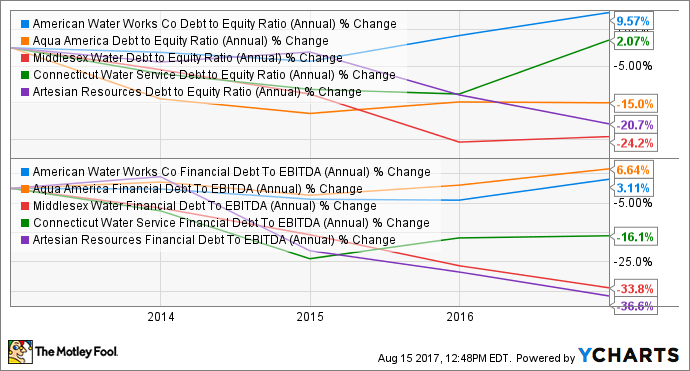 Despite this higher risk, interested investors should be encouraged by the company's success -- superior to its peers -- in improving its financial health over the past five years, illustrated by the reduction in its debt-to-equity and debt-to-earnings before interest, taxes, depreciation, and amortization (EBITDA) ratios.

A rising tide of customers

The largest New England-based publicly traded water utility, Connecticut Water serves about 129,000 customers in Connecticut and Maine. But what the company lacks in the size of its customer base, it makes up for in growing its customer base. Over the past five years, Connecticut Water has added about 44,000 customers, which equates to an increase of about 44%. This, in part, has contributed to the company's significant growth to its bottom line. 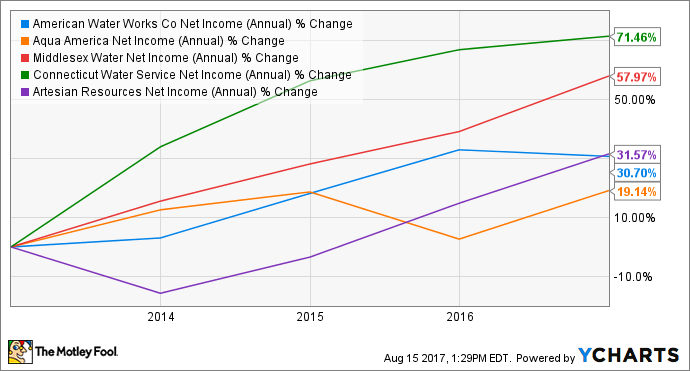 According to management, there's plenty of opportunity for the company to grow further, for there are over 800 separate water systems and over 300 wastewater operations in Connecticut and Maine, according to a recent investor presentation.

Demonstrating a lengthy commitment to rewarding shareholders, Connecticut Water has increased its dividend payments for 48 consecutive years, and it has paid a dividend -- without interruption or reduction -- for 243 consecutive quarters.

Grounded in the Garden State

With roots in providing water services since its founding in New Jersey in 1897, Middlesex Water Company maintains operations in Delaware and Pennsylvania, in addition to New Jersey. The company has paid a cash dividend since 1912, and for the past 44 consecutive years, it has increased its annual dividend rate.

Like Artesian Resources and Connecticut Water, Middlesex Water is a regional player -- which means it bears more risk than its larger peers American Water Works and Aqua America. Over the past few years, though, Middlesex has greatly improved its financials, suggesting it's well positioned to sustain its dividend. Assuming a more conservative approach to returning cash to shareholders, Middlesex Water has reduced its payout ratio from 83% in fiscal 2012 to 59% in fiscal 2016. 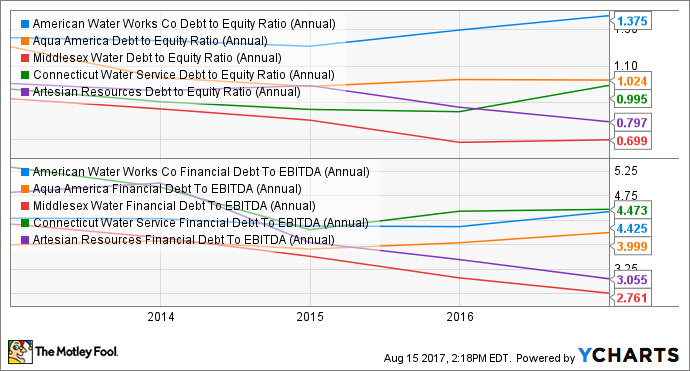 Further proving its conservative approach, the company has consistently demonstrated less-reliance on leverage than many of its peers.