The stock market has made a lot of people rich since 2009, as several major benchmarks have tripled or even quadrupled during the past eight years. Yet for individual stocks, gains can come a lot more quickly, and a few particularly successful stocks have seen gains of that magnitude in less than eight months. In particular, Everi Holdings (NYSE:EVRI), Kemet (NYSE:KEM), and Sangamo Therapeutics (NASDAQ:SGMO) have all tripled since the beginning of 2017, and investors looking at these stocks for the first time want to know if there's still any profit left in them. Below, you'll learn more about these three companies and whether they can keep gaining ground. 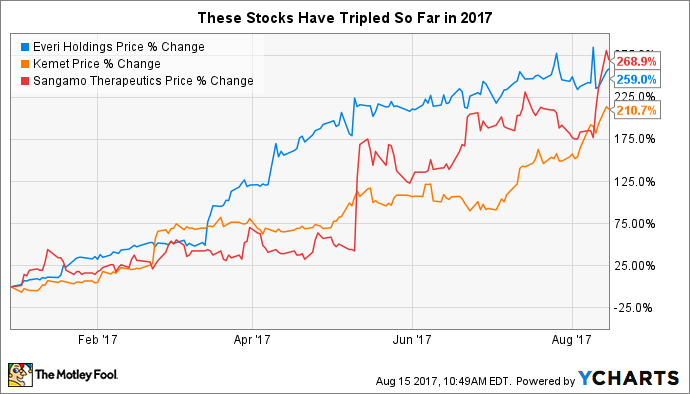 Everi gets dealt a winning hand

Everi Holdings isn't a household name, but it plays a vital role in the casino gaming sector. The company works to bring advanced security for financial transactions on casino floors, where effective strategies are necessary to avoid the risk of fraud, make it easier for customers to get access to funds, and comply with regulatory requirements that casino resorts must follow. Everi also has a division that offers slot machines and other cabinet games to casinos.

Two primary catalysts have pushed Everi stock higher this year. First, the company said in April that it expected strong quarterly results and that it was working to reduce its interest expense by refinancing its debt, which is important to its long-term success. Then earlier this month, Everi reported strong gains in revenue and operating income, riding high on the success of its payment systems and also announcing new contracts to boost its relationship with a key customer in Oklahoma. A setback could hit the highly leveraged company hard, but if things keep going well for Everi, the stock should be able to keep climbing in response.

Making what's inside the devices you love

Kemet isn't known for the products it makes, but its passive electronic components go into a wide variety of electronic devices. As the electronics industry keeps making progress, demand for Kemet's capacitors, relays, and sensors keeps rising, and that has been a positive for the company over time.

Kemet's most recent uptick has come from a couple of key events. In February, Kemet announced that it would acquire the NEC TOKIN business, and the deal subsequently closed in April. Under its terms, Kemet paid $149 million for the business, and Kemet CEO Per Loof noted that the deal should allow Kemet to offer a wider array of products and services to its electronics customers going forward. So far, that vision appears to be going well, with jumps in revenue already materializing. The company is optimistic that synergy gains will keep emerging and that Kemet will play an ever-larger role in the boom in technology overall.

Finally, Sangamo Therapeutics is a small player in the biotechnology space, with its genome-editing technology helping it develop interesting new treatments. Among the company's key candidate treatments is SB-525, a gene therapy designed to help patients suffering from hemophilia A. Sangamo received a key designation for SB-525 as an orphan drug during the first quarter, and that pushed the stock sharply higher when the company made the announcement. In addition, Sangamo said that it would work alongside Pfizer (NYSE:PFE) on developing the treatment, including an upfront payment of $70 million and up to $475 million in future potential milestone payments for SB-525 as well as other payments for additional gene therapies.

Since then, further gains have ensued. Orphan status from European regulators added to excitement about the stock, and a successful stock offering from Sangamo avoided the usual dilution that such cash-raising moves generally cause. With interest in gene therapies on the rise, Sangamo is in the enviable position of having an advanced pipeline to demonstrate proof of concept for commercial viability from the industry going forward.

It's rare for a stock to triple in less than a year, but these three stocks all have the growth prospects to justify their gains so far. To keep up the pace, Sangamo, Kemet, and Everi will all have to remain vigilant and take maximum advantage of their business opportunities in order to drive the results that will justify their high valuations.