Pfizer, Inc. (NYSE:PFE) scored another cancer drug victory this past week when the FDA green-lighted Besponsa, a drug that battles back against a rare and deadly type of leukemia. The approval adds yet another arrow to Pfizer's quiver of cancer treatments, and it could boost the company's sales by $1 billion, or more.

After failing a trial evaluating its use in a subset of non-Hodgkin lymphoma patients back in 2013, Besponsa was rescued from the risk of ending up in the dustbin when it delivered a decisive knock-out blow to cancer in patients diagnosed with relapsing or refractory B-cell precursor acute lymphoblastic leukemia, or ALL. 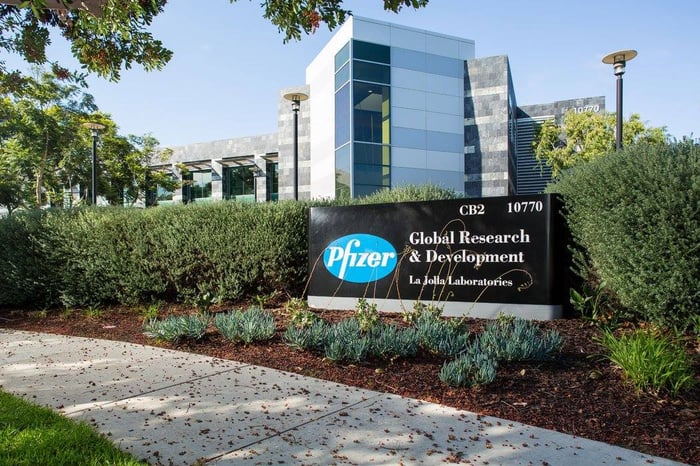 Specifically, 35.8% of patients receiving it experienced complete remission for a median eight months, which was significantly better than the 17.4% who experienced a complete remission for a median 4.9 months in the placebo arm of its study. Nearly 90% of Besponsa patients achieved minimal residual disease, which also handily outperformed the 31.6% with MRD in the placebo group.

ALL patients' best chance for recovery is stem cell transplant, and Besponsa appears to do better at getting patients to a point where that's possible, too. In its study, 48% of Besponsa patients proceeded to stem cell transplantation. The same can only be said for 22% of chemotherapy patients.

Besponsa's performance is particularly impressive because patients who fail to respond to initial therapy, or who see their disease return following it, are tough-to-treat, and sadly, they have a poor prognosis.

Generally, ALL is an aggressive cancer, and it's treated with intensive chemotherapy. About 6,000 patients will be diagnosed in the U.S. this year with ALL, about 40% of whom are adults. Of these adults, approximately 10% to 20% will fail to respond to chemotherapy, and about 50% of patients who do respond, will end up in relapse. In cases where the patient has relapsed, the median survival is less than six months.

Those estimates might be aggressive given the indication's small patient pool, but even if Besponsa delivers sales in the hundreds of millions annually, it will still be a nice win for the big-cap pharma giant. Pfizer's tirelessly been working to establish itself as a leading cancer company following the loss of patent protection on its $14-billion per year cholesterol drug, Lipitor, and Besponsa represents yet another success in its quest.

Pfizer already markets the fast-growing breast cancer drug Ibrance. It sells the kidney cancer drug Sutent and the lung cancer drug Xalkori. It bulked up its cancer lineup with its $14 billion acquisition of Medivation last year, which brought with it the multibillion dollar prostate cancer drug Xtandi. And earlier this year, it notched approval for its PD-1 targeting immuno-oncology drug Bavencio in bladder cancer. Altogether, Pfizer's cancer drug sales in the second quarter were $1.59 billion, up 44% year over year.

Besponsa isn't going to be the company's best-selling cancer drug, but its sales should still contribute to Pfizer regaining its growth momentum. This year, Pfizer expects sales of between $52 billion to $54 billion, and while that's still below peak revenue during Lipitor's heyday, it still represents a transition back to year-over-year revenue increases.