Over the past year and a half, the S&P 500 has risen by more than 26%, and the financial sector has been one of the best performers during this rally, up 44% during that time. Despite the fact that many bank stocks have performed incredibly well during that time, there are some that still look like excellent long-term investments at their current prices. Here are two in particular that I have my eye on right now.

Data source: TD Ameritrade. Stock prices and dividend yields are current as of 8/18/2017.

By now, you've probably heard about Wells Fargo's (NYSE:WFC) infamous fake accounts scandal, which resulted in $185 million in civil penalties for the bank. To make matters worse, the bank recently revealed that the extent of the scandal may be even worse than originally thought, and it's also caught up in an auto-lending scandal in which 570,000 auto loan customers were unknowingly charged for auto insurance. 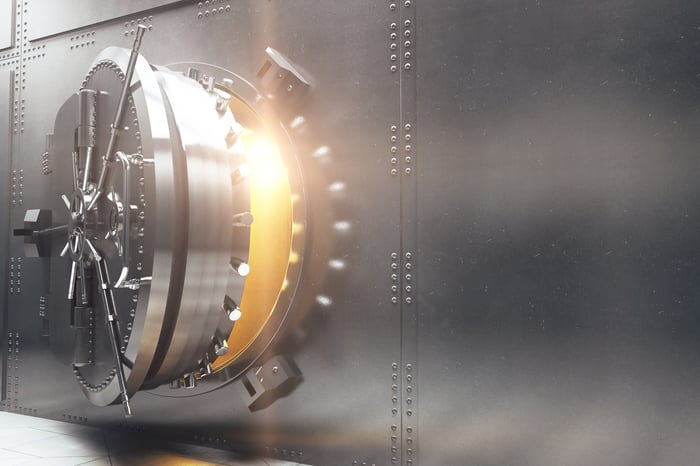 While Wells Fargo's behavior was indeed awful, and the bank certainly deserves to be held accountable for its past actions, this could be a good opportunity for long-term investors to add Wells Fargo to their portfolios. The bank remains one of the most profitable big banks in the U.S. with ROA and ROE metrics that significantly exceed the industry benchmarks. Plus, the bank has committed to reducing expenses by $4 billion annually by the end of 2019 by trimming its branch network by 450 and focusing on growing its online and mobile banking platforms.

In the wake of the scandal, Wells Fargo changed its leadership, discontinued its questionable sales culture, and most recently, the bank has made some major changes in its board of directors in a further effort to change its culture. In a nutshell, Wells Fargo has taken steps to put its wrongdoing behind it. While it will likely take some time before the issues (and associated legal expenses) are completely in the past, these issues are temporary ones.

The bank's management seems to believe the stock is a good value right now as well, as the bank's approved capital plan calls for dramatically increasing its buyback program to $11.5 billion over the next year (for reference, Wells Fargo bought back $5 billion in stock during 2016).

With a 5.6% dividend yield based on its current share price, New York Community Bancorp (NYSE:NYCB) is the highest-yielding U.S. big bank by a wide margin.

New York Community Bancorp is a niche lender, focusing on rent-controlled and rent-stabilized apartment buildings in New York City. Because of their below-market rental rates, these properties tend to maintain their tenants no matter what the economy is doing, and therefore, the loans backed by these properties have extraordinarily low default rates. As a result, New York Community Bancorp has historically been a highly efficient bank with superior asset quality. So, why is the stock down 23% while the financial sector is up 44% since the February 2016 lows?

The roots of the underperformance began in 2015, when New York Community Bancorp agreed to merge with Astoria Financial, which would catapult the bank's assets over the critical $50 billion regulatory level, adding to its compliance expenses. However, the added size of the merger, and increased earnings potential that came with it, was expected to help the bank absorb the costs. However, the banks called off the merger at the end of 2016, after New York Community Bancorp had taken steps to prepare for the increased regulatory requirements.

As a result, the bank isn't quite as efficient as it previously was, nor does it still have a reputation as a rock-solid dividend stock, as it cut its dividend in anticipation of the merger, as my colleague John Maxfield recently discussed. Worse yet, there seems to be a general distrust of the bank's management among investors in the wake of the merger cancellation.

In full disclosure, I've owned New York Community Bancorp in my own portfolio for about a year now, and I thought shares would have rebounded by now. Although the bank's stock performance has been disappointing, the long-term outlook remains positive, and I may add to my position if the stock price stays low.