Apple (NASDAQ:AAPL) will invest about $1 billion in original video content in 2018, according to The Wall Street Journal. That move is aimed at competing with Netflix (NASDAQ:NFLX), Amazon (NASDAQ:AMZN), and Hulu, which have invested heavily in original content over the past few years.

Producing exclusive video content might make the Apple TV -- which lags behind Roku, Chromecast, and Fire TV in the U.S. streaming device market -- more appealing to consumers. It would also complement Apple Music in the streaming media market, and potentially boost its services revenue.

But as seen in the following chart, $1 billion isn't that much compared to the amount Netflix spent on its four priciest shows alone. Moreover, all of these shows -- except The Crown -- have already been canceled. 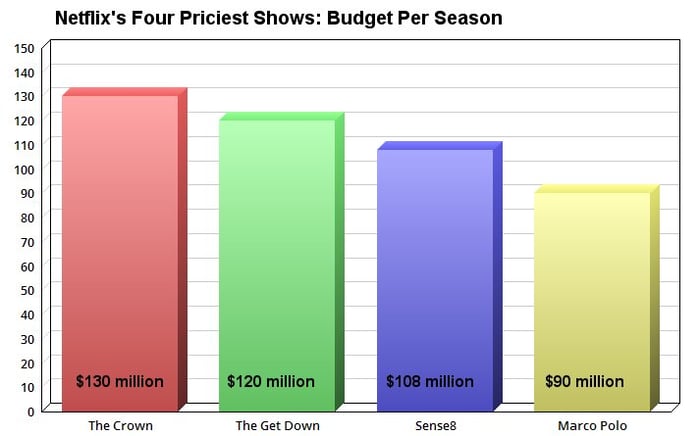 As TV show budgets continue to rise, Apple might need to boost that spending if it's serious about challenging Netflix and Amazon. It would also need to make its video service a cross-platform one -- as it did with Apple Music -- to reach more viewers. But even then, Apple could struggle to carve out a defensible niche.