In his 1989 book The Great Good Place, author Ray Oldenburg coined a term for the type of hangout that serves as an important social gathering point in our society: "the third place." As opposed to the first two places of home and work, in the third place, we can mix freely and unhurriedly, exchange ideas, and generally become revitalized in each other's company. In his widely read book, Oldenburg cites the neighborhood coffee house as a prime example of the third place.

It's an idea that's resonated with Starbucks Corporation (NASDAQ:SBUX) founder and current Executive Chairman Howard Schultz. Schultz has long argued that Starbucks wants to be the primary third place for much of the U.S. and, indeed, the world.

Not so with Dunkin' Brands Group (NASDAQ:DNKN). For several quarters, Dunkin' has worked on a "multiyear plan to transform Dunkin' Donuts U.S. into a beverage-led, On-The-Go brand," to quote what has become almost a rote phrase issuing from the executive suite. At present, as domestic Dunkin' Donuts stores go, so goes the company, as 76% of Dunkin' Brands' revenue is still generated from U.S.-based Dunkin' restaurants.

Dunkin' Brands Group has sufficient data that backs up the assertion that it can prosper catering to "on-the-go" customers. Last year, the company invested in a consumer research deep dive and learned that patrons indeed identify Dunkin' Donuts as a sort of quick stopover point for refreshment.

In a push to build on this perception, management is slowing 2017 store development as it prototypes new store formats that will hit the market later this year. Dunkin' Donuts U.S. franchisees are now expected to open between 330 and 350 restaurants net of closures in 2017 versus an earlier expectation of 385 net new locations. The company's more streamlined store designs also will undoubtedly reflect an important trend: For full-year 2017, 85% of newly opened Dunkin' Donuts locations are expected to sport a drive-through, as opposed to just 70% five years ago. 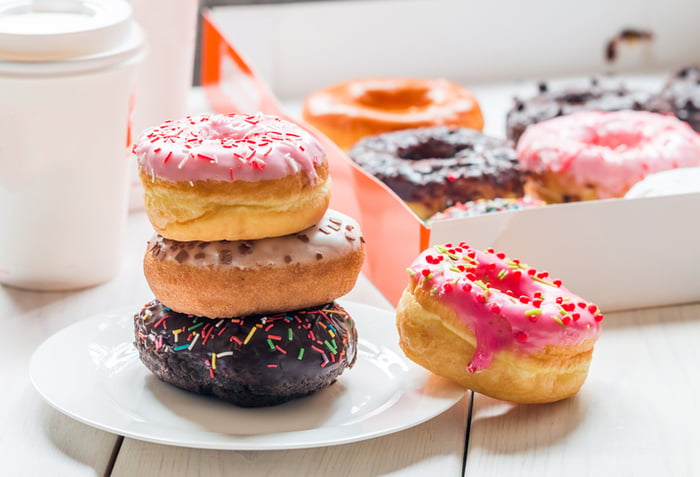 Since on-the-go transactions are often simply beverage orders with attractive margins, the company has focused intensely on its beverage business as of late. Dunkin' Donuts is supplementing its strength in drip coffee with the recent launch of its "Frozen Dunkin' Coffee" platform. It's also launched a line of ready-to-drink bottled coffee this year through its joint venture with The Coca-Cola Company.

In fact, the beverage-led ideal is so entrenched in management's mind that the company is experimenting with a name change that drops the "Donuts" altogether from its trademark namesake branding. An upcoming test in Pasadena, California is expected to expand to multiple locations.

While shearing off the word "donuts" certainly speaks to being "beverage led," and perhaps also connotes a speedier operation, in substance, the company isn't diminishing its donuts focus anytime soon. David Hoffman, president of the U.S. and Canadian Dunkin' Donuts business, recently discussed the importance of donuts in the company's most recent earnings conference call:

"...we'll continue to focus on donuts. This is a category in which we have significant equity as the number 1 retailer nationally. And given our scale, we have the ability to offer fun and innovative products at a great value as compared to the boutique players in the space... And you will continue to see us double down on our donut mojo in the back half of 2017."

Now, my Foolish colleagues Dan Kline and Rich Duprey have written thoughtful articles on why the proposed name change doesn't work from either a branding or strategic angle. And relative to the company's existing legacy business, their points are well taken.

But in the grand scheme of Dunkin's quick-service destiny, it may not really matter what the company chooses to call itself. That's because the true long-term identity of Dunkin' Donuts is a blank slate. Take a look below at the most current version of an image management loves to share with investors: a map of Dunkin' Donuts' U.S. footprint. 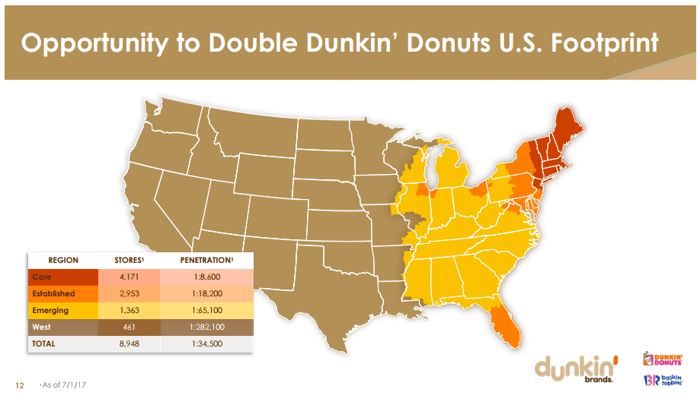 The numbers in the inset square are small and may be hard to read. The most important statistic details store penetration in the chocolate-colored "West" region. Here, the company has just one location for every 282,100 people. Compare this to the penetration of one store for every 8,600 people in Dunkin's' core market of six northeastern states. The west represents vast future opportunity.

Thus, aside from the novelty factor, for most of the country, the brand doesn't have a strong association with coffee or donuts. There are only 461 stores in this wide swath of the map, which represents two-thirds of the country's geography and only 5% of total store count. This makes the west an ideal place to iterate and experiment with brand identity.

Place is just a state of mind

Dunkin' is catering to customers' haste and busy lifestyles with minimalism and speed. It's successfully introduced a simplified menu in 300 stores so far this year, and will widen the test to an additional 700 restaurants by October. Per Hoffman, the benefits of the streamlined menu for franchisees include faster customer throughput and easier order execution.

On-the-go ambitions notwithstanding, Dunkin' Brands ultimately wants to be present in the first and second places. Packaged coffee, K-Cups, and the bottled beverages mentioned above are all aimed at home and workplace consumption. But Dunkin's' particular insight into customer behavior leads it to devalue the third place and to see Starbucks' embrace of the coffee-house concept as dubious.

The epiphany is that, while Americans would love to spend more time at the third place, in reality, we seem to have little true leisure time to do so. We're a society in motion, despite our best attempts to slow down and live with more balance. And whether we associate the organization with donuts or beverages isn't of prime importance -- Dunkin' just wants to be top of mind as we keep moving.