Comcast (NASDAQ:CMCSA) has proven incredibly resilient in its core cable and internet business. The company has been able to grow not only its broadband business, but shockingly also its pay-television business at a time when most of its rivals have been losing customers due to cord cutting.

On the cable side, Comcast did lose 33,000 subscribers in Q2, but it made up for that by adding 41,000 in Q1, according to data compiled by Leichtman Research Group (LRG). To put that number into perspective, during the same period Charter Communications (NASDAQ:CHTR), arguably Comcast's biggest rival, lost 165,000 cable customers.

Of course, cable is only one piece of a very large pie for Comcast. Overall, however, the company has its various business units pointed in the right direction. 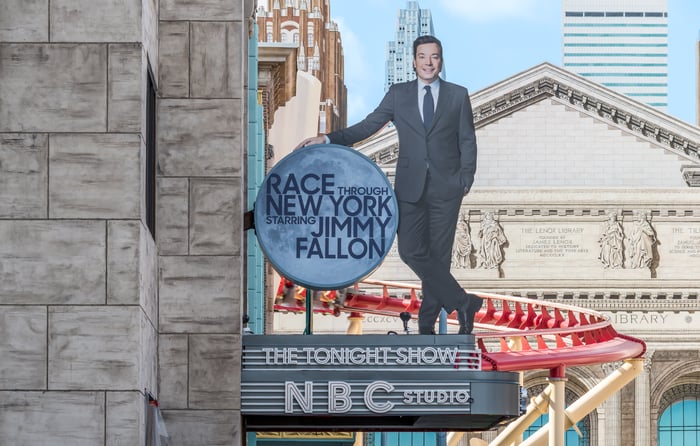 Comcast has done a good job using its intellectual property in a variety of ways. Image source: Comcast.

What are Comcast's weaknesses?

It's very clear that consumers are beginning to reconsider their relationship with their cable providers on an increasing level. In some cases that means dropping cable, or cutting the cord, and that does present a risk for Comcast.

It's not simply that the company would lose subscription revenue, it's that in theory its cable networks and NBC would be damaged as well. So far, however that has not happened. Through the six months of fiscal 2017, revenue has grown by 14.2% at Comcast's cable networks and 8.8% at NBC.

Overall, the NBCUniversal group, which includes the company's film division, cable networks, NBC, and its theme parks, saw revenue increase by 16% through the first two quarters. That does not change that cord cutting could eventually harm the company, but so far it hasn't.

What are Comcast's strengths?

Cord cutting requires a strong internet connection and that has sent Comcast's broadband business steadily higher. The company added 430,000 broadband customers in Q1 and 175,000 in Q2, according to LRG. That's roughly similar to the numbers Charter posted and those two companies sucked up nearly all the growth posted in the segment for the first half of the year.

Aside from its strength in internet, Comcast's strongest asset may be its intellectual property (IP). While the company sits behind Walt Disney in that area, it still has a very strong array of film properties that drive theatrical revenue, while also supporting its theme parks, and broadcast networks.

Films including The Fast & the Furious, Despicable Me, Jurassic World, and the animated hits it obtained when it acquired DreamWorks give it stability at the box office. In addition, the company has done a good job extending some of its animated franchises to television, and even bringing a ride based on Jimmy Fallon's Tonight Show to Universal Studios Florida.

The company also has successful movie franchises that aren't quite blockbusters in its 50 Shades, Pitch Perfect, Insidious, and The Best Man series. Comcast is also trying to create a film universe based on its monster characters, but the fate of that remains uncertain after Tom Cruise's reboot of The Mummy failed to connect with consumers.

In addition to upcoming Fast & The Furious, Pitch Perfect, 50 Shades, and Jurassic World sequels, the company also has a number of animated sequels including How to Train Your Dragon 3, The Secret Life of Pets 2, and Dr. Seuss' The Grinch coming in 2018 and 2019. Those films join the 2018 Winter Olympics and and an upcoming Fast & The Furious ride in Orlando as near-term highlights for the company.

Comcast has exposure to the changing media habits of the American public, but its IP and broadband business gives it a powerful hedge against that. The company looks strong for years to come driven by its powerful film assets that it can use to attract customers to theaters, the small screen, and its theme parks.