Flooding investors with a variety of emotions, earnings season can often leave investors feeling excited, relieved, or confused -- and overwhelmed. And, in the case of a company missing analysts' estimates or coming up short of management's guidance, investors may even find themselves doubting their convictions, wondering if they should start to look for new opportunities.

Having recently released its second quarter earning, American Water Works (NYSE:AWK) may have left some investors frustrated -- even fearful. For one, the company reported sales of $844 million, which was below analysts' estimates of $863 million. The company also reported diluted earnings per share of $0.73, dropping from the $0.77 which it reported during the same period last year and falling short of the $0.80 which analysts had anticipated. Should investors consider jumping ship? Absolutely not. This is one water utility which finds itself in anything but deep water. 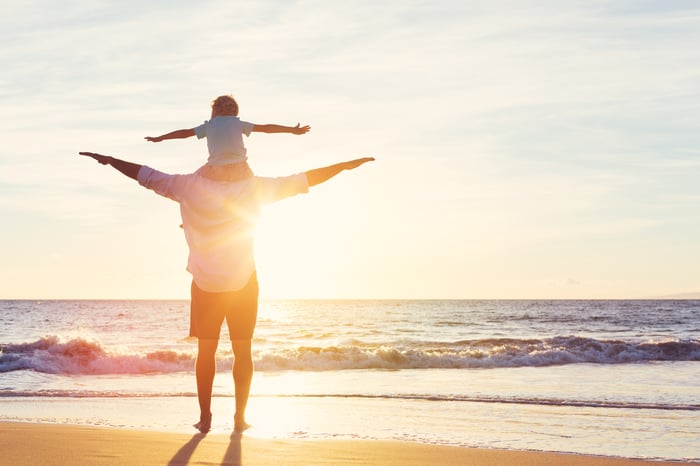 During the earnings presentation, management claimed that the year-over-year decline in earnings was not a surprise and does not indicate any missteps in the company's operations. According to management, favorable weather conditions and a contract settlement positively affected the company's EPS by $0.02 and $0.01, respectively, in Q2 2016; moreover, in the recently completed quarter, lower capital upgrades in the company's Military Services Group and a New York tax adjustment each adversely impacted EPS by $0.02.

Proving its confidence that the rest of the year will see smooth sailing, management --crediting several factors -- affirmed annual EPS guidance of $2.98 to $3.08 during its earnings presentation. For one thing, it anticipates growth from the regulated businesses segment in the second half of the year, stemming from the addition of about 34,000 customers from pending acquisitions. In the market-based businesses segment, management sees Keystone Clearwater contributing to earnings thanks to increased activity from a backlog of projects.

Expanding our perspective beyond the quarterly earnings and fiscal 2017 guidance, we find that there are plenty of other reasons why investors can sleep soundly. For example, the company is financially fit. In addition to growing its top line at a greater clip than its peers over the past five years, it has increased its operating cash flow at a superior rate. 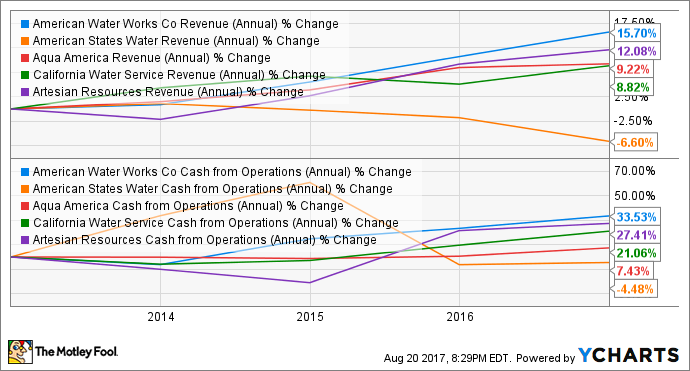 The most geographically diverse water utility, American Water Works is not susceptible to adverse local weather phenomena like some of its competitors. In fiscal 2016, for example, New Jersey and Pennsylvania -- the company's two largest regulated business markets -- accounted for 25% and 22%, respectively, of total operating revenue. Its closest competitor by market cap, Aqua America (NYSE:WTRG), on the other hand, reported that Pennsylvania accounted for 52% of operating revenue in fiscal 2016. American States Water (NYSE:AWR) illustrates the danger posed by a lack of geographical diversity most clearly: California, which suffered severely from a recent drought, is the only state in which it operates in the regulated market.

Besides the income and cash-flow statements, American Water Works' balance sheet is another source of reassurance. The company maintains investment-grade credit ratings of "A3" and "A" from Moody's and Standard & Poor's, respectively.

Oftentimes, it's the steady dividends that attract investors to utility stocks. And American Water Works, offering one of the best dividends among water stocks, is no different. Raising its payout by 22% over the past three years, management has demonstrated a clear commitment to returning cash to shareholders. But has this come at the expense of the company falling into a precarious position.? 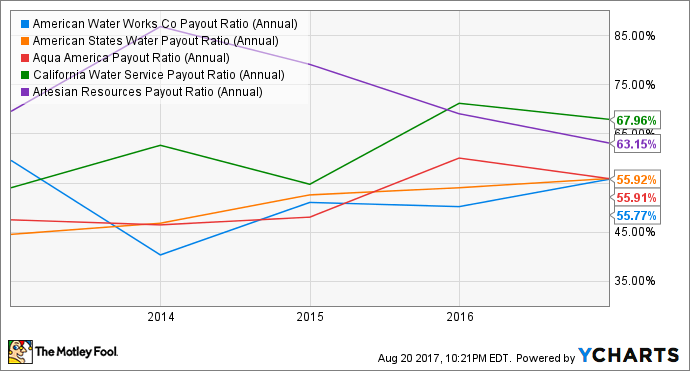 No, not at all. Compared to its peers, American Water Works has consistently maintained a lower payout ratio, suggesting that management is increasing the dividend in a circumspect manner. This bodes well for investors moving forward. In fact, management has provided insight into its dividend policy. In a recent investor presentation, management forecast a 7% to 10% EPS compound annual growth rate from the $2.64 that it reported in fiscal 2015 through 2021.

Moving forward, investors should monitor American Water Works' commitment to its growth-through-acquisition strategy; failure to pursue this strategy effectively may compromise the company's ability to achieve its EPS guidance through 2021. Growth, of course, shouldn't come at the expense of the company's financial health, so investors can also keep an eye on the company's credit rating while watching the payout ratio as the dividend rises.