For some, it's a lumpy mattress that causes tossing and turning through the night. Others, however, suffer from sleepless nights because of their portfolios.

There are a variety of reasons your holdings can keep you awake, but there's hope: Fortifying your portfolio with solid stocks can help ensure your drifting off to dreamland. So to help you avoid waking up foggy-headed in the morning, let's look to three companies: American Water Works (NYSE:AWK), NextEra Energy (NYSE:NEE), and Royal Gold (NASDAQ:RGLD). 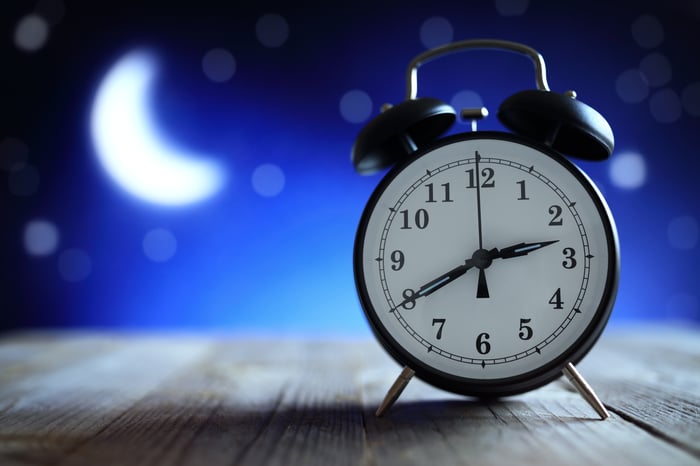 The largest publicly traded water utility stock, American Water Works, has a customer base of 15 million that spans 47 states, Washington D.C., and Ontario. Although it also operates in the market-based segment, it's the regulated businesses segment that's the company's bread and butter, accounting for 87% of revenue in fiscal 2016. Management expects it will continue to be at the core of the company's business for years to come -- an estimated 85% of revenue in fiscal 2021, according to a recent investor presentation. Dealing so heavily in the regulated markets affords the company great clarity into its financial future -- a future in which management sees smooth sailing.

For one, the company forecasts earnings per share to rise at a compound annual growth rate (CAGR) between 7% and 10% for fiscal 2015 through fiscal 2021. In conjunction with the bottom-line growth, management expects to raise its dividend while maintaining a conservative payout ratio between 50% and 60%. A commitment to returning cash to shareholders is something investors are already familiar with. Over the past 10 years, the company's dividend has risen about 108%.

Although management offers an auspicious outlook, skeptical investors may fear the company is drowning in debt. But the company's investment-grade credit ratings of "A3" and "A" from Moody's and Standard & Poor's, respectively, should help dispel those concerns.

A choice to get charged up about

NextEra Energy isn't only one of the largest electric power companies in North America; it's a global leader as well. According to its most recent 10-K, the company, including its subsidiaries, is "the largest generator of renewable energy from the wind and sun in the world based on 2016 MWh produced." In terms of both traditional and renewable energy sources, NextEra Energy has electricity generation facilities in 30 states, four Canadian provinces, and Spain.

Like American Water Works, investors need not fear being shocked when they turn to the company's balance sheet. NextEra Energy retains investment-grade ratings of "Baa1" from Moody's and "A-" from Standard & Poor's.

Turning from utilities, we find a gold stock that could provide investors with plenty of restful nights. Royal Gold is a royalty and streaming company that, at the end of 2016, had 38 producing properties. The company has growth on the horizon as well: 24 development-stage projects and 130 evaluation and exploration-stage properties.

Investing in gold may not seem like the cure for sleepless nights, but an investment in Royal Gold transcends the hope that the price of the yellow stuff will rise. As a royalty and streaming company, Royal Gold is not directly involved with the mining of the mineral, so it doesn't bear the burden of the substantial operating costs which the miners incur. Instead, it provides upfront payments to the miners. In return, it receives the rights to purchase the mined metal at a preset price or receive a percentage of mineral production. For example, following a payment of about $782 million before gold production commenced at the Mount Milligan project, Royal Gold can, pursuant to its stream agreement, buy the mined gold for $435 per ounce -- well below the market price.

Because of this business model, dips in the price of gold do not adversely affect the company as much as it does gold miners or those who own bullion. Over the past 10 years, for example, the price of gold has risen about 81%; however, shares of Royal Gold have soared much higher. 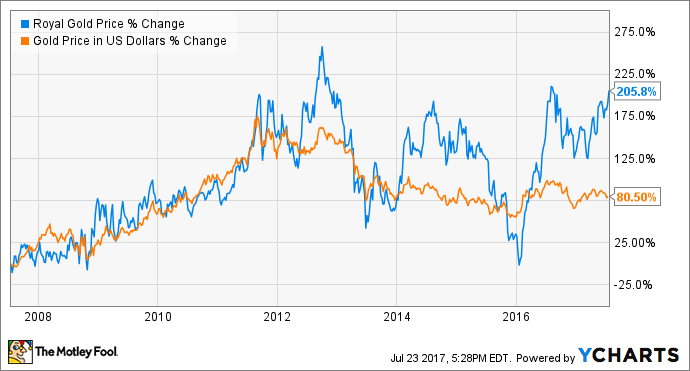 Maintaining a strong balance sheet, Royal Gold has a debt-to-equity ratio of 0.27, and it's conservative when it comes to leverage; its net debt-to-EBITDA ratio is 1.9. Its sound financial health enables it to reward shareholders with a dividend that may not inspire excitement -- the current annualized yield is 1.13% -- but it's better than the non-existent dividend that gold coins and bars offer. Expecting the dividend to continue rising in the years to come, moreover, doesn't seem unreasonable. Since 2001, the company has increased its dividend at a 20% CAGR.

Ideally, our stock portfolios should help us to sleep better -- not cause insomnia. American Water Works and NextEra Energy are two utilities that could help achieve this end. Both companies foresee steady growth in the years ahead, and since they both operate primarily in regulated markets, the companies' expectations can be taken with credulity. Royal Gold, however, also warrants attention. Its ability to prosper despite volatility in the price of gold suggests it's a worthy consideration for a long-term holding.