One would be hard-pressed to identify truly timeless investments. But there is one: water. Investing time and energy in the pursuit of water is as old as civilization itself, and for future generations, some scientists suggest access to water will be an increasingly critical issue. Therein lies the investment opportunity.

So, let's take a look at American Water Works (AWK 0.53%) to determine if its strengths wet your investment whistle.

A formidable moat for outsiders...
One competitive advantage the company enjoys is a high barrier to entry -- a barrier so high that to surmount it would require a Herculean effort. In fact, even a Herculean effort would be insufficient. No sane entrepreneur would consider building new infrastructure to provide an alternative water service. So, in terms of the potential threats of new entrants to the water service industry, American Water Works has no cause for concern. 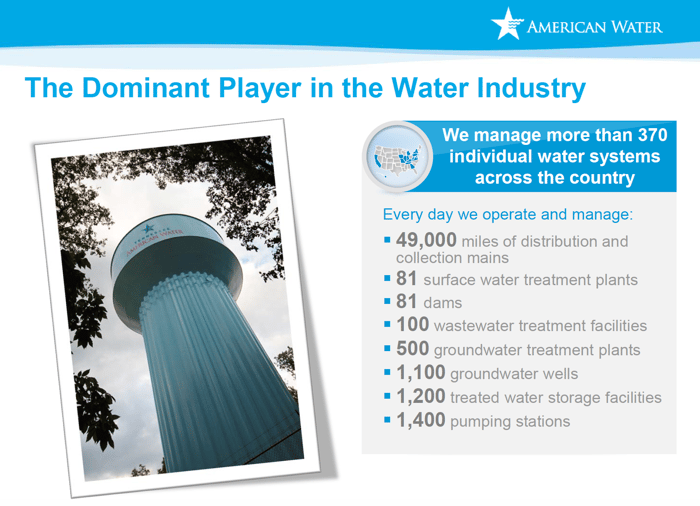 ...and insiders
Safe from outsiders, do American Water Works' peers represent a major threat? No, not too much. With great size comes great competitive advantage. Based on operating revenue, the company is the largest publicly traded water service provider. In addition, American Water Works, at over $12 billion, is the largest in terms of market cap. Nearly doubling that of its closest competitor, Aqua America (WTRG 0.28%), American Water Works is the only large-cap water utility. This size affords the company greater opportunity to pursue acquisitions, which management identifies as "an important element of our growth strategy." 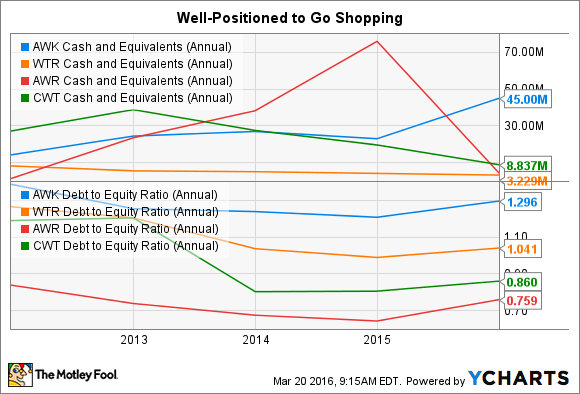 Not only does American Water Works have deeper pockets to finance its acquisitions with cash, but it has demonstrated a consistent ability to manage debt. It has decreased its debt to equity ratio by nearly 7% over the past five years, which mitigates concerns that its ratio exceeds that of its largest competitors: Aqua America, American States Water Company (AWR 0.21%), and California Water Service Group (CWT -0.59%).

Demonstrating its commitment to grow through acquisitions, in 2015, American Water Works spent $64 million on 14 transactions for its regulated business. This translated to an increase of about 24,000 water and wastewater customers. By comparison, Aqua America spent $29 million on 16 acquisitions in 2015, gaining only 18,000 new customers.

American Water Works' 14 acquisitions pale in comparison to its largest deal in 2015: the $133 million acquisition of Keystone, a water management solution company providing service to natural gas exploration and production companies in the Appalachian Basin. For 2015, Keystone contributed $26 million in operating revenue. As of March 1, the company has closed on three acquisitions yielding an additional 5,500 total customers; nine acquisitions, representing 3,368 customers, are pending. 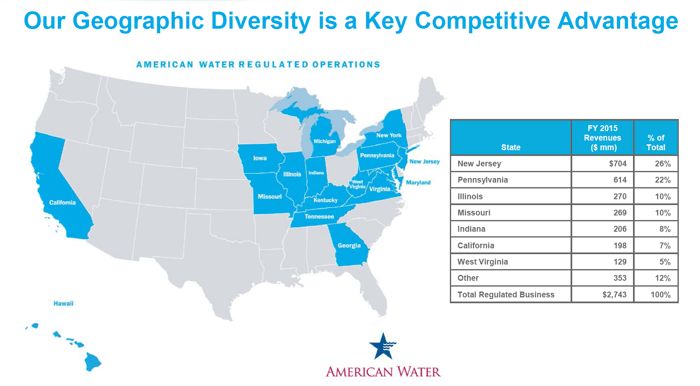 Because of its geographically diversified operations, American Water Works reaps benefits in two ways. For one, the company seeks growth through the acquisition of water and wastewater providers in close proximity to areas where it already has operations. Management recognizes the advantage as it "allows us to integrate and manage the acquired systems and operations primarily using our existing management and to achieve operational efficiencies." The geographical diversity translates to significantly more opportunities for acquisitions than its "geographically limited" competitors.

Secondly, the diversification mitigates the risk of adverse weather conditions. Should one service area experience drier-than-usual weather in a given season, less source water would be available, which would adversely affect the company's operations. Because of the geographic diversity, unseasonably dry weather in a particular territory would not have such a deleterious effect. The company's peers don't enjoy the same benefit.

The takeaway
Utilities aren't the sexiest of companies, but sometimes being plain in best; every portfolio, after all, should retain some degree of diversification between aggressive and conservative investments. For those looking to address that conservative niche, a water utility certainly qualifies, and of those, American Water Works warrants serious consideration -- its competitive advantages drown out its competition.