Share prices for food company Mondelez International (NASDAQ:MDLZ) have been flat the last couple of years. It's no mystery why as business has been in a downward slide, and the recent quarterly results and accompanying announcement that a new CEO will be coming in is confirmation that all is not well. However, with a fresh perspective there could be hope. 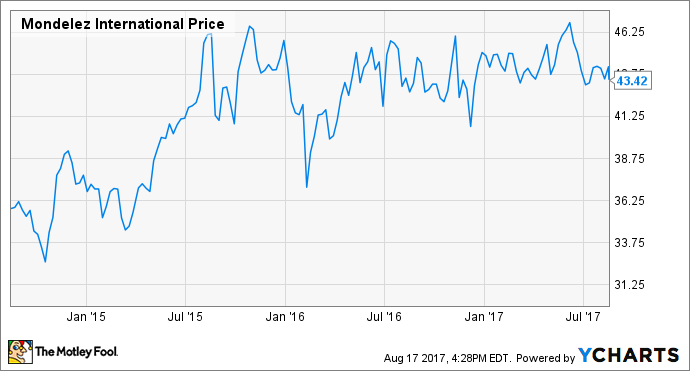 Another quarter of disappointment

In the second quarter of 2017, Mondelez posted a 5% decrease in revenue. Blame was laid on a malware incident that occurred in the quarter, but the downturn in sales has been happening ever since splitting with Kraft Foods in 2012, which is now part of Kraft Heinz (NASDAQ:KHC).

Mondelez has been struggling to grow its portfolio of pre-packaged snack foods in the face of changing consumer preferences slanted toward healthier eating, as evidenced by a 1% drop so far this year in organic growth which excludes divestures. Underperforming names have also been getting sold off, like the sale of VEGEMITE early this year to an Australian company. 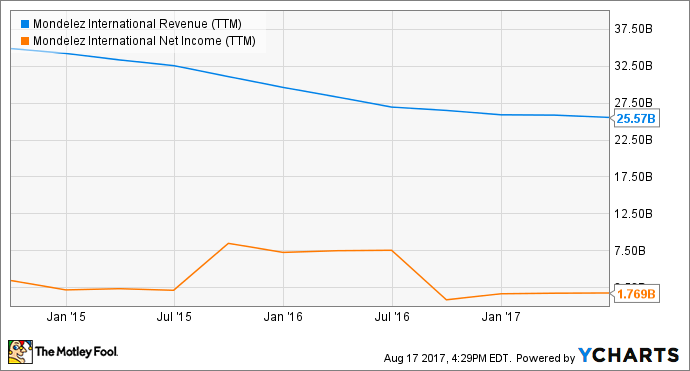 Earnings-per-share saved the quarter, though, with a 10% year-over-year increase. The company has been able to salvage the bottom line a bit through cost savings and getting rid of non-core businesses and refocusing on what it calls its "Power Brands" – like Oreo, Cadbury Dairy Milk Chocolate, and Trident gum.

Breathing life back into packaged foods

Even though the bottom line improved, Mondelez needs to shake things up. It's bread-and-butter brands currently aren't going anywhere, and leaning up operating costs can only go so far. The sales picture will eventually need to improve if the company wants to remain viable long term. 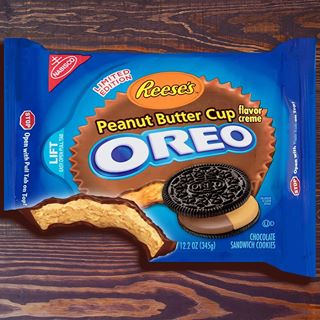 Perhaps in response to this, it was announced along with second quarter earnings that longtime CEO Irene Rosenfeld would be retiring this fall. Her replacement is someone outside of the company, head of the world's largest French fry and specialty potato item company McCain Foods, Dirk Van de Put. Van de Put will be replacing Rosenfeld in November as CEO.

Indicating that top-line sales are of key importance here, Rosenfeld had this to say about the change:

"Throughout his career, Dirk has had a proven track record of driving top-line and category growth, while at the same time improving cost structures and profitability."

It was also noted that in the six years Van de Put was head of McCain Foods, sales increased more than 50%. Little of that was purchased growth via acquisition, as three-quarters of the growth was organic – sales gains using the existing portfolio of food brands. For a simple food staple like the potato, that is impressive business expansion in a short period of time.

Investors who may have been feeling like it was time to jump ship may want to hold on a bit longer. While other food companies like Kraft Heinz pay a better dividend and have offered better returns in recent years, it could be worth holding onto shares of the company because of the bellwether status of brands like Oreo.

With a new CEO coming in and the current Mondelez management team doing some work ahead of him to boost the bottom line, it could be worth waiting to see what a fresh perspective on business operations will bring.