Mondelez International (NASDAQ:MDLZ) owns eight brands with at least $1 billion in annual revenue, including Oreo, Cadbury, Trident, Milka, LU, and Nabisco. Some of these brands have stood the test of time with Cadbury, LU, and Nabisco dating back to the nineteenth century (Cadbury and LU were around before the Civil War). Mondelez management labels these brands as Power Brands -- a label that is used to classify those products that are seeing the most growth, have advantaged assets, and have superior margins compared to other brands it owns. In total, Power Brands made up about 70% of Mondelez's $25.9 billion in net revenue for 2016.

But these iconic brands may not be as strong as they once were. The Oreo maker has been dealing with a major consumer shift in eating habits where more people are choosing "healthier" snacks that are free of high sugar and fat. 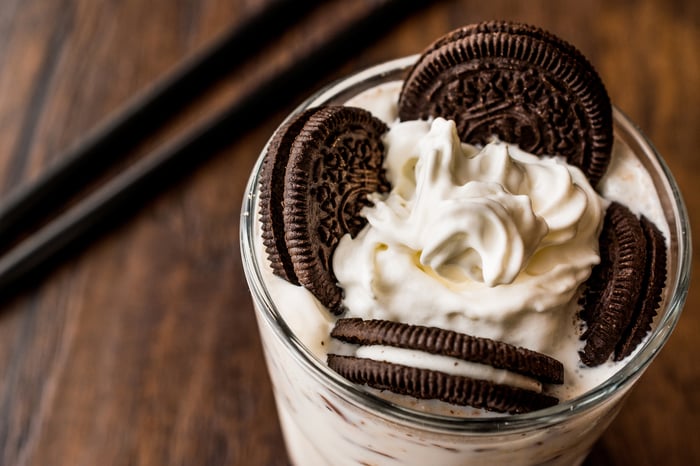 Consumers are losing their taste for the good stuff in life. IMAGE SOURCE: GETTY IMAGES

Other advantages besides brands

But this challenge is unveiling another advantage for Mondelez -- innovation and marketing. The North American market is the most challenging market right now for the snack food giant. First quarter revenue declined 1.9%, which was mainly attributed to weak performance in the company's biscuit products. Mondelez has been answering with brands like belVita, Vea, and GOOD THiNS crackers which are marketed for their lack of high-fructose corn syrup, artificial flavors, and hydrogenated oils among other "bad" ingredients.

This strategy seems to be working as GOOD THiNS were the number one snack food in the U.S. in 2016. The belVita brand has seen high-single digit growth and gained one point of market share in North America in the first quarter. Vea is a new brand that is planned for launch in July. Mondelez is also renovating its existing Triscuit brand to fit with its line of healthy snacks.

These successes demonstrate Mondelez's ability to identify consumer shifts in taste and preference and market new products effectively. With clever marketing, Mondelez has even been able to turn the iconic Oreo brand into a cool brand in the minds of teenagers recently.

Recently, Tim Cofer became the company's Interim President of the North American region and also serves as Chief Growth Officer. Part of his task in the short-term will be taking more aggressive action to use Mondelez's North American direct-store-distribution network to get the North American market growing more strongly.

How strong are Mondelez's traditional brands?

It's definitely a big advantage for Mondelez to be able to answer consumer shifts with new brands that perform well. The company clearly has a talented team of managers who have in-depth research on consumer trends and know how to market its products accordingly. But this begs the question of whether classic brands like Cadbury chocolate and Nabisco are as strong as they have been in decades past. We can't discount the massive consumer shift away from sugary foods in developed regions like North America.

So, are brands like Cadbury and Oreo worthless, then?

Well, just eat an Oreo and tell me that it's worthless. Health-conscious snackers in North America might have lost their taste for sugar, but Mondelez is finding shoppers with big sweet tooths in emerging markets. Cadbury chocolate was up double digits in India in the first quarter. Also, there has been a stronger appetite for Mondelez's chocolate products in China, where the company is building strong brand awareness with its Milka brand. Mondelez has also found solid growth in Russia, Germany, Brazil, and Mexico.

Mondelez is building up a strong e-commerce business forming partnerships with Alibaba, Amazon.com, Wal-Mart Stores' online business, and Tesco. In 2016, Mondelez's net revenue from e-commerce channels grew 35% and management is targeting at least $1 billion in revenue from online sales.

Snack food is a growth market

Believe it or not, Mondelez is working with a good tailwind in snack food overall. Mordor Intelligence estimates the global snack food market to grow 5.8% per year reaching $630 billion by 2022. More consumers these days want convenience and they are turning to snack food, just not the sugary kind. Since Mondelez's best known brands are the sugary kind, it may not have as wide of a competitive moat as it once did.