Two weeks ago, The Kraft Heinz Company (NASDAQ:KHC) made a blockbuster deal with Oprah Winfrey to become the face of the company's new line of branded soups and side dishes. The landmark deal is part of Kraft-Heinz's brand innovation strategy to boost future growth. The company is now looking for ways to boost revenue amid significant headwinds in the packaged goods industry.

The Oprah deal marks Kraft's attempt to appeal to more modern tastes: that means evolving their products to use more healthy, natural ingredients in line with current consumer taste. The line will be called, "O! That's Good!," and include both soups and side dishes made from natural ingredients. According to the Associated Press, the new brand, "will offer comfort foods with added vegetables, such as mashed potatoes with cauliflower mixed in. A broccoli cheddar soup has butternut squash to replace some cheese. 'This product line is real, delicious food with a twist,' Winfrey said."

While the products have already begun hitting some grocery store shelves, they will not roll out nationally until October. Kraft Heinz seems to be aiming for a middle ground -- continuing to play to its strengths of tasty comfort foods, but with more natural, healthy "twists."

Clearly, the company needs to find a way to modernize its portfolio.  Last quarter, sales fell 1.7%, continuing a trend of revenue declines for the company. While Kraft-Heinz has been successful at boosting the bottom line, this has been due to 3G's signature cost-cutting initiatives. That seems to have run its course two years after the company was formed through the merger of Kraft and Heinz. Since then, the company has increased net profit margins to roughly 17% from roughly 6% prior to the combination.

However, there is only so much juice the company can squeeze from that stone. Now that the fat has been cut, 3G and Co. must find a way reignite top-line growth.

As I previously wrote, reigniting sales won't be easy. The traditional consumer packaged goods industry is facing numerous headwinds, having to battle grocery store consolidation, the rise of private labels, and changing eating habits trending toward natural and organic foods. Thus, Kraft's legacy brands are being squeezed by cheaper, private-label brands from below, and natural, organic foods from above.

Faced with these headwinds, it seems the only strategy left is to innovate -- investing in both product development and marketing in tandem so that consumers will be compelled to seek out Kraft-Heinz's offerings over cheaper or healthier alternatives.

Given these limited options, Oprah is a coup for Kraft-Heinz and a masterstroke by 3G's management team. A widely known talk show host, actress, publishing and media entrepreneur, and advocate for healthy eating, Oprah has actually been discussed seriously as a 2020 presidential candidate. In fact, a Public Policy Polling Survey was recently conducted to gauge Oprah's 2020 chances. On that front, she bested Donald Trump in a head to head matchup based in favorability ratings..

She also has credibility in the food space. In 2012, Oprah actually bought a farm in Hawaii to grow and sell organic food, and recently trademarked the names "Oprah's Organics," "Oprah's Harvest," and "Oprah's Kitchen." Then there is Oprah's epic investment in Weight Watchers, Inc. (NASDAQ:WW). A previous spokesperson for the company, Oprah took a 10% stake in Weight Watchers in October 2015 after the company had fallen on hard times. To get a sense of the "Oprah effect," here's how Weight Watchers has done since: 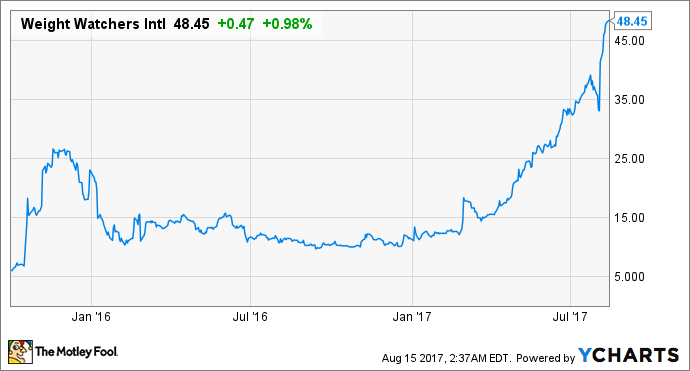 That's an 8-bagger in less than two years. Behold, the power of O.

In case you were wondering, yes, Oprah is still involved at Weight Watchers, but will not have a conflict. The Kraft products will not promote weight loss, but rather the natural and healthier twist on Kraft' Heinz's traditional comfort foods.

I wouldn't expect these types of returns for Kraft-Heinz, as the Oprah line will only be a single brand for the large conglomerate. Still, the new partnership suggests Kraft-Heinz's management is serious about innovation and rebranding the company for a new era. That's certainly the right strategy to reignite growth, but if Oprah-branded food doesn't end up working, I can't imagine what will.