I have long been intrigued by the potential for awesome returns from stocks that call Brazil home. The country has experienced tremendous growing pains in recent years spanning political scandals and economic recession. However, several companies with global ambitions that have been swept up in the misery have made solid arguments for long-term investing potential.

Braskem (NYSE:BAK) has been at the top of my list. As the largest petrochemical manufacturer in Brazil, and the largest renewable-chemicals manufacturer in the world, the company has a solid foundation to build upon. The latest strategic vision for long-term growth calls for intelligent expansion in North and South America to diversify feedstock capabilities away from crude oil derivatives and toward cheaper shale natural gas. It promises to pay off handsomely.

Then again, the company hasn't been making investors wait to reap rewards: It has trounced the S&P 500 in recent years and pays a dividend that last yielded 3.2%. I say "last yielded" because the annual April payment was postponed (for good reason) this year. That raises the question: How safe is Braskem stock and and its dividend? 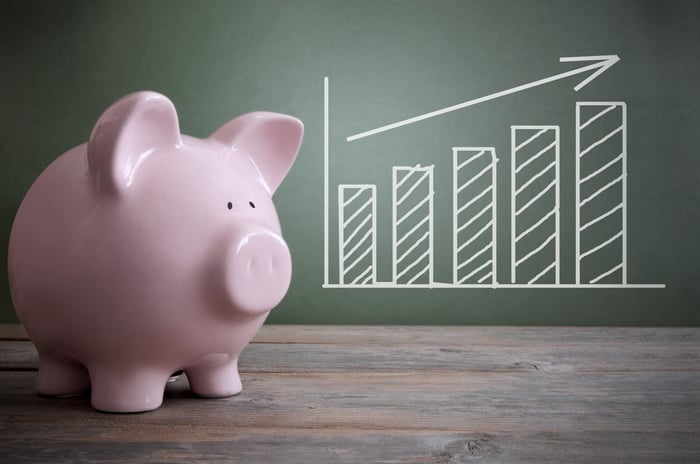 Recent developments by the numbers

Braskem turned in a respectable performance in the first half of 2017 for its three segments: Brazil, U.S. and Europe, and Mexico. 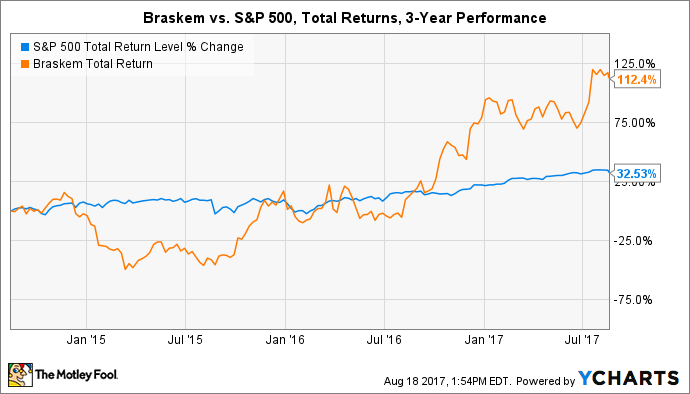 The company decided to boost production volumes 13% in Europe for the foreseeable future to take advantage of favorable margins there relative to international markets. Meanwhile, in late June Braskem announced it would build a 450,000-metric-ton-per-year polypropylene (PP) plant in Texas, with start-up expected in 2020. It will be the largest PP facility in the Americas and the first built in North America since 2005.

Meanwhile, its new polyethylene (PE) complex in Mexico continues to provide the biggest boost to Braskem's performance. It's the largest privately owned petrochemical facility in Mexico -- churning out 1.05 million metric tons per year -- from cost-advantaged ethane, a natural gas derivative. It only started operations in the second quarter of 2016 and will allow Mexico to drastically cut imports of PE.

Margin recovery in petrochemicals has largely been a global phenomenon, but Braskem has made moves to ensure the improvements stick. Diversifying feedstock away from costlier naphtha home and abroad, or sticking to it in Europe when it favors the business, are signs that management is controlling what it can. The company even began importing cheap ethane from the United States to convert up to 15% of its Brazilian PE capacity off of domestic naphtha. That should help to provide a larger cushion when future volatility arrives.

Simply put, operations are continuing to improve. Growth projects are paying off and more are on the way. That makes Braskem well-positioned for growth and healthy profits for the foreseeable future. While that should help the stock, investors interested in the dividend should be curious about the sustainability of the company's cash flow and health of its balance sheet.

Investors may scoff at the current state of the balance sheet, which, as is the case for many Brazilian companies, sports a relatively high amount of debt. Braskem ended the second quarter of 2017 with a debt-to-asset ratio of 65%. Surprisingly, that's an improvement from the year-ago period, when the debt-to-asset ratio stood at 68%.

Importantly, the company has made respectable progress reducing its net debt-to-EBITDA ratio in recent years, while in the first half of 2017 its cash flow has improved when one-time changes in working capital are excluded.

Investors will notice that Braskem didn't make a single dividend payment in the first half of 2017. While it usually only makes a single distribution each year, it has routinely done so each April. What's going on?

Well, management made a large special dividend payment in the fourth quarter of 2016 to provide liquidity to parent companies Petrobras and Odebrecht, which own a combined 74% of Braskem. More recently, the petrochemical manufacturer made a $192 million payment in the global settlement for its role in the Brazilian political scandal.

The good news: Braskem has $2.6 billion in cash and has no formal plans to skip a dividend payment sometime in 2017. The bad news is that the company still owes approximately $500 million of $813 million in fines from the global settlement.

On one hand, Braskem is becoming a finely tuned petrochemical machine with healthy margins in all three operating regions. It continues to diversify the business to shield shareholders from volatility and invest in growth projects to drive future returns. That will be great for the dividend in the long run.

On the other hand, despite improvements in operating cash flow that are expected this year, it may be difficult for the company to responsibly distribute a dividend in 2017.

Long story short: Investors looking for long-term potential and healthy profits may find what they're looking for in Braskem stock. But don't be shocked if there are no dividends paid in this calendar year.