Sure, we're already more than halfway through the year, but that doesn't mean you missed the boat on the very best Silicon Valley stocks to own.

"Why Silicon Valley?" you ask. There are great companies all over the world, but nowhere is there a concentration of technological disruptors quite like those packed into the area between San Jose and San Francisco, Calif. If you go hunting for stocks here, you're bound to find a dynastic wealth-maker. 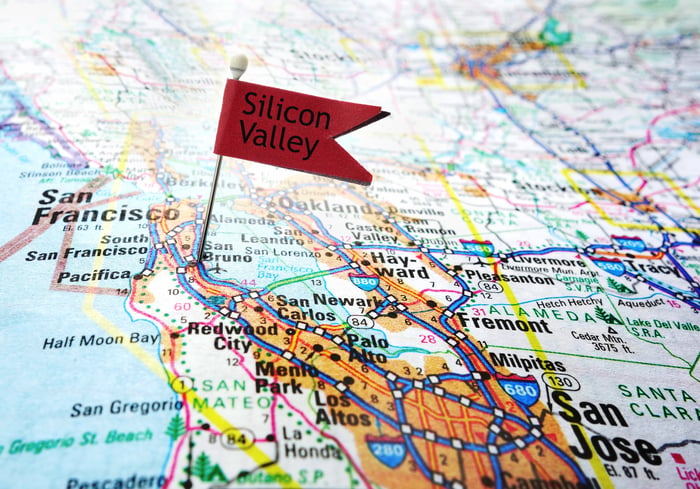 The five stocks I'll be talking about today are:

So far this year, the collection of stocks is already up an average of 35%, but there are three key reasons that I think all five are still worth owning for the end of 2017 and well beyond.

Wide moats that are only getting harder to cross

A moat is another name for a sustainable competitive advantage. In the simplest of terms, it explains why one company will succeed over time -- and why the competition won't be able to copy or compete.

Two of these companies benefit from the moat of the network effect. We'll use Facebook as an example: With each additional user that joins Facebook -- or its subsidiaries of WhatsApp or Instagram -- other potential users have further incentive to join. After all, what's the point of joining a network no one else is on? That creates a powerful and virtuous cycle for Facebook. Ellie Mae also benefits from the network effect, as it helps connect real estate agents, title officials, regional banks, and appraisers. The more that join, the more others are incentivized to join.

Another key advantage comes from high switching costs. Veeva offers up cloud solutions that are tailored to the drug industry. If you want to take a product from idea through FDA trials, and then to market -- all while tracking the sales performance of your team -- you can do it all on a single Veeva platform. But imagine what a pain it would be -- in time, energy, and money -- to switch away from that single platform.

Intuitive Surgical benefits from the same advantage. Hospitals fork over millions of dollars for daVinci machines, and doctors have put in hundreds of hours on them, in an effort to improve patient outcomes and speed up the process of surgery. Switching away to a new machine platform would be an enormous waste of the already-sunk costs.

And then we have simple share and market scale. Google is one of the most powerful brands around. There's a reason it's entered our lexicon to mean that we're looking -- "Googling" -- for something. That ubiquity allows the company to collect data on an unthinkable scale -- which only Facebook can match.

All of these are powerful moats that will keep the competition frustrated for years.

Management with skin in the game

Second, all five of these companies are run by teams that have skin in the game. Here's what I mean:

I consider this important because no one has a greater existential motivation to build a quality company that can stand the test of time than company founders do. The company becomes an extension of themselves and the marker of their legacy.

But it's not just that: At each company, management owns quite a bit of shares, too.

Obviously, I'd love to see higher levels of insider ownership at Ellie Mae and Intuitive Surgical, to be commensurate with the rest of the Silicon Valley pack.

That being said, these are still solid numbers across the board, and I can rest easy knowing that my own skin -- via stock holdings -- is just as much in the same game that management's is in.

A war chest for tough times

Finally, we have the issue of cash. Successful Silicon Valley companies are flush with it, and start-ups are desperate for it. I think it's important to own a company that has not only sustained levels of cash coming in, but a lot just sitting on the sidelines as well.

While some might think that's boring, I believe it helps a company become stronger during downturns -- whether macro or industry-specific. If you have cash, you can gain market share as a result of crises and improve your long-term outlook.

Here's how all five stand over the past 12 months, keeping in mind that they vary in size from a $650 billion behemoth (Alphabet) all the way down to a sub-$3 billion small cap.

While the absolute levels are all over the place, here's the takeaway: All five companies produce tons of cash flow, all five have virtually no debt, and all five have very comfortable war chests.

While their shares might suffer in the event of a market downturn, it will be short-lived. The companies themselves are very strong, and that's what makes them the top Silicon Valley stocks to own in 2017.