Paycom Software (NYSE:PAYC) can seemingly do no wrong, having recently reported the latest in a string of impressive quarterly results. With its history of outperformance, you'd think the company's edge would be fairly easy to define -- but that isn't quite the case. In fact, I've written before that I don't think Paycom's payroll and workforce management software contains any single thing its clients can't get elsewhere. At a recent conference appearance, however, CEO Chad Richison spoke about a few of the things that help Paycom differentiate itself from the likes of industry giants like ADP (NASDAQ:ADP).

Employee engagement is the key

Paycom's software application is an all-in-one model that runs on a single database in the cloud. This eliminates the integration headaches sometimes caused by using multiple software providers for various functions -- everything from payroll and time entry to performance reviews and governmental compliance.

Richison noted that unless a company is using Paycom, it's using multiple products cobbled or interfaced together. And that tends to discourage employee engagement. Paycom tries to drive home its system's ease of use to its clients' employees and believes this type of "self-service" is the future of HR.

The only way HR gets the information into the system is from the employee, and how are they gathering that? ... I believe the world is conspiring to help us in this. But as of now, we're still dragging people over the bridge into employee usage, just because they're not used to it.

Richison also said Paycom's real value doesn't shine through unless a company can actually get its employees to actively use the system.

Usage drives retention. I mean, if you have a client that bought 100% of the software, and they're using 4% of it, that's a client that's about to leave us. 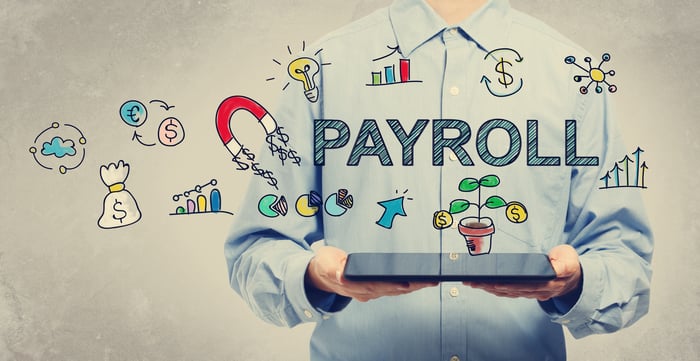 R&D is a huge priority, yet spending is below competitors' levels

One of Paycom's most closely watched expenses is research and development (R&D). The company invests heavily in R&D as it continues building new software modules. Yet some analysts wonder how a company that keeps stealing market share manages to spend less on R&D as a percent of revenue than its competitors.

Richison said that R&D expenses may look a bit artificially low since the company is "a little bit late to the party" on certain items it could technically include. As one example, Paycom's tax research department doesn't get reported as part of R&D. Regardless, the company has grown its R&D expenses at between 80% to 100% each quarter (compared to the prior year's quarter) since its IPO, and this number essentially reflects headcount growth. While Richison says Paycom won't ever spend more on R&D than the competition, it has no plans to restrict its R&D growth moving forward:

This year's hire produces next year's technology ... I believe a good indicator of how you're doing in R&D is what you're putting out there, and I'm unaware of anybody that's put [out] the same type of technology that we've been able to put out.

Carving out a niche in a hypercompetitive market

As the payroll and human capital management (HCM) industries continue to converge, the space is only getting more competitive. And while the overwhelming majority of Paycom's business comes at the expense of ADP, there's no shortage of suitors trying to capture the same clients. Richison stated:

Every deal's a dog fight, I like to say.

...if you're a small business, you might only need payroll, so our value proposition starts to break down if you go small. Same thing if you go way up to 30,000 employees. Our value proposition starts breaking down, because then they only want payroll also, because they're going to build SAP, Oracle or something around it to finish it out ... we stay in our market, because in the mid-market they will use 100% of what you're providing ...

A different kind of hiring strategy

When it comes to its sales force, Paycom says it looks for analytical people with a college degree. That sounds pretty straightforward, but here's the twist. Paycom won't hire you if you have ever worked for one its competitors. While that may sound a little crazy, this policy has worked out pretty well so far as Paycom's sales machine continues to put up big-time growth numbers.

When the company does hire someone with a sales background (from another industry), Richison says they generally look for people with less than three years of experience. This means that the salespeople Paycom hires are usually either fairly recent graduates or people looking for a career change. My read on this is that Paycom doesn't recruit the types of salespeople who bring the baggage of a set way of doing things to the job. But it still seems remarkable that in this $4 billion company, only the CEO and the Chief Sales Officer have ever worked in a sales capacity for a competitor.

While the payroll and HCM industry is more competitive than ever, Paycom's unique way of doing things has helped fuel its impressive growth over the last few years. I expect more of the same from this serial outperformer in the years ahead.