Amazon (NASDAQ:AMZN) has expressed interest in investing in live sports rights for about a year, and it made a big splash when it won the streaming rights to Thursday Night Football in 2017. At the time of that news, I predicted that it would have a bigger impact on Amazon's international Prime subscriber base than its domestic customers (who can just watch the games on broadcast TV).

Amazon is still looking to secure live sports for its subscribers, but in the meantime, it's done the next best thing. It's offering an a la carte add-on for Discovery's (NASDAQ:DISC.A) (NASDAQ:DISC.B) (NASDAQ:DISCK) Eurosport Player channel in Germany and Austria. This will allow Prime subscribers in those countries to watch Bundesliga football matches, PGA tennis, the 2018 Olympic Games, and more without a cable bundle. What it will require, however, is a Prime subscription. 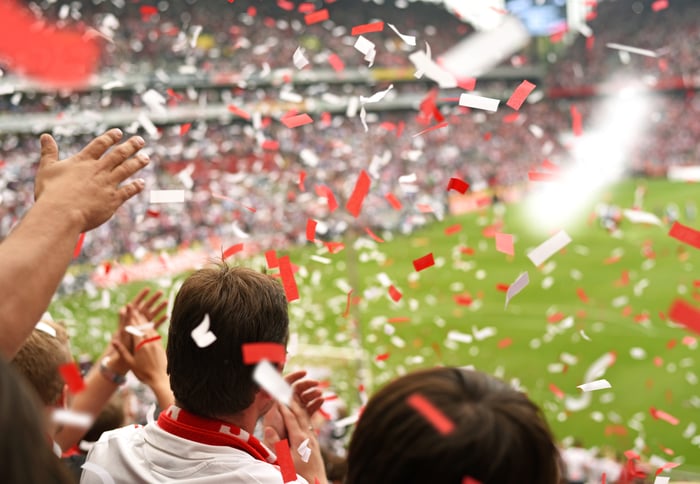 Delivering sports over the top

Sports have remained the last bastion for traditional cable over the last few years as more and more consumers cut the cord. Networks with live sports have been able to charge a premium to distributors, but sports leagues are the bigger winners as they successfully demand higher prices for their broadcast rights. But even that's starting to fall apart.

Walt Disney announced plans to offer a stand-alone ESPN streaming service starting next year. CBS is working on a sports channel to complement its CBS All Access streaming service. As more consumers cut the cord, weighing on ad revenue, both companies are looking for ways to monetize sports fans.

Amazon is trying to get ahead of the trend by filling this important void after a consumer cuts the cord. By partnering with Discovery, it's able to provide access to sports without spending money on the costly rights. So even if only a few people end up subscribing to the Eurosport Player channel, Amazon isn't risking much of anything. On the other hand, if lots of consumers decide that Amazon Prime with Eurosport is superior to cable, it not only wins a share of the monthly subscription revenue for the Eurosport channel, it should attract lots of new Prime members as well.

Not a lot of competition

At the moment, there aren't many stand-alone sports streaming options on the market. FuboTV launched a soccer package, but it's morphed into yet another skinny bundle of streamed entertainment. It simply couldn't attract enough subscribers to pay $10 each month.

But Amazon's advantage is that it can go after niches like the original FuboTV while still offering attractive price points due to the fact that it's all subsidized by Prime. Amazon doesn't need to make a profit on distribution if additional Amazon Channels and Prime Video content help sell more Prime memberships. Comparatively, cable companies are looking to make a profit on every bundle of channels they sell, because that's the only way they generate revenue.

Netflix has stayed away from sports, and its CEO has gone so far as to say it can't add any additional value to sports content. In effect, Amazon's biggest streaming competitor has taken itself out of the running for this huge opportunity.

If Amazon can strike more deals similar to its agreement with Eurosport, it can offer sports fans a truly competitive alternative to cable. Subscribe when your team is playing, or subscribe to a different channel to fill the time when it's not. There are dozens of other sports networks Amazon could partner with.

The e-commerce giant could also look to make deals directly with sports leagues. And since its primary focus here is sports favored by Europeans such as soccer, tennis, formula one racing, and cricket, it may be able to acquire those rights for far less than what the major American sports leagues demand. Without much competition, it could attract a lot of new viewers to Prime, which naturally translates into more shoppers on its marketplace.