Believe it or not, sourcing, manufacturing, and delivering wood pellets has turned into a huge business. As power companies in Northern Europe are forced to reduce greenhouse gas emissions and have sustainable inputs, they have been left with an odd puzzle: how to wean themselves off of coal while waiting for solar and wind options to become viable at a larger scale.

That's where Enviva Partners (NYSE:EVA) comes in. The company -- based in Maryland but with operations primarily in the American Southeast -- is the largest global provider of wood pellets for said power companies. As a limited partnership, the main draw of buying shares is the company's outsized dividend: currently at over 8% of this year's expected payout.

It begs the question: is this dividend too good to be true? Is this monster dividend stumbling?

Ideally, a company will be able to keep their coverage ratio between 1.15 and 1.50. The company is devoting a huge portion of its DCF to paying you back, while still maintaining a margin of safety to continue funding its operations. Here's how the company's coverage ratio has broken down since going public in 2015.

As you can see, things were moving along quite well until last winter, when coverage ratios began moving south quickly. Traditionally, the first quarter is the company's softest, so no one was too surprised when the coverage ratio stood at 1.00 back in May.

But the most recent ratio spooked investors, sending shares down as much as 5% immediately following the earnings release. Here's what CEO and founder John Keppler had to say about the quarter:

"In the second quarter and carrying over ...[to] the third quarter, we are behind where we want to be on production volumes. This is principally driven by the decision we made to modify our process, to further improve pellet quality... And it has taken us a bit longer than we initially expected...So here is what we see going forward. The third quarter will likely look a lot like the second quarter."

There's obviously some give and take in that statement. If Enviva wants to remain the preferred provider of wood pellets in Europe -- and more recently, Asia -- it needs to be sending out high-quality pellets. That means sacrificing short-term DCF for long-term contracts that should produce even better returns.

It helps take the sting out of the 14% decline in the company's DCF.

I've already owned shares of Enviva in my own portfolio -- but had to sell them when my family bought our first house. I've been waiting for the right time to buy back in, and when Motley Fool trading rules allow, that's exactly what I'll be doing.

First and foremost, I see the company's decision to focus on outfitting their existing plants as a wise long-term move: if the pellets aren't of the highest quality, the business is as good as dead.

At the same time, I see an enviable moat forming around the company in the form of lower production costs. Booming revenue growth isn't the key to the future here, operational efficiency is. 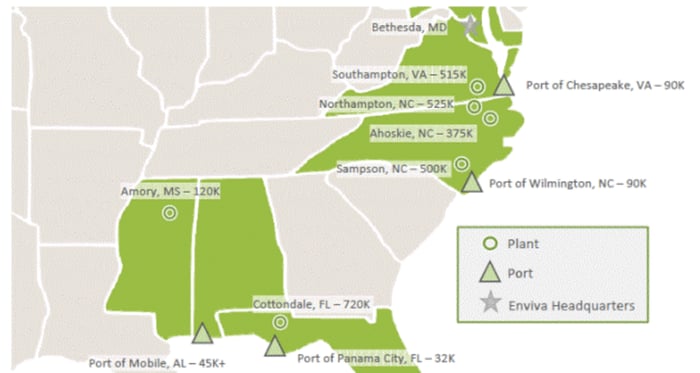 By having four deep-water ports -- two of which are wholly owned, and six production plants in a tight cluster with access to rail, there are few -- if any -- producers worldwide who can match Enviva's scale.

While the most recent quarter was somewhat disappointing, the key metrics for the company remain strong.

While the backlog has actually shrunk over the past two-quarters, this isn't overly concerning: as I said, operational efficiency trumps revenue growth at this point. Every bit of efficiency the company can squeeze out both lowers the cost of production versus the competition and offers more DCF for shareholders to collect.

It's important to note that my position will likely be less than 1% of my overall holdings. There's no doubt that these power plants will consider solar and wind technologies when they become available. Despite take-or-pay contracts that average almost a decade, this is a concern to remain aware of. That being said, an 8% dividend yield is hard to pass up, and I think it could add some needed diversity to just about any portfolio.