Both the Dow Jones Industrial Average and S&P 500 posted decent gains for the week, moving 0.64% and 0.72% higher, respectively. While investors were hoping for potential hints from Federal Reserve Chairwoman Janet Yellen and European Central Bank President Mario Draghi, neither gave investors any direction in regard to future monetary policy moves. The good news is that despite that letdown, investors had plenty of other juicy stories to ingest. Here are a few highlights.

Too crazy to be true. Right?

There are always crazy developments in the stock markets and the plethora of publicly traded companies, and it makes a weekly recap fun to write. But a claim from short-seller Aurelius Value created a short-lived ruckus that sent shares of Petmed Express Inc. (NASDAQ:PETS) down as much as 19% during trading Wednesday before recovering most of that loss. But the story is wild: The short-seller put out an article positing that Petmed's "new-generation medications" are opiates targeted at opiate users who would use their pets' medications.

It's difficult to believe a company would act so unethically. But it's also true that Aurelius Value is a short-seller and could have an interest in driving the company's stock price lower. Either way, the Aurelius article that started the controversy put Petmed in a bad light.

It was obviously in Petmed management's best interest to respond quickly. Essentially, the company denied the charges and intends to report the manipulation of the stock price to the appropriate regulators. It also mentions that tramadol and gabapentin, the drugs allegedly targeting opiate users, have not been driving growth and represent only 0.4% of total sales year to date through June -- and that "new-generation medications" growth is driven by new flea, tick, and heartworm control products. 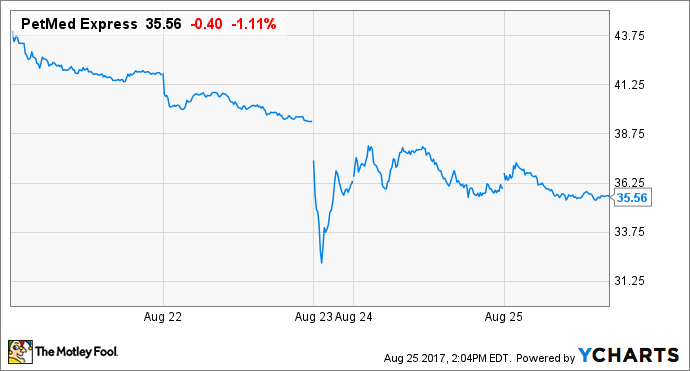 If the five-day trend in Petmed's stock price is any indication, the allegations were met with immediate shock before the report was largely dismissed and the stock got back on track.

What's going on in Detroit?

Where there's smoke, there's fire, and there's been plenty of smoke and rumors swirling around Fiat Chrysler Automobiles (NYSE:FCAU) this week. First came rumors that there could be a couple of potential Chinese automakers interested in buying some or all of FCA, giving Chinese automakers a secure foothold in a more lucrative North American market. At a time when Chinese automakers have finally narrowed the quality gap, at least to some extent, it makes sense now more than ever.

In fact, Great Wall Motor Co. told Automotive News it was indeed interested in buying the Jeep brand, easily the most valuable part of FCA. Morgan Stanley analyst Adam Jonas believes Jeep alone to be worth the equivalent of $17.20 per share -- very telling when you consider that FCA currently trades at just under $15 per share.

But that wasn't even the last of the intrigue surrounding FCA this week. "With Great Wall expressing a clear interest in all or part of Fiat Chrysler, the focus shifts from earnings to breakup value potential," Exane BNP analysts Dominic O'Brien and Stuart Pearson said in a note Wednesday, according to Automotive News. That snippet suggests that FCA is thinking a bout spinning off the ultra-premium Maserati and and Alfa Romeo brands, and sources told Bloomberg one option would leave Jeep tied with Fiat Chrysler to help support mass-market car production while growing the former globally to power profits.

This all becomes much more plausible when you consider that FCA carries much more automotive debt than its Detroit counterparts and could use capital to drive its turnaround. It's also been bought and sold multiple times, and the Agnelli family wants to sell some of its stake to lessen its dependence on the volatile automotive business. Nobody knows how this will all shake out, or when, but there's definitely smoke coming from FCA.

When bad is good enough

It wouldn't be an interesting weekly recap without a questionable market reaction to earnings. In this instance, shares of clothing retailer Express Inc. (NYSE:EXPR) jumped 24% during intraday trading Wednesday, after the company announced results that managed to top estimates while remaining uninspiring -- and we've seen the opposite this week as well.

Express' top-line revenue dropped 5% compared with the prior year, down to $478.5 million, driven by a 4% decline in comparable-store sales. The company's bottom line reported a GAAP net loss of $11.8 million, or $0.15 per share. Adjusted for expenses, however, including the exit of Canada, it reported earnings of $0.01 per share, which was two pennies per share better than analysts' estimates.

While the results were far from inspiring or glamorous, the results did at least check in at the higher end of management's guidance, even as brick-and-mortar stores -- especially mall-based ones -- have been hit hard this year. Combine meeting management's high-end guidance with a 28% increase in e-commerce sales over the prior year, and it was a good enough quarter to prop up a stock that's declined 44% over the past 12 months.