The strong run-up in the stock price of Deere & Company (NYSE:DE) was rudely interrupted by the negative reaction to the recent third-quarter earnings report. Why did the market react like this when the company raised full-year net income guidance from $2 billion to $2.075 billion? To try answering this question, let's look at the five key takeaways from the earnings presentations. 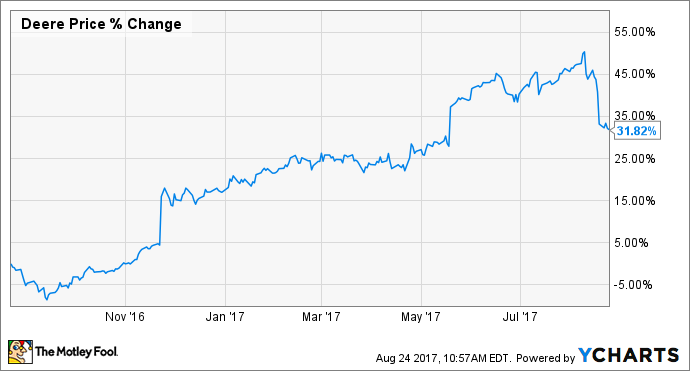 The guidance increase was largely down to tax and currency

As noted, net income guidance was raised, and management increased full-year net equipment sales guidance to growth of 10% from 9% previously. So what is there not to like about the guidance?

On closer inspection, the guidance increases are less impressive than they superficially appear to be:

Delving deeper into the results, we see that full-year sales growth guidance increased to 9% from 8% for the key agriculture and turf segment -- which accounted for 78% of total equipment sales in the first-nine months -- but this increase was due to more favorable currency movements, implying that the underlying outlook hasn't changed. On a more positive note, full-year sales guidance of 22% for the construction and forestry segment increased from 13% to 15%, in line with the more positive outlook Caterpillar recently gave. 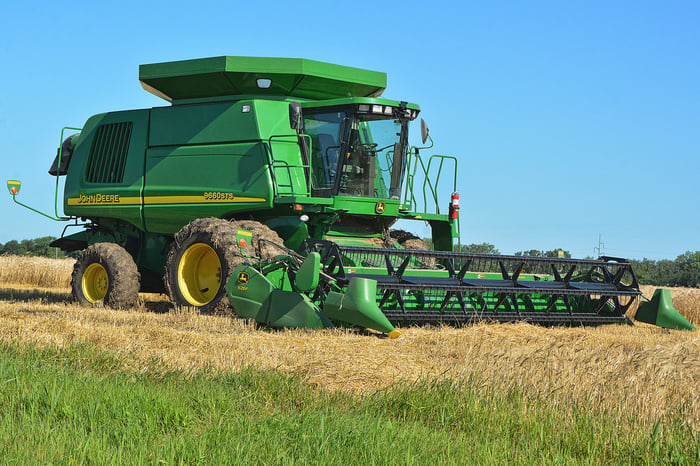 On the earnings call, analysts questioned the margin outlook for the agriculture and turf segment. In a cyclical recovery, it's reasonable to expect significant margin expansion as sales growth kicks in, particularly with a company that has managed margin as well as Deere has during the downturn.

Credit Suisse analyst Jamie Cook was "disappointed" by the segment's margin in the quarter, and Wells Fargo Securities analyst Andrew Casey asked why the company expected a "step down" from Q3 to Q4 in comparison with the prior year.

"Material cost continues to be a headwind as we think about the fourth quarter," investor-relations director Tony Huegel replied, echoing a familiar refrain from the current earnings season. Essentially, steel and other input production costs have increased more than expected, but then again Deere isn't the only industrial company saying that at the moment.

Deere's dealing with its challenges

The next two takeaways reflect positive developments on two issues that may be concerning to Deere investors. The company has been increasing the amount of equipment it has on operating leases. That's largely because farmers have been reluctant to buy equipment outright, as their incomes have been pressured by falling crop prices. In fact, U.S. net cash farm income has fallen every year since 2013.

The fear is that a glut of used equipment will hit the market when the operating leases expire. On this front there are two pieces of relatively good news. First, the rate of growth in equipment on operating leases has slowed in 2017, as equipment sales have increased. 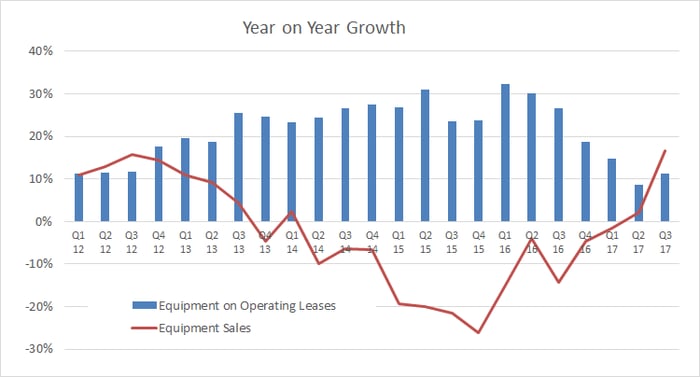 Second, management's commentary on used equipment inventories was positive. Focusing on large agricultural machinery -- the hardest-hit area of Deere's sales -- Huegel said: "[A]t the end of our third quarter, we're down about 37% from the peak, which would have been in summer of 2014. Last quarter, we were down about 36%, and a year ago, at this time, we were down 23%."

In a nutshell, Deere is doing a good job of reducing used inventories, and that should alleviate potential pressure from the expiration of operating leases in the future.

Finally, Deere chief economist J.B. Penn gave a positive description of trading conditions for crop prices. Essentially, he described an asymmetric situation whereby "recent commodity trading ranges" are expected for the future, but with potential upside from "adverse weather events" and "minimal downside risk." If true, that would be a trader's dream.

The basis of his argument is that cost structures and "market fundamentals" have laid a floor on pricing, which is good news for Deere. Meanwhile, the United States Department of Agriculture is forecasting an increase in farm income for 2017, and low-interest rates along with good credit quality are supportive of the demand environment for Deere's machinery.

The lack of an increase in underlying sales guidance for the agriculture and turf segment is a disappointment, and rising costs are pressuring margin, so it's not surprising that the market took a dim view of the earnings report. On the other hand, long-term investors will be pleased by the improving end-market outlook and Deere's management of used-equipment inventories.