With the deal, the antiviral drug specialist dives headfirst into CAR-T cancer therapies.

Gilead Sciences (GILD -0.99%), prompted by its falling sales of its hepatitis C drugs over the past year, has finally pulled the trigger on a much-anticipated buyout: On Monday, it offered to acquire Kite Pharma (NASDAQ: KITE) for $11.9 billion in an all-cash deal. Kite's shares were up by 28.87% in pre-market trading on heavy volume as a result.

Kite is a leader in the field of next-generation cancer treatments known as chimeric antigen receptor T-cell (CAR-T) therapies. The biotech's lead CAR-T candidate, axicabtagene ciloleucel, or Axi-Cel for short, is currently under review by the U.S. Food and Drug Administration as a potential treatment for aggressive non-Hodgkin lymphoma. The FDA is expected to hand down a final decision on Axi-Cel in November. 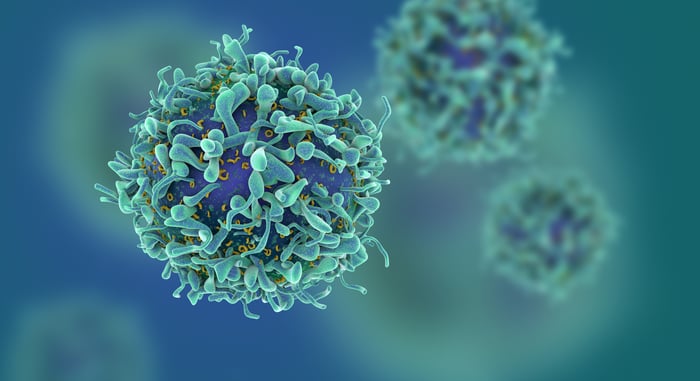 Shares of fellow CAR-T developers Bellicum Pharmaceuticals (BLCM 4.30%) and Juno Therapeutics (JUNO), and ZIOPHARM Oncology (ZIOP 11.82%) are all trading in positive territory on the back of this news.

Not long ago, the future of the CAR-T therapies was in serious doubt after Juno Therapeutics' then-lead clinical candidate, JCAR015, was shelved due to a handful of patient deaths. The big picture issue is that while CAR-T therapies have produced unprecedented responses against some forms of hard-to-treat blood cancers, they have also caused a number of deadly side effects, such as cytokine release syndrome and neurotoxicity.

Consequently, Bellicum and ZIOPHARM -- the late-comers to the adoptive cell therapy party -- have both had trouble garnering much interest from investors: Both have been trading at market caps that are small fractions of their respective CAR-T pipelines' commercial potential. Gilead's rather rich buyout of Kite Pharma for what amounts to a 29% premium, however, suggests that the top players in the industry have faith in the power of this novel anti-cancer fighting platform.

By acquiring Kite, Gilead may have gained a significant new source of revenue with the potential to help offset its declining hep C franchise. EvaluatePharma, for instance, forecasts Axi-Cel's sales will top $1.7 billion by 2022, and thinks it will turn out to be one of the top-selling oncology products over the course of the next decade. Even so, this acquisition isn't quite enough to move the needle from a top-line standpoint. Sales of Gilead's hep C line are expected to nosedive in the next two to three years due to the emergence of a game-changing competing treatment from AbbVie.

Based on that, Gilead might be gearing up to acquire additional assets in the CAR-T space to shore up revenues. The biotech, after all, will have another $24 billion or so in cash remaining following this acquisition, and at their current rock-bottom valuations, Bellicum, Juno, and ZIOPHARM may prove too attractive to pass up. Stay tuned.