Believe it or not, there are still value stocks to be found in a market that seems to reach new all-time highs nearly every day. Finding those much-desired companies that combine a low valuation with reasonable growth prospects is tricky -- and even more so if you're also looking for those that are solid enough to put in a conservative retiree's portfolio. But it can be done.

To help you in your search for those rare equities, we asked three of our Foolish investors to pick one that they felt fit the bill as a value stock well suited for retirees, and to explain their investing thesis. They came up with Gilead Sciences (NASDAQ:GILD), General Motors (NYSE:GM), and American Outdoor Brands (NASDAQ:SWBI). 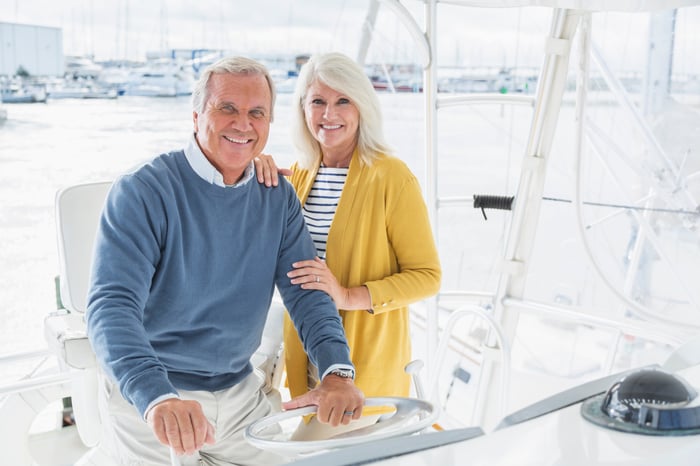 George Budwell (Gilead Sciences): Gilead Sciences has slowly been shrugging off its long-term downtrend in the past few weeks, thanks to a better-than-expected second-quarter earnings report. Even though the biotech's shares were up by 1.9% for the year at the time of writing, however, its stock remains at historic lows from a valuation standpoint, and is currently among the cheapest within its peer group at with a price-to-earnings ratio of 7.72.

Putting aside the double-digit sales growth in the biotech's HIV treatment segment, and a diverse clinical pipeline that sports compelling candidates in high-value areas such as rheumatoid arthritis, Gilead's stock is arguably a great value buy for any investor right now simply because of its immense cash position. At the end of Q2, for instance, it had cash, cash equivalents, and marketable securities of approximately $36.6 billion.

That's a cash stockpile -- when excluding foreign profits permanently invested overseas -- that's only really rivaled by fellow biopharmas Amgen and Johnson & Johnson. So whenever Gilead's management decides to pull the trigger on a bolt-on acquisition, they will have plenty of dry powder, and therefore won't be forced to fight over small to mid-sized targets with a far broader field of would-be suitors.

All told, Gilead's rock-bottom valuation doesn't seem to reflect its enormous potential to create value through M&A, especially since this biotech is extremely well-positioned to make a game-changing acquisition soon.

Tim Green (General Motors):  At first glance, automaker GM may not seem like a stock well suited for retirees. It operates in a capital-intensive, cyclical industry prone to major swings in demand, and it has been less than a decade since GM nearly collapsed, and was saved only by a government-backed reorganization. With new vehicle sales in the U.S. declining in recent months, another downturn for the auto industry seems inevitable. On top of that, the development of electric and self-driving cars promises to upend the industry in the coming decade.

But GM is not the company it used to be. Its balance sheet is strong, with the automotive business sporting $20.5 billion in cash and marketable securities and just $11 billion of debt. Its focus is no longer on being the biggest car company in the world, but rather on producing profits. GM has exited various unprofitable markets over the past few years, including Europe, giving up volume in pursuit of higher margins.

The company is also not ignoring the shifting tides in the industry. Its Chevy Bolt, a mainstream electric car, beat Tesla's Model 3 to market, and Cruise, GM's autonomous vehicle subsidiary, is testing a self-driving Uber-like service in San Francisco.

GM's profits will almost certainly decline as U.S. auto sales slump, but there's a lot to like about the stock for retirees looking to buy and hold. With GM expected to produce adjusted earnings per share of between $6.00 and $6.50 this year, the stock is trades for a scant 6 times earnings. Earnings may peak this year, so the stock isn't as cheap as it looks. But the market seems to be pricing in more pessimism than is warranted.

Though its dividend yield is currently a high 4.3%, given that it can be covered with just 25% of earnings at the low end of GM's guidance, it's also sustainable. The payout therefore should be able to survive a wide variety of scenarios, even a fairly steep auto market downturn. For retirees who can accept the fact that GM's earnings aren't going to march higher in a predictable fashion, this value stock is a fine choice.

Get some bang for your retirement buck

Priced at a mere 8.75 times earnings today, American Outdoor Brands (you may be more familiar with it by its "old" name -- Smith & Wesson -- is trading at just a fraction of the 24.7 average P/E of S&P 500 stocks. Amazingly, though, while analysts forecast less than a 10% long-term average earnings growth rate for the average S&P stock, American Outdoor Brands  is expected to grow its earnings at a nearly 14% annualized rate over the next five years.

Why the big disconnect between American Outdoor Brands' P/E and its forecast growth rate? Partly, I think it's a function of political correctness. Many people view gun stocks as "bad" -- "socially responsible" investors in particular -- and so avoid investing in companies like American Outdoor Brands on principle. More practically minded investors may also be leery of American Outdoor Brands stock because, with three-and-a-half more years of a Donald Trump presidency ahead of them, the prospect of gun-sales-inducing move to restrict gun ownership seem pretty remote right now.

Be that as it may, folks investing for a long retirement can afford to wait out such short-term wobbles in the gun market. By the time gun sales start spiking again, American Outdoor Brands stock probably won't be as cheap to own as it is today. The time to buy it, therefore, is now.