Started as a Chinese social network that replicated many of Twitter's functions and features, Weibo (NASDAQ:WB) has since surpassed its American counterpart in key metrics including active users and net income. The chart below outlines the company's sales and earnings growth over the last three years and gives a good snapshot of how far the social platform has come in a relatively short period of time. 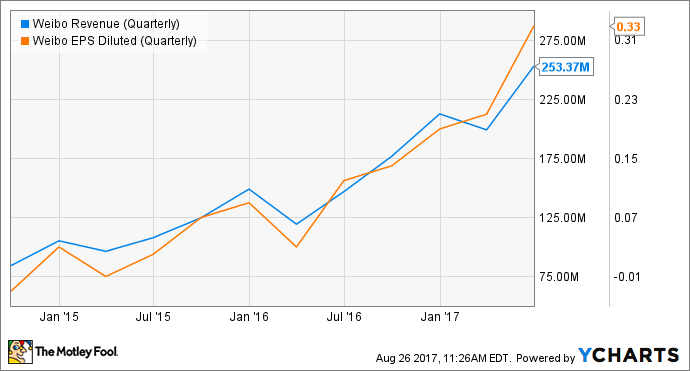 Quarterly sales are up roughly 200% over the three-year period, while earnings per share have skyrocketed 1,000%, and shares have climbed roughly 140% this year alone. Those are great results, but for shareholders and those considering investing in Weibo, it's also advisable to take a deeper look at the company's growth story.

Read on for a look at three quotes that put Weibo's growth in context and give an indication of where the company might be heading. (Transcript from the company's most recent earnings call is courtesy of S&P Global Market Intelligence.)

Last quarter, Weibo's net income climbed 144% to reach $86.7 million -- a record for the company. Here's CFO Cheng-Chun Yu breaking down some of the key results from the June-ended quarter and explaining how such strong profitability was generated:

Weibo's traffic remains robust with an addition of 79 million MAUs [monthly active users] and 33 million average DAUs [daily active users] in the month of June from the same period last year. Total revenues grew 72% year-over-year in the second quarter, which is an acceleration from Q1, and adjusted EBITDA margin reached an impressive 41%, up 15 points from last year. Weibo's strong profit margin is contributed by two key factors: we have formed strategic cooperation with key domestic smartphone manufacturers and enabled them to leverage Weibo as a CRM [customer relationship management] and social marketing platform, which in turn help us more effectively penetrate lower-tier cities; our unique content ecosystem enables content creators to build a fan base on Weibo and monetize from their social assets, which saves Weibo content cost.

Having its app embedded on domestically made smartphones is allowing Weibo to grow with the Chinese mobile market and opening up big service-related opportunities down the line. Yu stated that as the company's platform continues to mature, the company sees a potential opportunity to offer revenue sharing for content creators -- a dynamic that could move the company into the role of providing a leading, YouTube-like service for the Chinese market. 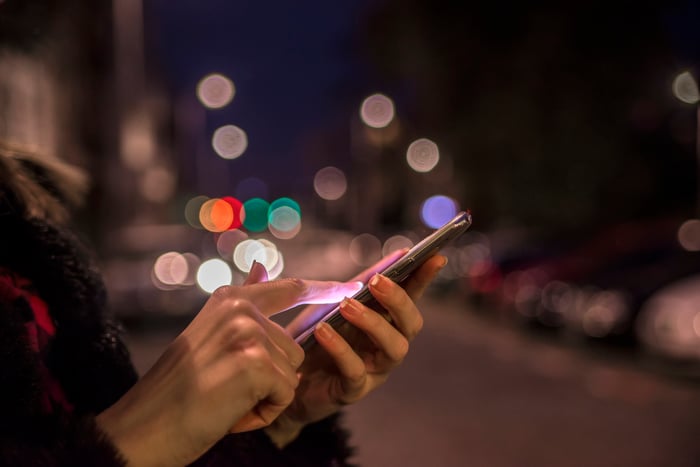 2. Video is the next big frontier for Weibo

Video business accounted for roughly 18% of Weibo's revenue last quarter, and that contribution is on track to grow substantially going forward. The company expects video to replace photos as the preferred visual medium for social sharing, and it's forging partnerships, investing in content, and improving its delivery technology in order to build a leading position in the space. Here's CEO Gaofei Wang with an update on the company's progress in the video category:

On the multimedia front, both video views and content creation have continued to grow rapidly. In June, daily video views grew 159% year-over-year and 90% quarter-over-quarter mainly from two drivers. One, on video content creation, with our focus to expand content verticalization and increasing the number of top content creators partnering with MCNs [multi-channel networks] to create content, we are seeing the breadth and volume of video content on Weibo expanding. In June, the number of videos shared by top content creators increased over 100% year-over-year. In the second quarter, Weibo also launched a video creation platform that equips news media and video MCNs with efficient video editing tools that gives them access to a real library to facilitate content creation. This significantly simplifies the video creation process and enhances the full video production capabilities.

Weibo has partnered with large television channels and content producers, including sports leagues like the NBA and NFL, to bring programs and short videos to its social network. The combination of Weibo's social network and premium and user-generated video content looks promising and presents avenues to continued user growth and improved engagement.

The company is also successfully using machine learning to drive results on its video platform. Improved targeting helped drive a nearly fourfold year-over-year increase in views on recommended-video timelines, and management expects that it can continue to increase engagement by matching content to user tastes.

3. Ad sales have room to run

Weibo is likely to enjoy substantial tailwinds as its user base grows and advertising budgets continue to migrate to mobile. Roughly 92% of the company's monthly active users were on mobile platforms last quarter, and expectations for strong user growth in China's developing cities and improved targeting efficiency suggest the company will be able to continue to soak up ad spending and deliver impressive top- and bottom-line growth. Wang explained Weibo's growth opportunities in the smaller cities of China's tier system:

So we focus on our user growth mainly coming from third-and-fourth-tier cities. With regards to third-tier cities, [we] probably have grown to -- penetration rate growth equivalent to 30% of Tier 2 cities and then with regards to Tier 4 cities, our penetration rate is still very low. So we think that there is still great opportunities coming from Tier 3 and Tier 4 cities.

Take a look at the graph below to get a sense of MAU growth over the last eight quarters. 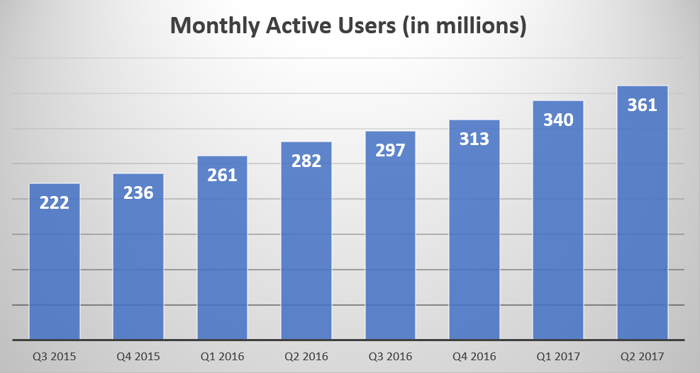 The Chinese Internet Network Information Center reported that the country had 731 million internet users at the end of 2016, so, while Weibo's current penetration is already impressive, it still has considerable room for expansion, particularly in fast-growing Tier 3 and Tier 4 cities.

The company plans to keep spending on marketing in order to acquire new users. However, it does not expect any significant increase in advertising expenses as a percentage of revenue -- good news for investors as it suggests the company will continue to deliver impressive margins. Weibo also anticipates launching a new ad system that will drive engagement and monetization gains for advertisers by the end of the current quarter.

Taken as a whole, there are a range of promising growth drivers for its business, and Weibo looks to be in good shape going forward.