After a much-delayed start, chip giant Intel (NASDAQ:INTC) is finally expected to go into mass production on the very first chip family built using its new 10nm manufacturing technology, known as Cannon Lake, at some point in the second half of this year.

Intel CEO Brian Krzanich indicated on the company's July 27 earnings call that the Cannon Lake chips will quality for production by the end of the year, and that investors and customers alike should expect those chips to "start to ship in the first half" of 2018. 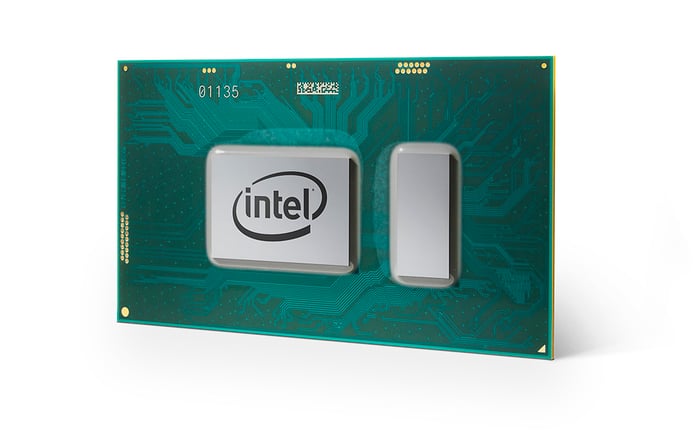 Here are three things investors need to know about these upcoming chips.

At this point, it is well known among those who follow the various leaks that Intel only intends to bring Cannon Lake-based processors to a subset of the personal computer market.

Intel is only planning to introduce so-called "Y"-series parts, which are very low-power chips suitable for computers like Apple's (NASDAQ:AAPL) 12-inch MacBook, and some "U"-series parts aimed at thin-and-light mainstream notebooks.

Intel has said that it plans to bring into production three variants of its 10nm technology: 10nm, 10nm+, and 10nm++. The Cannon Lake chips are expected to be built using the company's first-generation 10nm technology, known simply as 10nm.

Per Intel, its first-generation 10nm technology should deliver a more than doubling of transistor density over the various 14nm technologies that are used to build most of Intel's products today.

This means that, in theory, Intel should be able to stuff many more features and much more functionality into the Cannon Lake parts compared to their direct 14nm-based predecessors.

Additionally, Intel says that transistor performance (this influences power consumption and chip performance) for its 10nm technology should be slightly ahead of the performance of its second-generation 14nm technology, known as 14nm+, though not quite as good as the 14nm++ technology that'll be used to build the Coffee Lake chips.

Intel also claims that all three variants of its 10nm technology will offer lower dynamic capacitance than all the 14nm variants, which the company says will translate into lower power consumption.

Intel has been using the same Skylake architecture for several years now. Intel's Kaby Lake, Kaby Lake Refresh, and Coffee Lake chips all use the same CPU cores and graphics processors that first debuted in the 2015 Skylake architecture, though manufacturing and implementation improvements have driven performance up.

With Cannon Lake, that will no longer be the case. Cannon Lake should have improved CPU and graphics processors compared to the ones in Skylake and its numerous derivatives, as well as support for newer, more efficient memory technologies like LPDDR4.

These enhancements should help boost performance, power, and battery life.