Square (NYSE:SQ) is often compared to PayPal (NASDAQ:PYPL) because it's doing for small businesses what PayPal did for online sellers 15 years ago. And based on the success of PayPal, one might think it's a no-brainer to buy up shares of Square right now and enjoy the ride. But while PayPal's already done it, turning into a cash-flow machine, Square isn't much but a lot of potential right now.

Both companies are seeking to expand their offerings right now to further establish a foothold in their respective niches. PayPal is partnering with loads of new online marketplaces and payments companies following its spinoff from eBay, and Square is working to develop new services for merchants to lock them into its ecosystem.

Investors looking to invest in the payments industry could do well with either stock, but which one makes a better buy? Let's take a closer look to figure it out. 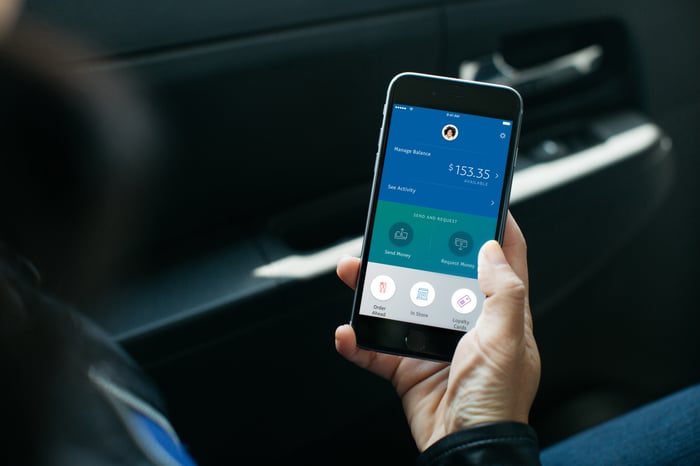 PayPal continues to grow revenue at a strong pace. Last quarter, the company grew its top line 18% year over year. The company expects 16% to 17% revenue per year through 2019. It raised its guidance for 2017 to 18% to 19% with the release of its second-quarter results.

But that revenue growth is coming at the cost of taking a smaller share of total payment volume. Indeed, management expects total payment volume to grow in the mid-20% range. PayPal's take rate fell to 2.95% in the second quarter, down from 3.07% last year. That number ought to keep moving lower as PayPal prioritizes the top line over the bottom line. By comparison, Square's take rate is essentially flat even as it adds more large merchants, which typically demand better rates.

PayPal's operating margin contracted to 13.7% from 14% in the second quarter. Free cash flow margin is facing similar pressure, putting a damper on free cash flow growth. Top-line growth is fueling bottom-line growth for now, but PayPal will eventually have to work on bringing its margins back up. 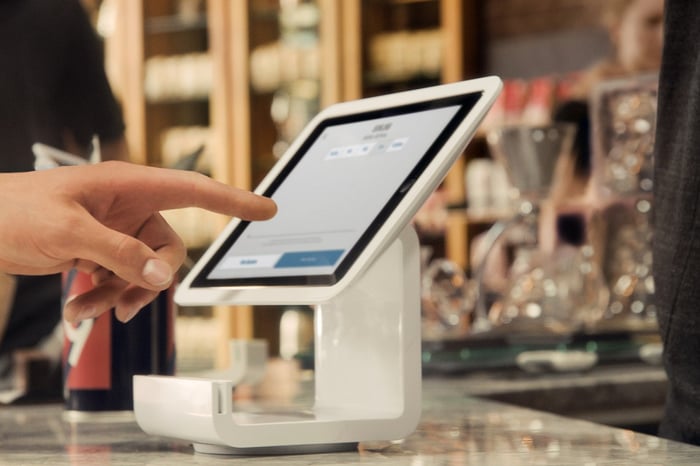 Friar guided for mid-single-digit adjusted EBITDA margin expansion over the next few years. Square appears to be completely in control of that margin as it's still  nvesting heavily in marketing.

The company expanded to Europe earlier this year, where it competes with PayPal and other local companies for in-store payment processing. It's also working to process online payments, moving into PayPal's territory.

Indeed, Square has lots of growth avenues, but its profit growth will come from upselling additional services like Square Capital, its business loan service, invoicing, and instant payments. These services are also essential to keep merchants from switching payment processors.

PayPal has 17 million merchants on its platform. Square doesn't disclose its number of merchants, but it numbers in the millions, according to its quarterly letter to shareholders. But PayPal's head start in the digital payments space has made it a dominant force in the industry. As it partners with more and more marketplaces, PayPal is poised to capitalize on the rapid growth of e-commerce. Its 17 million merchants gives it some insulation from the competition.

While Square is the leader in in-store payments for small and medium-sized business in the U.S., it's playing from behind in other parts of the world and online. It lacks a real moat, as it's only protection against switching costs is upselling its merchants on other services.

The valuation on Square has gotten a bit out of hand with its price-to-sales ratio climbing to 4.75 from 2.61 a year ago. PayPal's valuation has also climbed significantly during the same period, but not nearly to the same extent as Square's. Its P/S ratio is 6.31, up from 4.57 a year ago. Considering PayPal's profitable and Square is still making losses, it makes sense that its sales are valued higher despite a slower growth rate.

While it's not cheaper than Square, PayPal stock presents better value based on its moat and profitability. That makes it a better buy than Square.