E-commerce platform company Shopify (NYSE:SHOP) has an amazing growth story. Since 2012, the company has grown its customer base 12 times and its revenues 21 times, which has powered its stock to over 300% gains since its IPO. While the company has some aspects of its business in common with Amazon (NASDAQ:AMZN), now it seems to have one more: the flywheel. Read on for details about how Shopify's business is creating a virtuous cycle that powers its growth for the long term. 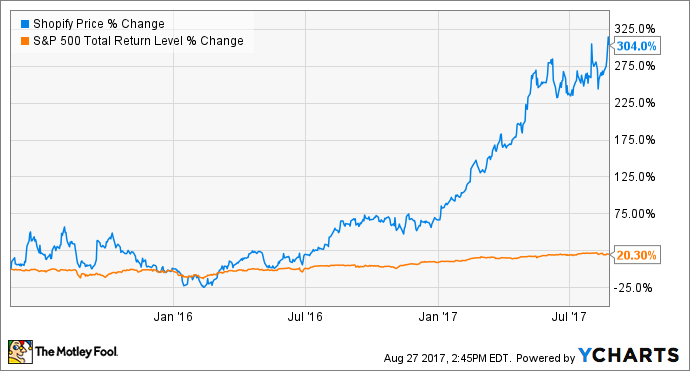 Amazon has had a long successful growth story from being known as "Earth's Biggest Bookstore" in the early days to becoming The Everything Store. The Amazon flywheel (as shown below) was developed with the help of author Jim Collins, as part of a company executive leadership team retreat in 2001. The company has been using this graphic ever since to describe how Amazon's business is able to grow.

The outer loop is a lower cost structure. This results when more customers buy more goods and Amazon can spread out its fixed costs over more orders, thus lowering cost per order. Instead of taking profits, Amazon lowers prices. Improve any part of the circle and the flywheel spins faster. 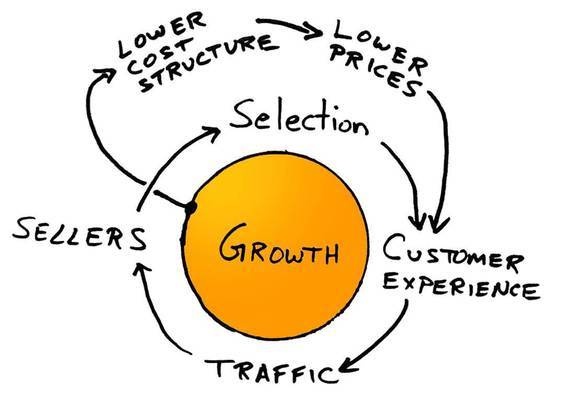 This is a proven model that has grown Amazon into the largest online seller in the world. Shopify has big dreams too. It wants to be the platform of choice that entrepreneurs use to power their e-commerce business and it seem to have taken inspiration from Amazon's flywheel.

Shopify just released its earnings and put up record revenue, record gross margin dollars, all supported by a record number of merchants on the platform. Below is a slide that was included as part of Shopify's quarterly earnings release which has a lot in common with Amazon's flywheel. 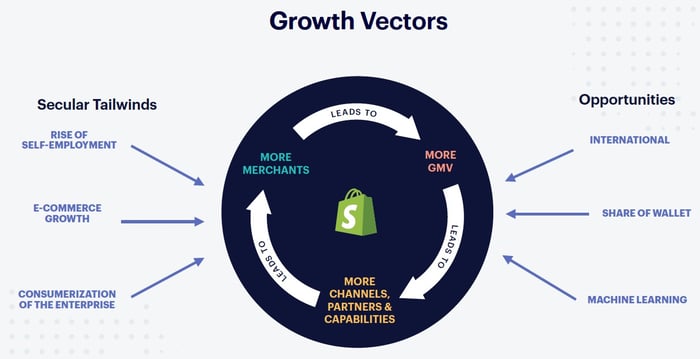 Tailwinds get merchants to the platform

The tailwinds indicated above are trends that support people becoming entrepreneurs in the first place. A Fast Company article points to enablers such as online marketplaces that match talent with work and more coworking spaces as fueling the trend of self-employment. The e-commerce tailwind is a powerful one and still just getting started even though it has been in growth mode for the last two decades.

Lastly, consumerization of the enterprise is the combination of higher expectations of enterprise software driven by the multitude of powerful, easy-to-use smartphone apps that are readily accessible to the general consumer. Shopify understands this trend and has been focused on creating a platform that is easy to use for most merchants.

Once a new merchant is added to the Shopify platform -- as represented by the circle in the middle -- the flywheel gets a little more energy to spin just a little faster.

Recently Shopify surpassed an amazing 500,000 merchants on its platform, but Shopify doesn't like to focus on its number of merchants, it likes to point to monthly recurring revenue (MRR) as its measure of success. MRR refers to the amount spent by merchants on a monthly basis to be part of the Shopify platform and that has grown at 80% compound annual growth rate (CAGR) since 2012. 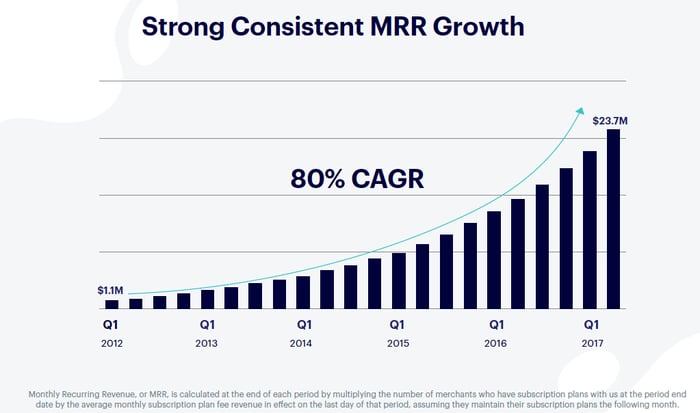 Having more merchants selling their goods on the platform creates more gross merchandise volume (GMV), which represents sales made on the platform. This number has been on a tremendous growth path as well. 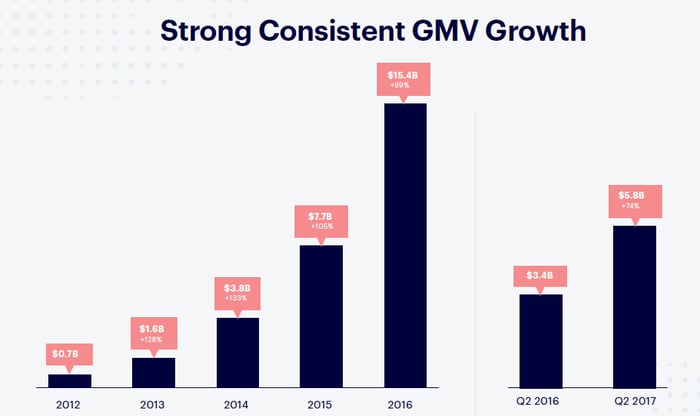 Having more merchants sell more stuff on the platform in turn leads to more channels, partners, and capabilities.

Over the years, Shopify has built an impressive set of channels for its merchants to be able to sell through. For as little as $9 per month, a Shopify Lite subscription allows merchants to set up a "buy button" to sell their product on thousands of websites. With a higher priced subscription plan, Shopify merchants can sell on Amazon, Pinterest, Facebook, their own custom website, and coming soon, eBay.

Shopify has attracted a number of partners to help build out its platform. A partner can sign on to be an app developer, a Shopify "expert" or a theme store designer. All of these partnerships expand the capabilities of the platform and make it more valuable for individual merchants.

Lastly, having more merchants allows Shopify to deliver more capabilities. Shopify's credit card reader is a great example of something that the company was able to bring to its platform now that the company has a huge base of merchants who will benefit from the addition.

Viable for the long term

Lastly, one of the keys to Amazon's success is that instead of driving profits, the company utilizes its operating leverage to lower prices for its customers further accelerating the flywheel. Tobi Lutke, Shopify's CEO, seems to have learned this lesson from Amazon as well. Here's what Lutke said in the filing to go public in 2015.

Instead of... carving out the profits for ourselves, we've made a point of supporting our partners and aligning their interests with our own. In order to build long-term value, we decided to forgo short-term revenue opportunities and nurture the people who were putting their trust in Shopify... Shopify has been about empowering merchants since it was founded, and we have always prioritized long-term value over short- term revenue opportunities. We don't see this changing.

Shopify seems to have a lot in common with the proven growth story of Amazon and that should make Shopify investors pretty happy.