Though it attracts its share of detractors, the evidence is beyond dispute: Amazon.com (NASDAQ:AMZN) is one of the most extraordinary companies in business today, perhaps even the greatest of its time. 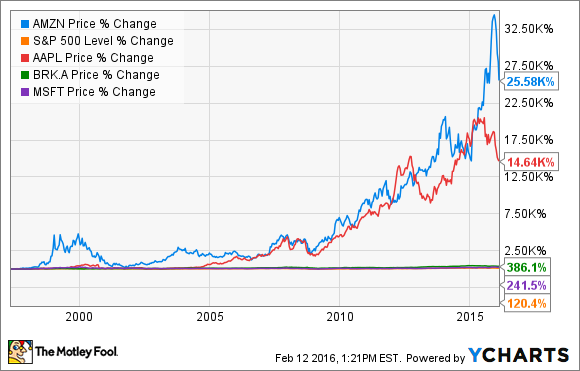 Since its May 1997 IPO, Amazon's stock has trounced many of the companies whose names also surface in discussions of long-run corporate excellence. Share-price performances largely reflect specific winning strategies and traits that allow a select few companies to flourish, while most wilt. So understanding the strategies that drive winning companies can help aid investors in their search for new holdings. Keeping that in mind, let's examine the trait that has led to Amazon's outsized success over the past two decades.

Inside Amazon's secret weapon
Like many of the great companies throughout history, Amazon's operations strategy is guided by a handful of defining core principles, perhaps the best known of which is to "focus relentlessly on our customers." To achieve this goal, Amazon borrowed a strategic framework called the "flywheel" from strategy guru Jim Collins. Here's a rough sketch of how the flywheel concept works. 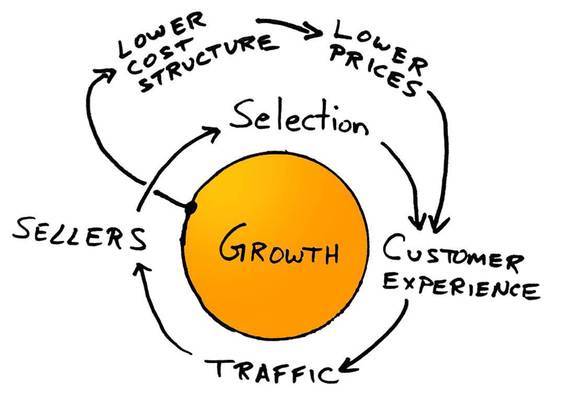 This concept, while not unique to Amazon, is the key to understanding how the e-commerce giant guides its operations. In his best-selling book The Everything Store, which I highly recommend, author Brad Stone summarizes Amazon's application of the flywheel strategy:

[L]ower prices led to more customer visits. More customers increased the volume of sales and attracted more commission-paying third-party sellers to the site. That allowed Amazon to get more out of fixed costs like the fulfillment centers and the servers needed to run the website. This greater efficiency then enabled it to lower prices further. Feed any part of this flywheel, they reasoned, and it should accelerate the loop.

A flywheel at standstill requires a substantial amount of effort to begin spinning. However, once in motion, the flywheel begins to develop a momentum of its own, which makes it increasingly easy to spin. This same idea of momentum applies to the business analogy as well. Each improvement Amazon's employees make to fuel the flywheel helps accelerate the company's cycle of growth. 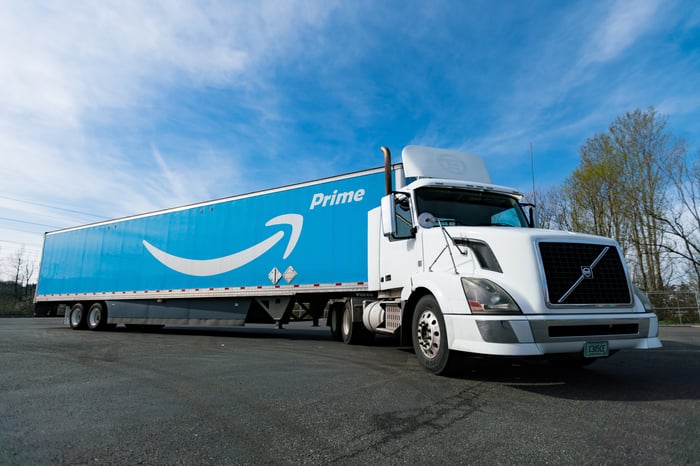 Equally important, the flywheel concept is enduring. As Jeff Bezos himself has noted, the technologies and services that Amazon provides might change over the course of several decades, but the core tenets, such as low prices, embedded in the flywheel framework should consistently resonate with Amazon's customers, regardless of the circumstance.

No signs of letting up
Fortunately for Amazon and its shareholders, all signs show that the company remains as focused as ever on finding new ways to spin its flywheel.

In what could be the most exciting news to come out of the e-commerce giant in some time, word recently surfaced that Amazon has considered creating its own global logistics service, apparently under the name Global Supply Chain by Amazon. Leaked documents show that discussions of the service have reached the upper ranks of Amazon's management. If it happens, it would also serve as a perfect application of Amazon's long-term flywheel strategy.

With global e-commerce still in its relative infancy, Amazon understands that a key component of its global fulfillment will involve shipping goods produced in countries such as India and China to the rest of the world. So the company that can create a responsive and highly efficient means of sourcing items from producers to consumers should gain a long-term cost advantage over the competition. And as it has done so with third-party sellers on its website and AWS, Amazon can in theory create a way of subsidizing its own global supply chain infrastructure by allowing third parties to pay for Amazon to also fulfill their orders.

Of course, this service would require a tremendous amount of investment and effort on Amazon's part. However, with one sell-side analyst estimating that Global Supply Chain by Amazon could produce revenues of roughly $400 billion for the company, the risk could well be worth it.

Ideas like these show that Amazon remains as committed as ever to accelerating its flywheel, a fact that positions the company to succeed for years to come.