When news broke last year that thousands of Wells Fargo (NYSE:WFC) employees opened 2 million checking and credit card accounts for customers without the customers' authorization to do so, the bank's former CEO, John Stumpf, claimed that the scandal wouldn't have a material impact on Wells Fargo's financial performance.

He was basing this view, it seemed, on the $185 million in fines that the nation's third biggest bank forked over to regulators on account of the scandal. That's a lot of money, but it's a fraction of Wells Fargo's quarterly earnings, which regularly top $5.5 billion. But as time has progressed, it's become clear that Stumpf was wrong, and that he had underestimated the impact the scandal would have on the 165-year-old bank.

There have been higher legal fees, for instance, in response to lawsuits filed against the bank as a result of the scandal. And it seems safe to assume that Wells Fargo's revenue will no longer grow as fast as it used to, supercharged as it was by a cross-selling strategy that the bank has since put on ice.

But the biggest impact has been on the performance of its stock, which has been very much materially affected. You can see it by comparing a chart of Wells Fargo's one-year return to the three other multitrillion-dollar banks: JPMorgan Chase (NYSE:JPM), Bank of America (NYSE:BAC), and Citigroup (NYSE:C). 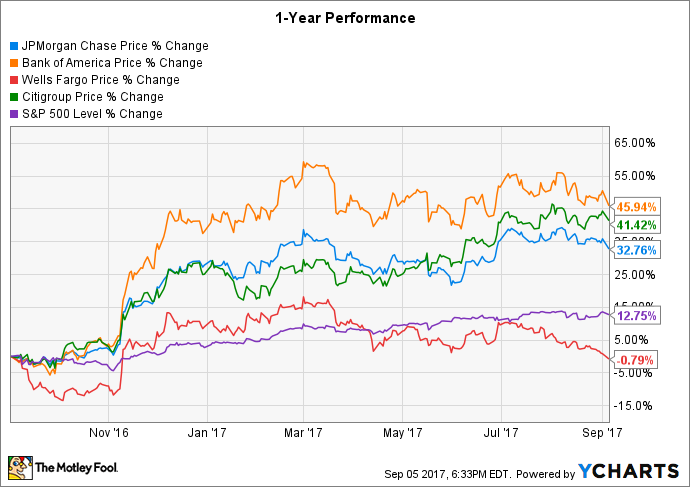 JPMorgan Chase, Bank of America, and Citigroup have left Wells Fargo in the dust over the past year. That's significant, because it means that Wells Fargo lost out on the post-presidential election rally, which sent bank stocks soaring.

It was on hopes of tax cuts and regulatory reform that shares of Bank of America have climbed 46% over the past 12 months. Meanwhile, Citigroup's shares are up 41%, while JPMorgan Chase's share price has climbed 33%.

Wells Fargo is the only one that has seen its stock drop, losing nearly 1% since this time last year.

It's here, in turn, where one can measure the impact of Wells Fargo's sales scandal. Had its shares increased by 40%, which is the average of these three other banks, the rally would have added nearly $100 billion in market value to the California-based bank.

That's a lot of money -- so much so that it's most certainly material to Wells Fargo shareholders.