Redfin (NASDAQ:RDFN) has been one of this year's hottest IPOs, and on Thursday, it had its first chance to earn those gains with its first quarterly report as a public company. It was a strong showing, but this doesn't mean that a strong start is a surprise.

Revenue climbed 35% to $104.9 million for the second quarter, and net income more than tripled to $4.3 million or $0.06 a share. Anyone thumbing through Redfin's prospectus this summer -- coming out shortly after the fiscal period came to a close -- would've seen the next-gen real estate brokerage offer preliminary results for the quarter. It was targeting $104.5 million to $104.9 million in revenue for the three months ending in June. It was eyeing a profit of $3.7 million to $4.3 million.

It's probably not a coincidence that Redfin landed at the high end of both ranges. The debutante gets it. If you're going to put out guidance for a quarter that already ended, you better make sure you already landed at the high end. You don't want to disappoint investors in your first quarterly report after an IPO, since you never get a second chance to make a first impression. 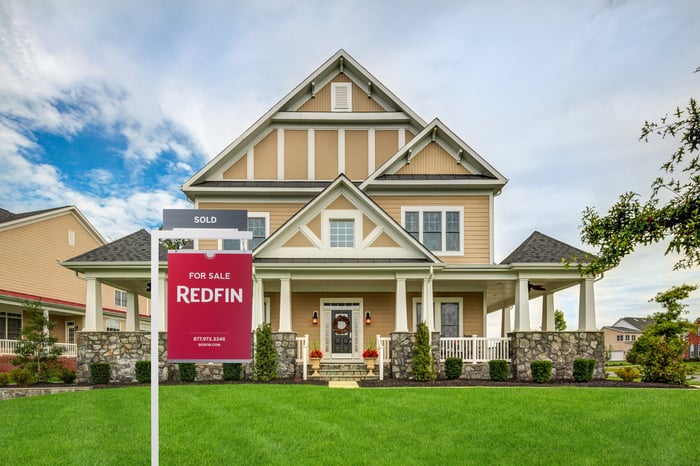 Laying out the welcome mat

Redfin went public at $15 in late July, and it was already trading 69% higher as of Thursday's close. The unique model where it hires agents working on salaries instead of traditional commission schedules has made it a hot target for homebuyers and sellers alike that are drawn to the lower commissions. Redfin claims it saved customers more than $36 million in fees during the quarter.

The disruptive agency keeps gaining market share. It accounted for 0.64% of the value of existing home sales during the quarter, up from 0.53% a year earlier and 0.54% during the first quarter of this year. Armed with access to raise capital through equity offerings and greater brand awareness following this summer's IPO, it's fair to say that Redfin's market share will continue to grow.

The July prospectus had already told us that Redfin drew an average of 24.4 million monthly visitors during the quarter, 43% ahead of the prior year. The one thing we didn't know at the time of the IPO was Redfin's guidance for the third quarter, and the news is encouraging on that front.

Redfin sees $108.5 million to $110.5 million in revenue for the current quarter, in line with the second quarter's 35% spurt. Analysts were only forecasting $107.1 million on the top line. The $10 million to $10.8 million in net income that it's modeling is just ahead of the $0.10 a share that Wall Street pros were targeting.

Several of the companies that helped take Redfin public in late July issued neutral analyst ratings four weeks later. The stock's big run made the ho-hum calls understandable, but with the stock trading near those levels and a strong initial quarterly report, it seems as if Redfin and its shareholders are getting the last laugh.