The chairman and CEO of Goldman Sachs (NYSE:GS), Lloyd Blankfein, added his voice to a chorus of high-profile financiers that have expressed concern about the current state of the markets.

"Things have been going up for too long," he said. "When yields on corporate bonds are lower than dividends on stocks? That unnerves me." To be clear, the head of Goldman Sachs thinks stocks are too high right now. That's a pretty credible source.

Beyond the inverted relationship between corporate bond yields and dividend yields on stocks, Blankfein is almost certainly also perplexed by the valuation of stocks in an absolute sense. 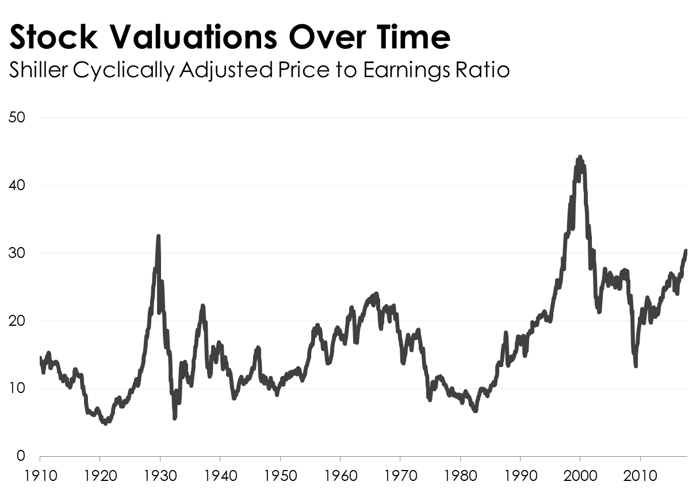 This is a chart of the Shiller CAPE ratio, the valuation metric one uses to put current valuations into historical context. It is not a perfect approximation, but it's the only credible one that's publicly available, as far as I'm aware.

What this shows us is that large-cap stocks have traded at a higher multiple to earnings only two other times in the past: 1929 and 1999. The former, you might remember, precipitated the Great Depression, while the latter marked the height of the internet bubble.

Buffett has pointed out that one reason stock valuations are so high is because interest rates are low – these two things being inversely correlated.

That's true. But whether it's higher interest rates that deflate stock valuations or something else, there's no getting around the fact that the Shiller CAPE ratio is at its third highest point on record.

Where stock valuations are at right now make this second chart so interesting. 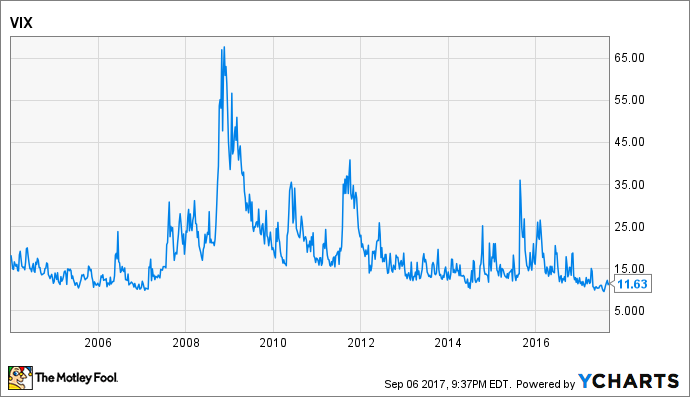 This is a chart of the VIX, an index that measures expected volatility of the S&P 500 over the next 30 days.

The VIX has closed on the average day over the past quarter century at a little under 20.0. It has occasionally shot beyond 40, and through the most acute period of the financial crisis, it pierced 80.

Interestingly, the VIX is at an equally extreme level right now. Though the issue isn't that traders expect a lot of volatility; it's that they don't seem to expect any at all.

The VIX has flirted with 10.0 for most of the year.

It has only closed below that on 27 out of the past 6,975 trading days. And nearly three-quarters of those days (19 of them) have come this year.

What's going on there? Nobody knows.