If you have a desire to be a millionaire someday -- I mean, come on, you're reading about investing. Of course, you're interested -- then one of the best ways to get there is to invest in great companies that can generate high rates of return over time and compound your wealth over decades. There are a lot of stocks out there, but not all of them are going to fit that specific description.

So we asked three of our contributing investors to highlight stocks they see as having the potential to be wealth-compounding machines over time. Here's what they had to say about Ambarella (NASDAQ:AMBA), Gilead Sciences (NASDAQ:GILD), and American Tower (NYSE:AMT). Tim Green (Ambarella): Shares of video compression and image processing semiconductor developer Ambarella took a tumble on Sept. 1 following the company's second-quarter results. The numbers looked fine, but Ambarella slashed its full-year outlook, calling for a 3% to 7% revenue decline. Weak drone sales, slow growth in the virtual reality market, and a shortage of memory components all contributed to the guidance cut. 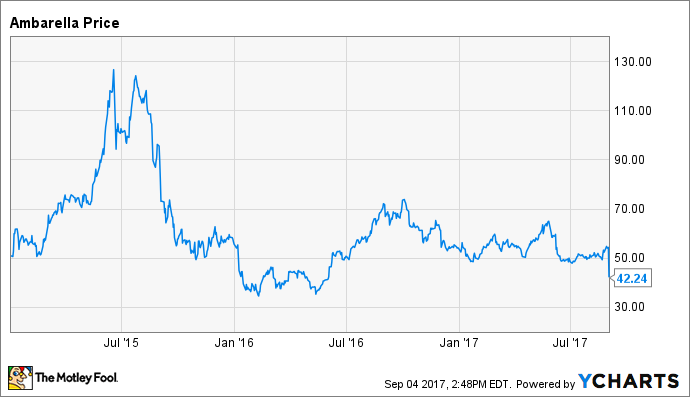 Ambarella stock has crashed since peaking in mid-2015, down 66% from that high. Revenue slumped in fiscal 2017, so the new outlook means that Ambarella will post a second consecutive annual revenue decline. Many of Ambarella's target markets, like drones and virtual reality, are still in their infancy, so fits and starts shouldn't be unexpected.

Now trading for around $42 per share, Ambarella stock trades for about 25 times earnings, or 17 times earnings after backing out the $400 million of net cash on the balance sheet. It's not priced for much growth at all, but there's still plenty of long-term growth potential. Beyond drones and virtual reality, the company is working on a computer vision system-on-a-chip aimed at the automotive and robotics markets.

With hundreds of millions of dollars in excess cash, and with still-high profit margins despite slumping revenue, Ambarella has plenty of time to turn things around. As we march toward self-driving cars, Ambarella is positioning itself to be a major player in what will likely be an enormous market.

A big splurge that could lead to big gains

Cory Renauer (Gilead Sciences, Inc.): Investors looking for stocks to help them on their path to becoming millionaires should consider this longtime leader in the antiviral space. A big acquisition in 2012 laid the foundation for a hepatitis C franchise that made this one of the most profitable companies on the planet, and the upcoming purchase of Kite Pharma could help it continue to deliver buckets of cash to shareholders in the form of share buybacks and a dividend that currently offers a nice 2.4% yield at recent prices.

The $11.9 billion Gilead intends to spend acquiring Kite Pharma isn't chump change, but the company finished June with $21.1 billion in cash and marketable securities. An all-cash transaction would leave Gilead with plenty of cash to maintain its dividend and continue repurchasing enough shares to significantly increase the slice of future profits its shareholders are entitled to, even if Kite's cell-based cancer therapies turn out to be a total dud.

Given the clinical trial results underpinning a new drug application for Kite Pharma's lead candidate, which the Food and Drug Administration is currently reviewing, I'd say there's a solid chance Gilead can squeeze out a return on its investment. Non-Hodgkin lymphomas that keep progressing after exhausting available treatment options are practically a death sentence, but perhaps not for much longer. At a median follow-up of 8.7 months, an eye-popping 39% of patients treated with a single infusion of Kite's candidate, called axi-cel, were in complete remission.

Overcoming the immense logistical challenges involved with withdrawing, shipping, modifying, returning, then reinfusing cells for every patient treated paints a scary question mark on the future of cell-based cancer therapies. Investors will want to keep an eye on a related treatment called Kymriah from Novartis. It recently earned an FDA approval and bears a whopping $475,000 price tag. If Novartis can get clinical trial success to translate into commercial success, it would bode extremely well for Gilead's future as a leader of this exciting new oncology space.

International demand for cellular infrastructure is bigger than you think

Tyler Crowe (American Tower): The appetite for cellular data in North America is almost insatiable. Since 2006, total data traffic in the U.S. has grown at an astounding 92% annually. Those growth rates have coincided with the adoption of faster data speeds, and it's not expected to slow down anytime soon with 5G on the way. Meeting the need for more data will require more equipment deployed on cell towers across the U.S. That alone makes American Tower's more than 40,000 cell towers incredibly valuable property for the next several years, but that is only scratching the surface considering the opportunities American Tower has overseas.

American Tower has been investing heavily in developing its network internationally over the past several years, especially in markets that it considers as either "emerging" or "evolving." These two markets' classifications relate to wireless penetration (how many people have cellphones) and broadband penetration (how many of those phones are capable of accessing the internet). Some of American Tower's greatest opportunities lie in countries where wireless penetration is high (better than 90%), but broadband penetration is less than 70%. These markets look similar to the U.S. a decade ago, and could have the potential for astronomical growth in the coming years. So far, American Tower has deployed more than 100,000 towers in 14 international markets, with a large focus in India, Latin America, and Africa. These international markets have been turning in double-digit growth rates in recent quarters, and there is little reason to think that will slow down soon.

Today, the returns for these international towers is lower than for North America. Over time, though, returns should increase as multiple tenants rent space on the same tower, a strategy that has paid well in North America. Keep in mind that this is just for 14 international markets. As more and more countries fall into that sweet spot of wireless and broadband penetration, expect American Tower to pounce. This could make this specialty REIT an incredible wealth-compounding stock over time.