Brian Stoffel, Rich Duprey, and Matthew Frankel, CFP
(TMFCheesehead)
Author Bio
Brian Stoffel has been a Fool since 2008, and a financial journalist for The Motley Fool since 2010. He tends to follow the investment strategies of Fool co-founder David Gardner, looking for the most innovative companies driving positive change for the future. He also mixes in risk-management strategies he's learned from Nassim Nicholas Taleb. Follow @Brian_Stoffel_
Follow @Brian_Stoffel_

Since hitting a post-IPO low of $18 five years ago, shares of Facebook (NASDAQ:FB) have rallied an impressive 850%. Those are the types of returns that can single-handedly create generational wealth. But while we all look back now and say we saw it coming, few of us actually put our money behind that conviction.

So which stock will be the next Facebook? There's no way to know for sure, but our analysts have pinpointed a few characteristics that helped the company succeed -- and they see those qualities in other stocks as well. 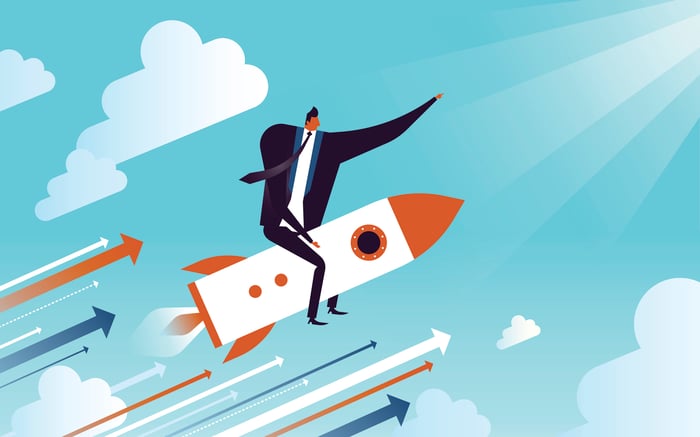 Read on to see why they believe mortgage software-as-a-service (SaaS) provider Ellie Mae (NYSE:ELLI), payment processor Square (NYSE:SQ), and Chemours (NYSE:CC) are all stocks with the potential for Facebook-esque returns.

Matthew Frankel (Square): Payment-processing company Square has grown tremendously. Over the past year alone, the company's gross payment volume has increased by 32%, and revenue is up by 26%. However, there's good reason to believe the company is still in the early stages of its growth story.

As far as Square's core payment-processing business goes, the company's roughly $65 billion annualized transaction volume is still rather low compared to the market opportunity. According to data from the Federal Reserve, payment volume from debit and credit card transactions was about $5.7 trillion in 2015.

What's more, according to The Nilson Report, purchase volume on debit and credit cards is expected to increase by 32.6% and 54%, respectively, during the five-year period from 2016 through 2020.

Keep in mind that these figures only refer to the U.S., and Square already operates in four other countries, having recently launched in the U.K., so there's still a lot of room for international expansion. In all, it is estimated that international card payment volume will reach $45 trillion annually by 2025. Square processes just 0.14% of this amount currently, so it's fair to say that if the company could capture even a percent or two of the worldwide market, it would translate to a lot of growth.

Also bear in mind that Square has other promising ventures that are in even earlier stages of growth, such as its Square Capital business lending program, which has grown by 68% over the past year, or its delivery service for restaurants, Caviar. So while it's impossible for sure to say which companies will be the next Facebook-like growth stories, I think Square has a pretty good shot.

Brian Stoffel (Ellie Mae): One of the advantages Facebook enjoyed during its ride to dominance was the network effect; each incremental user joining a business makes it even more appealing for non-users to join. Think about it -- who would want to join a social network that none of their friends use?

Ellie Mae's Encompass platform, which allows mortgage professionals to track a transaction all the way from lead to closing, also benefits from the network effect: Small banks, appraisers, real estate agents, and even title companies can generate business by having a presence on Encompass. With each new real estate agent that joins, small banks are incentivized to join. It's a virtuous cycle, and one that continues to grow.

But Ellie Mae benefits from another major edge in the form of high switching costs. As Encompass becomes the de facto platform for hundreds of mortgage professionals across the country, few will want to deal with the cost, trouble, and lost time of switching over to another provider. That means that once folks are signed on to Encompass, they're highly likely to stay.

It's worth pointing out that a slowdown in the housing market will negatively impact Ellie Mae, and investors should take their tolerance for volatility into account before purchasing shares. That said, I actually think a slowdown could strengthen Ellie Mae over the long run, as it would drive out potential competition.

In the black by painting it white

Rich Duprey (Chemours): Spun off from DuPont (NYSE:DD) in 2015, Chemours is the world's largest producer of titanium dioxide (TiO2) with an 18% share of the market. TiO2 is considered the whitest stuff on Earth, and it's found in everything from milk and Oreo cookies to undercoating on planes, trains, and automobiles. However, paint is the primary end user of the pigment, because it provides even greater opacity than zinc or lead. Analysts see the global TiO2 market growing at a compounded 9% annual clip, hitting $66.9 billion by 2025.

Chemours has benefited from its ability to raise TiO2 prices several times over the past year as improving industry conditions created a favorable pricing environment. This industry is cyclical, though, and prices will tend to rise and fall over time.

Chemours was dealt a tough hand at its IPO as DuPont saddled it with a lot of debt and toxic assets it no longer wanted to carry, but Chemours responded by cutting expenses, cutting workers, and shedding non-core assets. The price hikes came at an opportune time, too. Because of its smart cost-cutting, Chemours is in a much better position than when it was spun off from DuPont. The TiO2 market may run in cycles, but the moves Chemours has made will enable it to protect itself when the tide eventually turns.

In the meantime, it may just continue its meteoric climb, which has seen its stock more than triple in value in the past year and rise seven-fold from its low point of $6 a share -- an enviable run that even Facebook would admire.