Turn your inflation fears into returns with these stocks.

High inflation rates are making it difficult to come up with a good investing strategy right now. On one hand, stocks are usually considered a great way to hedge against inflation. At the same time, runaway inflation could cause the Fed to raise rates, which would probably result in market volatility or an outright correction. Even worse, inflation won't impact every stock the same way -- some will experience higher costs that they won't be able to pass on to their customers with higher pricing.

The three stocks below don't just offer some resistance to inflation, they also should actually benefit as prices rise across the economy.

Intrepid Potash (IPI 2.13%) is a major producer of potassium salts and related raw materials that are essential inputs in agricultural fertilizers. The company also sells by-products that are used in a variety of agricultural and energy-extraction activities.

Intrepid sits at the far end of the supply chain, and the majority of its sales are domestic. High inflation in the U.S. should cause raw material prices to rise, pushing Intrepid's top line higher regardless of what's going on in other countries. Potash prices fell at the start of the pandemic, hitting their lowest level since 2007. But there's been a double-digit increase for the commodity in recent months, and Intrepid announced a big step-up in prices for multiple products in an August press release. Of course, a number of factors influence supply and demand for agricultural inputs, but inflation appears to have a stimulative impact right now.

Many of Intrepid's costs are fixed (or partly fixed), meaning that higher revenue should fall disproportionately to the bottom line. Depreciation, depletion, and amortization costs are one of the largest portions of the company's expense structure, and these are already set in stone. Intrepid has nearly 500 employees, whose compensation probably won't be adjusted more than once a year. It's also unlikely that wage inflation will keep up with commodity prices. And the company carries some revolving credit liabilities, so interest expenses should be fairly stable. Inflation should improve the company's profitability. 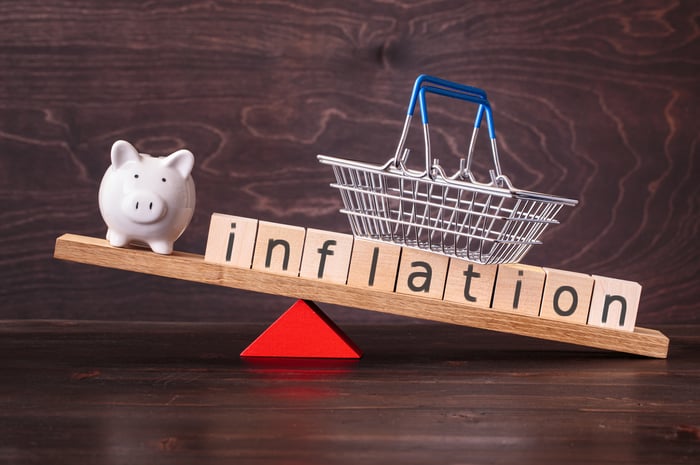 Square (SQ 0.52%) is one of the most promising fintech stocks in the market today, and investors have responded enthusiastically by bidding the price up to very bullish valuations. That's resulted in some volatility this year, as the market struggles to reconcile speculative asset pricing with macroeconomic uncertainty. The Fed raising rates or a prolonged recession probably aren't good news for stocks that have tons of growth already assumed in their price.

Square no doubt carries some volatility risk, but the stock also delivers long-term growth potential along with an attractive inflation narrative for the short term. The company derives a substantial portion of its revenue from transaction services. It charges 10 cents per card transaction processed by its hardware, plus 2.6% of the transaction value. Its CashApp also generates revenue from peer-to-peer transfers or purchases between users. As prices rise for all sorts of goods and services, the value of each transaction processed by Square should also increase. That's going to give a nice little bump to revenue and net cash flows, which should be good for the share price.

The company is even in position to benefit if Bitcoin (BTC 0.51%) appreciates relative to the dollar, which is exactly what many crypto analysts are forecasting. Bitcoin has accounted for 64% of Square's revenue so far this year, which has grown due to rising prices and higher volume on the CashApp. Square only retains 2% of its Bitcoin revenue, incurring a nearly identical cost to purchase the asset for its customers. Bitcoin volatility ultimately shouldn't have a huge impact on Square's net cash flows, but any crypto appreciation driven by inflation should ultimately improve the company's gross profit.

The stock still costs more than 200 times forward earnings, so make sure that you're comfortable speculating before buying. Investors who don't mind some risk could be rewarded handsomely by this innovative disruptor.

Gold's value as an asset class has become a bit divisive among investors in recent years, but no list of inflation hedges seems complete without it. Gold is historically the most famous inflation hedge, with its limited supply, high liquidity, and universal acceptance as a store of value.

There aren't many pure-play gold stocks out there right now, but Royal Gold (RGLD -1.30%) is a mining company that could thrive with inflation. In theory, a depreciating dollar should stimulate demand for gold, which is expected to retain its real value as fiat currency fluctuates. Companies that own gold mines and sell the metal would be among the largest beneficiaries.

For its fiscal year that ended in June 2021, 74% of Royal Gold's revenue was attributable to gold and 10% was attributable to silver. It also produces industrial metals including copper, and those commodities can be considered inflation hedges. The company paid down all of the debt on its balance sheet last year, and increased its annual dividend to $1.20 per share. That 1.2% yield isn't jaw-dropping, but it's sustainable at roughly half of Royal Gold's free cash flow.

Mining companies experience all sorts of worker health, geopolitical, and operational hazards as they manage business functions across multiple continents. Nonetheless, Royal Gold is a nice option to get heavy exposure to gold prices along with its impressive financial health and efficiency ratios.

Square Reaches $120B Market. Are the Best Days Still Ahead?

3 Cathie Wood Stocks That Are Better Than Bitcoin
397%