After a disappointing 2016, smartwatches are attempting to stage a comeback in 2017. With sales in the product category being back-loaded into the busy holiday shopping season, it's about to be crunch time for smartwatch makers, specifically the two dominant players in the U.S.: Fitbit (NYSE:FIT) and Apple (NASDAQ:AAPL). Apple just unveiled its Apple Watch Series 3 this week, and Fitbit announced the Ionic last month, its first foray into official smartwatch territory (the older Blaze doesn't count since it doesn't support third-party apps).

Within the U.S., these two products will be the two main smartwatches competing for consumer attention and dollars. 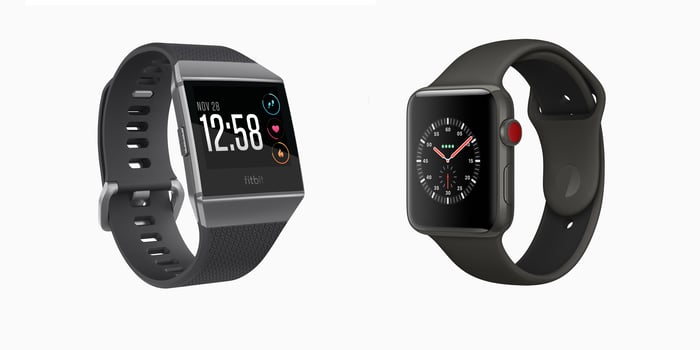 How they stack up

Aesthetic preferences are highly personal, and both devices are extremely customizable with a wide range of accessories, bands, and watch faces. But in terms of features and specs, here's how the Ionic and Apple Watch Series 3 stack up.

Ionic and Apple Watch Series 3 both offer many standard features that are table stakes for any fitness-oriented smartwatch in 2017, such as heart-rate monitoring, GPS, and water resistance. Both Fitbit and Apple offer an array of fitness-related functions like proactive reminders to breathe or to keep moving.

But there are also different areas where one product stands out above the other.

Perhaps the clearest department where the Ionic comes out ahead is battery life, which is critical for wearable devices. Ionic offers over four days of battery life, while Apple Watch Series 3 still must be charged every night. That's also important because longer battery life enables sleep tracking (you can't track your sleep if the device is on the charger).

The Ionic also offers cross-platform support. Android or Windows users don't really have the option of buying an Apple Watch, and Android comprises a huge part of the smartphone market -- 53% of U.S. smartphone users as of June 2017, according to comScore. Ionic will also be more affordable at $300.

Apple's biggest advantage will be the availability of third-party apps. Not only does Apple have a head start here, but Apple attracts developers like flies to honey. The last official app count was 8,500 Apple Watch apps in the summer of 2015, so this figure could easily exceed 10,000 at this point. To start, Fitbit's App Gallery will launch with just a handful of third-party apps. It will hope to grow its catalog going forward, but its ability to do so will be a function of adoption and whether or not Fitbit can grow the Ionic installed base; developers follow users.

The most notable hardware upgrade this year is the optional addition of LTE cellular connectivity, but whether or not this proves to be an important feature remains to be seen. Making phone calls from a smartwatch is hardly a compelling experience, and LTE-equipped models start at an even higher price point of $399. Apple can also command premium positioning with higher-quality materials like ceramic or stainless steel. Those $17,000 gold models may be long gone, but an Apple Watch Edition or Apple Watch Hermes can still set you back by $1,199 to $1,399.

The Mac maker also has other advantages in software, including Siri and other features related to artificial intelligence (AI). Apple can also afford to invest more heavily in fitness research. In a rare exclusive interview, Apple Director of Fitness for Health Technologies Jay Blahnik recently told Men's Health, "Our lab has collected more data on activity and exercise than any other human performance study in history." This data drives Apple's software development.

It's also worth noting that Apple has been investing heavily in other health-related initiatives, entering into partnerships with the medical community. In a recent interview with Fortune, CEO Tim Cook noted that not all of these efforts have commercial opportunities, but Apple pursues them because it believes it can add societal value. Apple can afford to invest in these types of efforts, while Fitbit's balance sheet is much smaller. To the extent that smartwatch consumers value expansive health initiatives, Apple Watch has an advantage.