Recent developments in artificial intelligence (AI) are turning science fiction into science fact -- and deep learning is at the heart of these advances. These AI systems have the ability to sift through scores of data, recognize patterns, and detect differences that might be imperceptible to humans. Some applications are already achieving remarkable results.

One of the more promising areas of research seeking to tap these capabilities is medicine. Companies like Alphabet Inc. (GOOGL -1.34%) (GOOG -1.29%), International Business Machines (IBM -0.91%), and NVIDIA Corporation (NVDA -2.51%) are using the predictive power of AI to provide doctors with additional tools to fight disease. 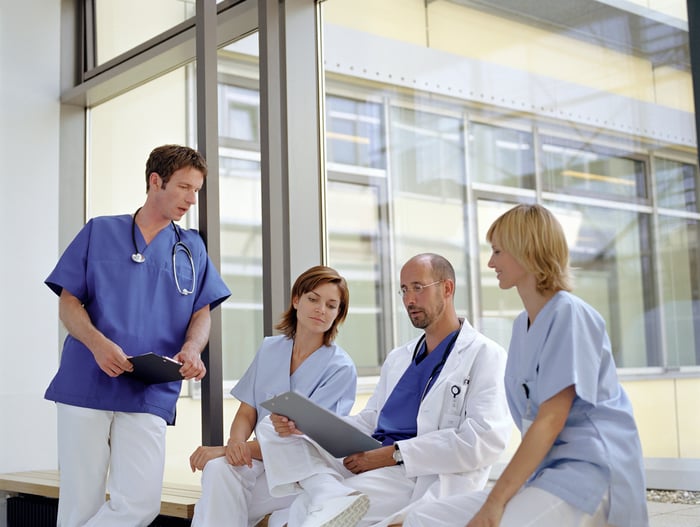 Two-year-old start-up Gritstone Oncology has attracted both attention and investment from Alphabet Inc.'s Google Ventures. The biotech company has been studying the use of deep learning to develop highly targeted immunotherapies, which recruit the body's immune system to fight cancer. Immunotherapy has produced significant positive results in about 20% of cancer patients but has been unsuccessful for the remainder. Gritstone is using AI to analyze tumors at the molecular level and narrow the list of immunotherapies to match them with specific patients.

Pharmaceutical giant Pfizer Inc. (PFE 3.59%) is collaborating with IBM's Watson cognitive AI supercomputer to discover new drugs and approaches for immunotherapy. Watson's consumed 25 million Medline abstracts, over a million articles from medical journals, records from 4 million patients, as well as every drug patent since 1861. The system is regularly updated with the latest available medical research data. What began as a pilot program became a full-fledged partnership when Watson suggested a novel treatment that had recently been recommended by Pfizer's team of researchers, and that therapy is currently undergoing trials.

One of the major causes of blindness is damage to the retina resulting from diabetes. Known as diabetic retinopathy (DR), the condition occurs in more than 40% of U.S. patients with the disease. There may be no symptoms in the initial stages, so early detection is critical. Unfortunately, there is currently a shortage of ophthalmologists qualified to diagnose the condition.

Researchers at Alphabet's Google Brain have developed an AI system that can examine images of the retina and detect DR as well as human ophthalmologists, according to a paper published in the Journal of the American Medical Association. The system exceeded the standards set by the National Institutes of Health for accuracy and precision. This technology can be used to provide screening for the condition in the absence of qualified ophthalmologists, preventing blindness in an untold number of patients at risk.

Verily, a subsidiary of Alphabet's Google, was able to use images of the retina to detect new signals of heart disease risk. Using data from nearly 300,000 patients, the AI system was able to detect indicators in retinal images of age, gender, blood pressure, and blood sugar, and use that information to estimate the risk of heart failure. The researchers published a paper claiming to have achieved accuracy levels equivalent to the results obtained using blood tests, though that paper has not yet been subjected to peer review.

HeartFlow is medical technology company that is using graphics processors from NVIDIA Corporation (NVDA -2.51%) and deep learning to create 3D mapping used to provide early detection of heart disease. Current methods to diagnose the condition involve a costly and invasive medical procedure. HeartFlow's alternative uses CT scans and deep learning to create a 3D model of the heart that can provide detailed representations of blood flow and blockages. Providing a more accurate diagnosis while eliminating the necessity of a costly procedure can reduce the associated healthcare costs by 25%.

Just what the doctor ordered

These recent developments provide insight into the future of AI-assisted medicine. AI is still in its infancy, and researchers have only scratched the surface in terms of the ways that AI will revolutionize medical care.