The highest valued U.S. start-up might finally see an IPO in 18 months.

Former Uber CEO Travis Kalanick often said it would be a long time before the company had an IPO. However, new CEO Dara Khosrowshahi said that a realistic timeline for an IPO places it in the 18-to-36 month range. That means the earliest date for an Uber IPO would be early 2019.

Uber has so far had no need to go public because investors have been flooding the tech start-up with cash over the past 8 years. However, those investors haven't been able to cash out. At this point, the $70 billion valuation is just paper money, and they're getting antsy. 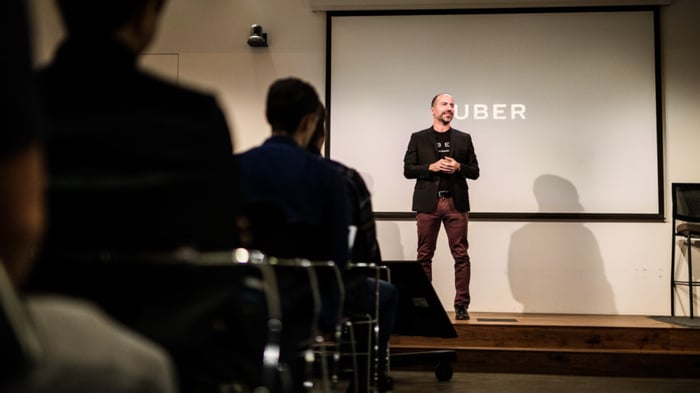 When you consider the tech IPO flops this year, namely Snap and Blue Apron (NYSE:APRN), it's easy to see why staying private and raising private capital can be a more appealing and less risky option. Snap stock is down about 40% since March to $14.72, while Blue Apron stock is down 45% since June to $5.51 at the time of writing.

Of course, it's important to note how financially stable a company is before it goes public. Facebook's annual net income pre-IPO was at $974 million, while Twitter had a net loss of $143 million and Snap had a net loss of $515 million. Meanwhile, Uber lost $2.8 billion in 2016. In fact, the company has already lost $708 million in the first quarter of 2017 and $645 million in the second quarter.

But Uber continues to rake in revenue, claiming $6.5 billion in revenue for 2016. This is significantly more than Facebook's pre-IPO revenue of $3.7 billion. Despite the list of Uber scandals that have been splayed across headlines this year, customers are still choosing Uber. The company still claims 75% to 85% of the ride-hailing market depending on what estimates you're looking at and reported a 16% increase in quarterly bookings for the latest quarter.

Khosrowshahi's main task is to cut down on Uber's losses to get it on a path to profitability that will appeal to investors ahead of its future IPO. During his first speech to Uber's team, Khosrowshahi said that he would concentrate on Uber's core ride-hailing business to "pay the bills." But he has to do this while also cleaning up Uber's tarnished image.

These tasks are too much for one person, even if Khosrowshahi has been praised for what he did as the former leader of Expedia. There he led initiatives to scoop up online travel company HomeAway for $3.9 billion and travel fare aggregator Orbitz for $1.3 billion. During his first talk with Uber's team, Khosrowshahi said he was eager to bring on a chairman for the board to help him. But that still leaves empty Chief Financial Officer (CFO) and Chief Operating Officer (COO) positions.

.@dkhos: Bringing in a chairman to be my partner at the Board level -- driving agenda & rhythm of the board -- is going to be super important.

Uber is clearly in need of an image makeover and a good CFO who can slim down its losses. But the fact that it reported $1.75 billion in revenue for the latest quarter, as well as a 16% rise in bookings show that the company is connecting with customers and stands the chance of having a successful IPO.

The bottom-line is that if Uber wants a different IPO outcome from Snap and Blue Apron, it has its work cut out for the next 18 months to three years.