Please ensure Javascript is enabled for purposes of website accessibility
Log In Help Join The Motley Fool
Free Article Join Over 1 Million Premium Members And Get More In-Depth Stock Guidance and Research
By Danny Vena - Oct 1, 2017 at 9:11AM

Both chipmakers are attempting to make headway in cutting-edge technology, but which one is a better option for investors?

Investing in companies that are developing state-of-the-art solutions for evolving technologies can be more than the usual stock-picking gamble. Choose the right one, and you can ride its success t excellent returns. Choose the wrong one and your investment dollars may disappear before your very eyes.

NVIDIA Corp. (NVDA 5.81%) has a long history of providing advanced graphics processing units (GPU's) built to upgrade the video game experience for hard-core gamers, but over the last several years, its fortunes have been tied to its move into providing processors for artificial intelligence (AI) applications. Ambarella Inc. (AMBA 6.19%) made its name providing the system-on-a-chip (SoC) that processed video images for the high-definition action cameras made by GoPro Inc. (GPRO 2.43%) and used in drones, but its future success will depend more on supporting the computer vision technology used by self-driving cars.

While computer vision and AI both provide significant opportunities, the question for investors could boil down to which company will be better able to capitalize on them. 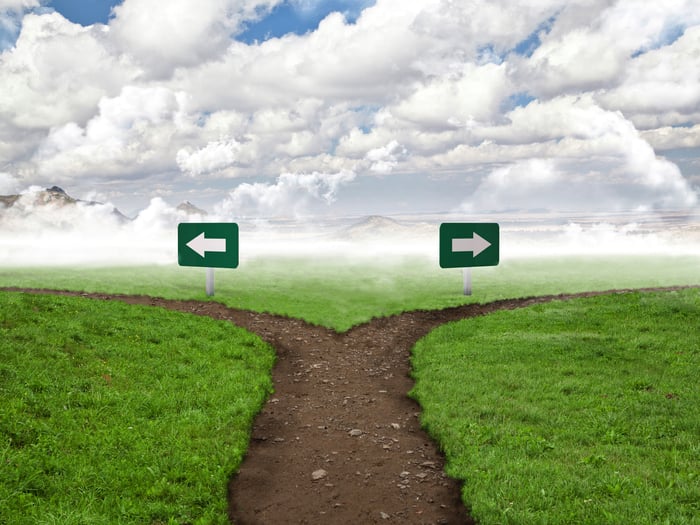 It is important for companies to keep an adequate amount of cash available to cover not only their day-to-day needs, but also unforeseen eventualities. As you can see, NVIDIA has significantly more cash on hand, as well as adequate ongoing cash flow to cover any eventuality, though its debt may seem high. While it is notable that Ambarella has no long-term debt, NVIDIA's balance sheet offers much more stability.

For several years, Ambarella rode the wave of enthusiasm among athletes for capturing their adventures using wearable high-definition cameras. The company's unique experience in video-processing chips made its partnership with action-camera leader GoPro a profitable one. A high concentration of sales to a single client is a double-edged sword, however, and when enthusiasm waned for GoPro's wares, it dragged Ambarella down too. Ambarella attempted to develop processors for drones, but it faced stiff competition in the space, and its efforts seemed too little, too late. It has been working to reduce its dependence on GoPro, but it recently revealed that GoPro would be using competing chips in future products.

Ambarella's 2015 acquisition of VisLab placed it squarely in the computer vision space, and its chips can be used by the automotive industry for self-driving systems, electronic mirrors, and parking assist sensors. Chips manufactured for that purpose are scheduled to ship in the second half of 2017. The company also anticipates growth opportunities that it could take advantage of by combining its video processing and computer vision for use in robotics and automotive products.

NVIDIA's GPUs have long been the favored choice among dedicated gamers, and that continues to be the case. In its most recent quarter, revenue from gaming grew 52% over the prior year quarter. The company's continued innovation and dominance in the space kept the competition largely at bay. This also gave it a cushion as it moved swiftly to secure a lead in the nascent area of AI; the same attributes that make GPU's exceptional at rendering graphics make them well suited to the heavy data processing that AI requires.

Those efforts are paying off: NVIDIA's data center segment, which houses its AI chips, has achieved triple-digit year-over-year growth in each of the last four quarters.

The company also has dozens of partnerships with automakers and original equipment manufacturers (OEM's) that are developing systems for self-driving cars. While the autonomous vehicle market only accounts for a small percentage of NVIDIA's current revenue, it could provide significant growth.

In its most recent quarter, NVIDIA's revenue grew to $2.23 billion, a 56% increase year over year, and AI accounted for 19% of sales.

Clearly, NVIDIA has produced better recent results than Ambarella. While both have huge opportunities, NVIDIA has already established a foothold in the booming field of AI; it's unclear yet whether Ambarella can make a similar move in computer vision. 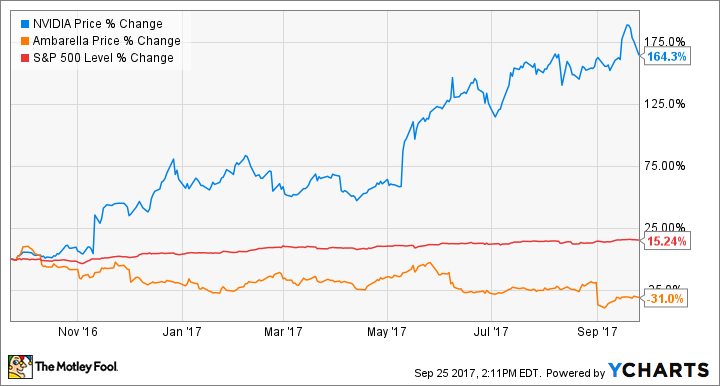 Over the last year, Ambarella's stock has fallen 31%, compared to the broader market's 15% gain. During the same period, NVIDIA's stock has increased a massive 166%. From a price-to-earnings perspective, NVIDIA trades at 49 times trailing earnings, indicating that investors expect it to maintain its torrid growth pace. Ambarella trades at a high, but less expensive multiple of 30.

Investors have to pay more for NVIDIA, but the growth picture for the stock is also a lot firmer.

It is pretty clear looking at the evidence that NVIDIA represents the better choice for investors now. Its rock-solid balance sheet, impressive growth, and early entry into the AI space have provided investors with significant gains. That growth could well continue, however, investors must be aware that at current levels, its valuation is stretched. One wrong move could result in a substantial correction in the stock price.