With the forthcoming iPhone X starting at $999, Apple (NASDAQ:AAPL) investors already know the company is about to enjoy a meaningful uplift in iPhone average selling prices (ASPs). After all, that's to be expected when a product moves further upmarket and create an even more expensive pricing tier. There's now another data point to suggest that the uplift could be rather substantial.

Historically, Apple offered three tiers, each $100 apart, but the company revamped that pricing structure in 2014. That year, the first $100 storage upgrade quadrupled capacity from a woefully insufficient 16 GB to 64 GB. The upsell opportunities were extremely compelling, and investors saw a noticeable uptick in ASPs that has largely persisted, even after Apple finally bumped up the base storage level to 32 GB last year in the iPhone 7 after years of criticism. The dip in ASPs in early 2016 was largely related to the introduction of iPhone SE at $400 (since reduced to $350).

Apple has again revamped its storage pricing this year. The Mac maker has also bumped up prices on the iPhone 8 and iPhone 8 Plus, in part because those models now start with 64 GB of storage. Apple has also simplified its storage pricing down to two tiers for all 2017 iPhones. Instead of $100 tiers, there is now just a single $150 upgrade to quadruple storage to 256 GB. 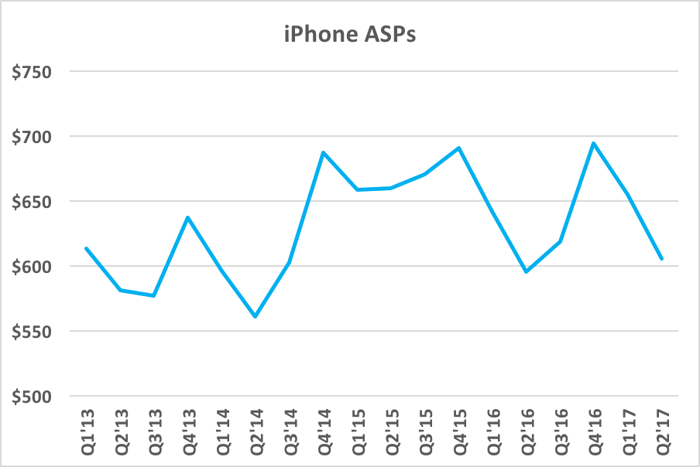 In a way, that could have been a risky move. The shift in 2014 was so powerful precisely because 16 GB is inadequate, virtually ensuring that a large number of buyers would opt for the middle storage tier at a minimum. Standing pat at 16 GB for so long was absolutely consumer-unfriendly, but it was a strong move for the business from an investing perspective. By including 64 GB on all base 2017 iPhone models, the risk is that 64 GB is sufficient and not many people choose to upgrade to 256 GB for $150. Those concerns may be misplaced.

Time for a new ASP record?

The current record for iPhone ASP is $695, which was set in Q4 2016. That record was driven by strong demand for the iPhone 7 Plus, which commanded the highest iPhone pricing up until this year. The iPhone 7 Plus started at $770 at launch, and its dual-camera system was exclusive to the larger Plus model. There was a $30 price increase compared to prior years associated with the dual-camera system alone.

The iPhone X has many ways to justify its $999 price tag, and it looks like a lot of potential customers are finding ways to justify a $1,150 price tag -- which is more than entry-level Macs. There's a good chance that Apple will set a new iPhone ASP record in the coming quarters.