Find out how Under Armour is "dealing with reality" in the challenging U.S. retail market.

Athletic apparel company Under Armour ( UA 0.10% ) ( UAA -0.13% ) has been under pressure lately. It ended its 26-quarter streak of revenue growth of more than 20% with disappointing results in the fourth quarter of 2016 (revenue was up 11.7% year over year), and the most recent quarter wasn't much better. The stock is down over 50% in the last 12 months. 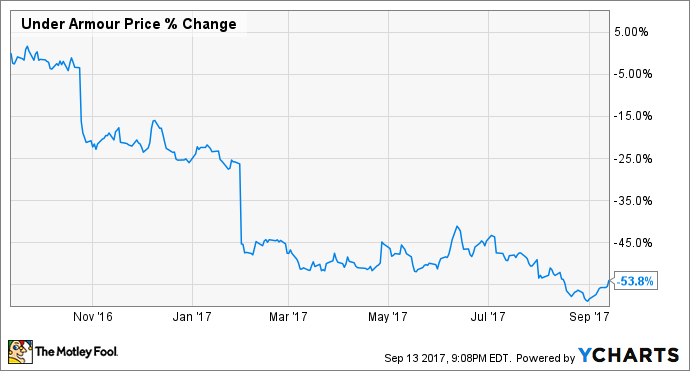 With the company still heavily dependent on the North American region (accounting for 83% of its 2016 revenue), investors are concerned about its plan to deal with the challenging U.S. retail environment.

CEO Kevin Plank and CFO David Bergman were interviewed during a retail conference hosted by Goldman Sachs early in September. Plank said that the company was "dealing with the reality and the hand it's dealt." Bergman covered details about what the sports apparel retailer learned from last holiday season, the importance of its digital efforts, and how it could get back to mid-20% growth again. Let's take a look at some of what they had to say. 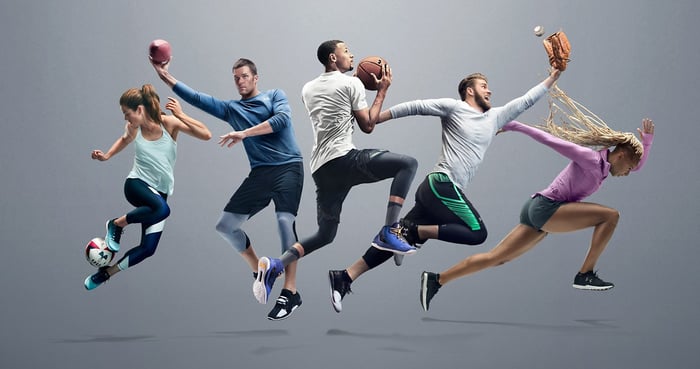 One of the first questions during the presentation focused on how management was going to deal with the aggressive pricing that is becoming more prevalent in the North American retail market. Bergman talked about what the company is going to do differently based on what it learned from the highly promotional environment last holiday season. "... the product assortment is going to be different," he said. "We're going to have a more complete assortment ... to meet the needs of any change in the weather, being able to make sure that we've got more newness and more freshness on the floor."

Having a more complete product assortment means having a "good-better-best strategy." For each type of product, having several value points gives customers options, Bergman said, allowing them to choose the "right price to value ratio" -- and helping the company compete in a promotional environment.

"Newness and freshness" on the floor refers to a faster supply chain that moves returns from wholesale partners quickly into Under Armour's factory outlet stores and replaces that returned product with something new and full price on the wholesale partner's shelf.

Lastly, the company says it's prepared no matter what the winter weather brings. Bergman talked about "layering" and having products that are designed so a customer could use them under or over clothing to add a layer for warmth.

When asked about how the company's U.S. distribution (how the company delivers products to customers) might evolve over the next five years, Bergman touched on its company-owned stores briefly, but quickly transitioned to the company's investment in digital. He said the company is slowing down on its full-price Brand House stores in North America and focusing on digital sales. "We're very comfortable with the distribution that we have. We don't see needing to bring on any large big box customers in the near future," Bergman said. "Will we be opportunistic in some smaller areas to be able to help continue to expand and grow women's, for example, footwear for example? Sure. But are there going to be any significant big boxes that we feel we need? Not at this time."

I'm glad to see that the company is pulling back on more brick-and-mortar stores and choosing to invest in its digital properties instead. Bergman also talked about a "single view customer" and Under Armour's partnership with SAP, a multiyear initiative to incorporate all the customer data from purchases, its three fitness apps, and other customer information into one system. The company went live with SAP in July, but it will take a while to see these benefits materialize into revenue growth.

Bergman further underlined the importance of digital by saying that the company was organizing all its systems, digital, and connected fitness efforts under Paul Fipps, who was recently promoted to be Under Armour's chief technology officer, reporting directly to the CEO. Bergman went on to explain that this organization change will ensure the company is able to "... really leverage all that data and all the information that we're learning from our customers."

A return to stellar growth?

Management was also asked about the company's fourth-quarter growth target in the low- to mid-20% range.

Bergman laid out why he felt good about the company achieving its targeted growth. First, he reiterated the lessons learned from last Q4 and indicated that the company would have products to meet any weather. Second, he said the fourth quarter typically has the highest percentage of direct to consumer sales, and as a result "much more we could control directly." Last Q4 the company had 39.6% of its revenue from the direct to consumer channel. Third, international growth is robust, delivering 57% growth last quarter.

Plank summed up his feelings about how the company is thinking about the North American market, which is critical to the company's growth.

And for us it is a company with roughly 80% of our business reflected here in North America. We continue to see great opportunity, we believe we can win in North America. ... as we think about the world right now, ... it's a difficult environment. You would've maybe heard me characterize words like that as loser talk in the past.

It was good to see the CEO has a strong belief that the company can succeed, and his chief financial officer has the plans to back it up.