While Calumet Specialty Products Partners (CLMT -4.44%) and Delek US Holdings (DK -3.44%) both focus on the downstream segment of the oil market and operate refineries, that's where their similarities end. Calumet so different is a master limited partnership (MLP) that makes most of its money manufacturing specialty petroleum products. Delek, on the other hand, operates a diverse set of refining and logistics assets. It controls not one, but two MLPs: Alon USA Partners (NYSE: ALDW) and Delek Logistics Partners (DKL -0.21%). While those differences are important for investors to consider, one factor sets Delek so far apart from Calumet that it's the clear better buy between the two.

Not your traditional MLP

While Calumet Specialty Products Partners' chosen corporate structure is an MLP, it's quite different from others in the space. Instead of owning pipelines and storage terminals, as do Alon USA Partners and Delek Logistics Partners, that generate relatively predictable cash flow from fee-based contracts, Calumet operates refineries and specialty product manufacturing facilities. So its earnings can fluctuate wildly due to its direct exposure to commodity prices. This volatility has proven problematic over the past year, for example, during which its adjusted earnings before interest, taxes, depreciation, and amortization (EBITDA) has swung between $92.9 million and $261.9 million per quarter. 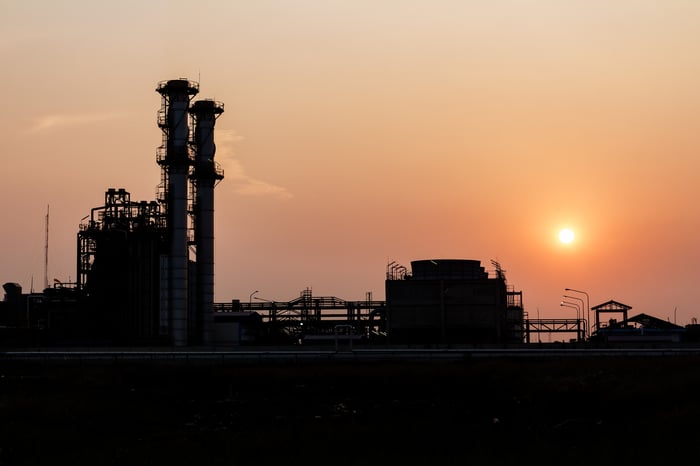 One of the problems caused by the fluctuation in earnings is that Calumet's leverage ratio spiked to a dangerously high 22 times adjusted EBITDA last fall, and remains an unnerving 7.7. That huge spike in the leverage ratio is one reason why Calumet stopped making cash distributions to investors, choosing instead to retain that money and use it to improve its financial situation. While the company continues working on solutions to address its financial problems, including undertaking a variety of self-help initiatives and asset sales, it's not yet on sustainable footing.

Focused on its niche

Delek, on the other hand, is a traditional independent refiner. While that means it has direct exposure to volatile commodity prices, the company has taken steps to mitigate their impact. For example, it operates a growing portfolio of fee-bearing logistics assets alongside its MLPs. Delek Logistics Partners alone has the potential to produce $179 million of annual EBITDA, which will enable it to send predictable distributions back to its parent company.

In addition to that stable income source, the company has a much stronger balance sheet. At the end of last quarter, Delek had nearly $790 million in cash against $1.4 billion of consolidated debt. That said, Delek Logistics Partners held the bulk of the debt, which is noteworthy for two reasons. First, the MLP had a conservative leverage ratio of around 3.85. In addition, Delek had a net cash position of $141.9 million last quarter if we back the MLP's debt out of the equation. Thus, Delek has a strong balance sheet overall.

Because of that, Delek has been able to pay a consistent dividend to investors each quarter. The company also has the financial strength to repurchase shares and invest in growth projects, which are out of the question at Calumet given its tight financial situation.

Delek has been able to leverage its financial position to make acquisitions, including recently closing the purchase of fellow independent refiner Alon, which doubled the size of the company. One of the benefits of the deal is that Delek expects to save $95 million per year by capturing corporate, cost of capital, operational, and commercial synergies. Those cost savings will enable the company to generate more cash flow that it can use to create additional value for investors. Contrast that approach with Calumet's: The company has been shedding assets to cut leverage so that it can stay afloat.

A much lower-risk way to invest downstream

While Delek and Calumet both operate downstream energy businesses and have direct exposure to commodity prices, Delek has done a much better job insulating its operations from the impact of price fluctuations. As a result, it has a much stronger balance sheet, which gives it the flexibility to pursue more growth opportunities while still returning capital to investors. That factor makes it a less risky way to invest in this niche segment of the energy market, which is why, in my opinion, it's the better buy over Calumet these days.