Facebook's spending millions on content that nobody wants to sit through.

The good news: People are spending a longer time, on average, viewing videos in Facebook's (META -0.76%) Watch -- the company's new video platform -- than in their news feeds.

The bad news: They're spending only about 23 seconds per video.

Facebook is betting big on Watch, with plans to spend as much as $1 billion on content to seed the platform. Success hinges on the social-media giant's ability to generate substantial ad revenue from video views, which is really hard when most people abandon the videos after just a few seconds, according to data from video-analytics company Delmondo, as reported by Digiday.

Considering Watch is focused on longer-form content ranging anywhere from five minutes to 30-minute TV-style series, 23 seconds is a very low average. YouTube -- clearly a platform Watch was modeled after -- garners much higher average watch times. The ad revenue from YouTube has produced a thriving ecosystem of creators and has been a big revenue driver for Google, the Alphabet (GOOG -0.27%) (GOOGL -0.21%) subsidiary. 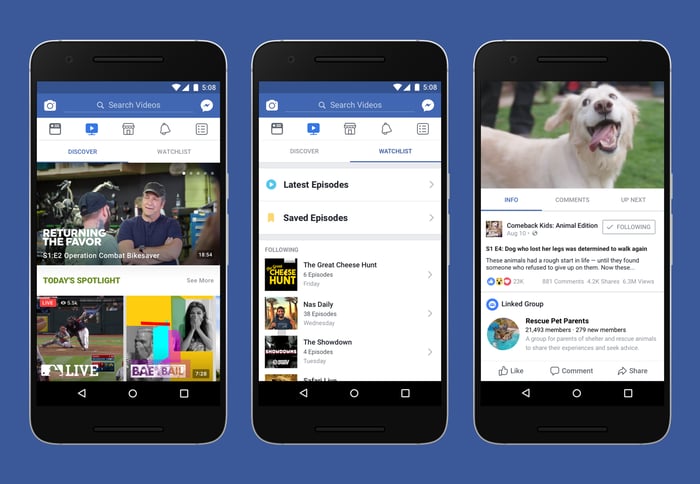 Are mid-roll ads turning people off?

Facebook introduced mid-roll video ads earlier this year. They're reserved for longer-form videos like those found in Watch and don't start until at least 20 seconds into the video. That's interesting in the context of Delmondo's data showing the average view time of 23 seconds. That implies most people are ditching the videos before the mid-roll video ad plays.

The data aligns with an earlier report from Digiday, which found most publishers aren't seeing much success with the new ad format. Advertisers aren't seeing a very good return relative to the number of views their videos receive. Facebook counts a view as a user who spends just three seconds watching a video, which means a "view" doesn't necessarily result in an ad view.

By comparison, YouTube uses a pre-roll video ad format (in addition to mid-roll ads). Before a user can even get a taste of the video content, he or she has to sit through an ad. The ad can be as short as six seconds. The result is more ad revenue and higher viewer retention. YouTube will generate an estimated $2.6 billion in ad revenue in the U.S. alone this year, according to eMarketer.

Facebook CEO Mark Zuckerberg has been against pre-roll video advertisements since Facebook started pushing video into users' news feeds. Facebook auto-plays videos in the news feed, and a pre-roll ad would be disruptive to the experience. But Watch is a different product, where users go specifically to seek out video content. YouTube-style ads could produce much better results, if Facebook can't find a way to persuade users to sit through ads in the middle of videos.

As mentioned, Facebook is investing heavily in content for Watch. It's already producing several short-form original series, and it's licensing highlights from the NFL. It's also reportedly in talks to produce big-budget hour-long dramas, with costs up to $3 million per episode. Facebook is also making a big advertising push for Watch, buying television commercials during big events such as Monday Night Football.

The quality of entertainment content on Watch appears to be on par with YouTube. Sports content licenses with the NFL and MLB give Facebook a big point of differentiation. And if Facebook signs a flagship drama series, it could provide yet another boost. The key is to get users to see Facebook as a place to watch all the content Facebook is paying for, instead of just a feed of random photos and videos.

YouTube shows how much potential there is if Facebook can become a destination for video content. With Facebook running out of room to show people more ads, Watch is a big opportunity to unlock additional revenue growth from the increasing amount of video views on Facebook. Management certainly has more insight into what's causing users to abandon videos, but it seems mid-roll ads aren't the best solution for monetizing Watch.